An interview with Hank West 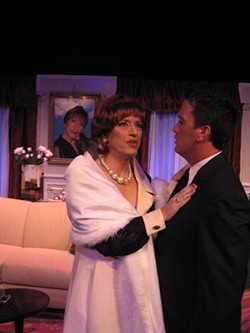 Queen City Theatre Company will be delighting lovers of spoofs, satires, nostalgic homages, and crossdressing with a grand mishmash of a comedy, Die Mommie Die! opening this week at Spirit Square. At the center of this looniness is aging film queen Angela Arden, striving to revive her sputtering career -- and desperately clinging to her illicit love.

So who better to put the queen back in Queen City than Hank West, the grand dame of the Charlotte stage scene who helped launch the company last year as the flaming Brother Boy in Sordid Lives? West is old enough to remember the celluloid queens conjured up by cult hero Charles Busch, who played Arden in the 2003 film before trotting her out in Mommie's off-Broadway debut last fall.

Pin-ups have been a Hollywood staple since the Jazz Age. In his script, Busch dissects the less glamorous spectacle that followed as quondam queens like Bette Davis, Joan Crawford, Tallulah Bankhead, Susan Hayward and Gloria Swanson gracefully devolved into decrepitude. Like Busch, West grew up adoring those films, and he can certainly empathize with the prospect of crafting a second act in a stage career.

Except in his case, the experience hasn't been humbling. West's ascent began late in 2006 when he was mired in a Bermuda Triangle of difficult projects, the title role in Nijinski's Last Dance, the elfin Crumpet in Santaland Diaries, and his second swipe at Mozart in Amadeus. We can presume that West's silliness as the great composer fired the imaginations of QCTC co-founders Glenn Griffin and Kristian Wedowski, both of whom were standouts in the CPCC production alongside His Hankness.

The official coronation as Brother Boy occurred less than nine months after West removed his Amadeus hosiery for the last time.

With typical caution, I opined: "The new Queen City Theatre Company has found a dream queen in Hank West, and his exploits in Sordid Lives are reason enough for all fanciers of Texas trash to make pilgrimage to Spirit Square."

Already on our radar since the dawn of the Loaf Age and West's first Mozart ordeal, we anointed him Actor of the Year in 2005. Loaf readers capped West's meteoric ascent, making him their Best of Charlotte choice for 2008, and the MTA Awards crowned him Best Dramatic Actor for his starring role in Richard III this past summer.

So we figured it might mot be a bad idea to talk with him about Die Mommie Die!

Creative Loafing: Isn't this a complicated role to play? Do you look at the movie, or do you studiously avoid the movie?

Hank West: No, I don't look at the movie. I saw it maybe a year or two ago. A friend of mine taped it and showed it to me. It's kind of like when I saw the movie of Sordid Lives. I hated it. I didn't get it. And I didn't get the play Sordid Lives, either, to be honest. But for some reason, I think this is better onstage than as a movie. I think it plays better.

I'm just such a movie buff. So in a way, this is my way of showing my appreciation for those old-style films, because you don't get that anymore. Whether good or bad. So with these kids in this play -- I have to explain things to them. Which is cool. They don't know who these people are!

We've crossed over to a throwaway culture. Back then, the stars that we saw in the bloom of their youth were still around at middle age and beyond.

So do you do these Hollywood dames and let the chips fall where they may, or is there inevitably a crash course that you have to go through to ferret out all the screen references that the author of the play -- who performed the role you're attempting -- was slyly communicating?

I think it helps if you do get some of the references. I see so many references to different films, at least in the direction we're taking. In the scene where her husband dies, I don't budge, and it reminds me of Bette Davis in Little Foxes, where she doesn't budge until she knows it's too late. But there are different references to different movies that come back to me. I just grew up on these movies, watching them on TV at night, and they kind of come back to me.

None of these women who were supposedly targeted ever played a has-been movie star.

Except Sunset Boulevard, which is my all-time favorite movie.

So go over who's who in the show.

We've got Joe Rux, he's playing Sol, my husband. He's wonderful. I've never worked with him before, so I'm enjoying that so much. I've always enjoyed watching him. My agent, Jorja Ursin, is playing the maid, Bootsie.

Who is a piece of work in this.

Yes, she is a piece of work. Matt Kenyon is playing my son, Lance.

He gets to be a little more flamboyant than he was in Dog Sees God.

He is, and Steven Martin is playing my lover, Tony Parker. And this girl from Catawba, Jess Dugger, she's great -- she's playing the daughter. She's just a dynamo. It's been a wild ride. I love old movies so much, and this is one way I can step into that. I won't start doing makeup until Tuesday.

Dress rehearsal for you should be a bitch.

I think they told me I have seven or eight costumes.

So you're going to get a dresser?

I better. God, I hope I do. I've been working in heels since we started rehearsal, and I have a deep admiration for women -- it's tough! I don't know how they do it or why they would want to do it.