If he builds it, they will come 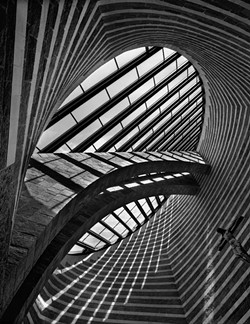 "Memory is very important in contemporary expression," Swiss architect Mario Botta passionately stressed in an opening reception at the Bechtler Museum of Modern Art. A woman stood at his side, translating his Italian to English. At the Bechtler's Mario Botta: Architecture and Memory exhibit, Botta's mantra is expressed through more than 30 black and white photographs, sketches and models.

The works, spanning 50 years of his postmodern designs, highlight Botta's noteworthy contributions to libraries, theaters, museums and religious institutions across the globe. These constructs offer plenty of room for both inspection and reflection — just seeing them along the walls will make you want to splurge and book a flight to see them up close. The alluring photos reveal that the shell is equally as critical as the core; both exteriors and interiors illustrate Botta's defining vision. Just as theaters take audiences to some fictional or historical place and time, Botta's designs offer the same artistic service.

Charlotteans can boast of his noteworthy execution of the Bechtler Museum. The exterior, a sleek brick building with an extruded top, striking columns and linear angles, conveys comfort and innovation. It's also only the second commission that Botta has accepted in the United States (the other being San Francisco's Museum of Modern Art).

In regards to the Bechtler, he explained the need for the construct to be more than just a museum. Botta strives to create a collective space with a surreal, meaningful vibe. The museum adds levity to the city's business and banking hub. The interior is a chic, spacious setting for those who want to explore the array of art showcased from year to year.

But back to the exhibit.

The André-Malraux Cultural Center, which he constructed in Chambéry, France, is a prime example of how the contemporary meets the past in his designs. The venue features a large circular side that resembles a Roman amphitheater, with futuristic cutouts for entryways, windows and columns. Botta uses a contrast of vertical and horizontal lines to add extra depth. His Cathedral of the Resurrection in Évry, France, also features that circular exterior, oddly adorned with a rooftop of living — though displaced — trees. Both of these large structures are defined, not by size, but by a creative consistency easily identified as Botta's once one becomes familiar with his work.

This striking element makes its way into Botta's smaller designs, too. The modernistic Church of San Giovanni Battista in Mogno, Switzerland, sits in the heart of the Alps. The interior is a Beetlejuice-esque wonderland, with curves and twists that convene into one large, weightless type of space. The alcove features a striking optical illusion with lighter and darker lines, making it appear to grow smaller and smaller through subsequent arches. Another of his smaller gems is the Garnet Chapel, found near a remote Austrian village. The exterior resembles a finely cut gemstone while the interior is a woody, meditative setting, enhanced by the geometric structure's oddly angled walls.

All in all, Botta's works on paper and models in the exhibit are a great introduction to the vast span of his career. His structures and techniques make for interesting conversation for both architecture buffs and strangers alike. Still, you'll long to see some of these structures in person. Just do it.