Balkanize me: Euro Grill and Cafe

For more than a decade, one stretch of Central Avenue has been home to Charlotte's small (estimated at 2,000 residents), yet emerging, Balkan community. Nova's Bakery, owned by Vlado and Sladjana Novakovic, relocated from South End to Plaza Midwood in 1998; Dino and Amela Mehic's Bosna Market opened in 2003; and brothers Djordje and Branko Avramovic opened Intermezzo Pizzeria in 2007.

Before food trucks barreled onto the culinary highway, the ethnic "shop and eat" genre provided one of the few places to enjoy a limited number of comfort foods, typically street foods, of a region or country. Not surprisingly, the Mehics have relocated their grocery store down several blocks on Central and have opened a small eatery: Euro Grill and Café.

Now located in the spot formerly occupied by Kiên Giang Food 2 Go and the adjacent space, the Mehics have significantly improved the entrances from the rear parking lot and the street. From the parking lot, you must pass through the market and descend a few stairs to enter the small dining space, which has not changed much since its previous owners. The walls are still green and flecked with small mirrors. The handful of tables seems to fill quickly whenever an important soccer match beams from the corner television. 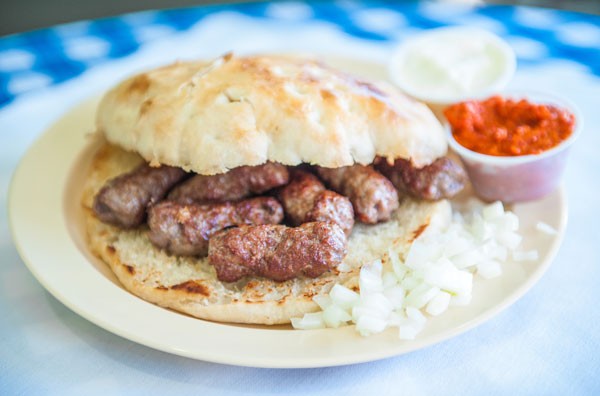 Nothing bespeaks Balkan comfort food like cevapi, a form of minced and grilled meat, and savory hand pies. One of these pies, burek, or börek, has its culinary roots in Turkey's Ottoman Empire and is popular throughout southeastern (Balkan Peninsula) Europe. At Euro Grill, the spiraled burek, filled with ground beef, is best eaten warm. Other pies made here are the sirnica, which oozes cheese, and the zeljanica, a mixture of spinach and tangy farmers' cheese.

But most expats come to Euro Grill for the cevapi, minced beef kebabs similar to Lebanese kafta. Cevapi is described on the menu as "skinless sausages," but that term is confusing here in the South, where sausage is assumed to be uncooked, probably pork and mixed with offal. Cevapi is the national dish of Bosnia, but commonly found throughout the Balkan Peninsula. At Euro Grill, a grouping of grilled cevapi arrives on wonderfully hot lepinje, a yeast-raised round bread more akin to focaccia than pita, and is scattered with thin slices of white onion. Cevapi is available in either five or 10 pieces, plain or with spice (sudzukice), but you will need to order either a side of kaymak ($.50), a clotted cream; or ajvar ($.50), a red pepper relish bread spread, to accompany your cevapi.

Red peppers are essential to southeastern European cuisine: Ajvar and tins of paprika, both mild and hot, are available in the market. Also of note in the market are large bags of poppy seeds, Turkish-styled ground coffee, ready-to-cook cevapi, frozen pastries and an assortment of cheese, dairy products, candies and snacks. Bread from Nova's is sold here as well.

Turkish coffee is offered throughout the day in the café. Other beverages available include kefir; Radenska, a popular mineral water; and Fanta Shokata, a blue soft drink based on the flavor of the elderberry. House-made desserts, including cakes, are modest in the tradition of neighborhood joints everywhere.

In addition to the cevapi and pies, the menu offers schnitzel, salads and an eggplant Napoleon: slices of tomato, fried eggplant, fresh mozzarella on a slice of toast. One dish that doesn't attain any traction is the gyro, a messy affair (plated, not wrapped) with thin slices of processed Americanized pressed gyro meat served on warm lepinje slathered with tzatziki and highlighted with slices of onions and a generous amount of yellow and green bell peppers. Most entrées are $8 and $9; savory pies are $4.49.

In Europe, as in Asia, much of life occurs on the street. For those who complain about the lack of ethnic culinary diversity in Charlotte, here's a recently opened spot that offers the opportunity to explore some accomplished versions of inexpensive Bosnian street foods.