Being John Malkovich, The Grey among new home entertainment titles | View from the Couch | Creative Loafing Charlotte
Switch to the mobile version of this page.

Being John Malkovich, The Grey among new home entertainment titles 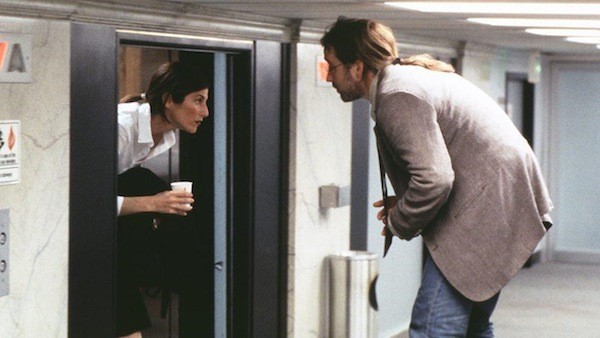 BEING JOHN MALKOVICH (1999). Playing by its own rules every step of the way, Being John Malkovich is clearly the sort of movie that needs to be made more often — that is to say, the film medium is one of endless possibilities, and it's depressing to note that most filmmakers are content spinning variations on the same themes when they could be unleashing their imaginations and going for broke. That's certainly what director Spike Jonze and screenwriter Charlie Kaufman (both making attention-grabbing film debuts) did with this blazingly original comedy in which a talented puppeteer (John Cusack), unhappily married to a meek animal lover (Cameron Diaz), is forced to take a filing position at a business that's located on Floor 7-1/2 in a New York skyscraper (look for The Help's recent Oscar winner Octavia Spencer as the woman who shows him how to get to the floor). It's here that he falls for a chilly co-worker (Catherine Keener) and later discovers a portal that literally takes him inside John Malkovich's head, where he's able to see everything from the actor's point of view for 15 minutes (thus taking the concept of everyone getting their 15 minutes of fame to a previously unrealized level) before being spit out next to the New Jersey Turnpike. For his part, Malkovich realizes something strange is happening with his own body and asks his friend Charlie Sheen for advice. The notion that anybody would turn to Charlie Sheen for advice (even back in '99) is one of the film's humorous conceits, but that's just the tip of the iceberg. "Do you see what a metaphysical can of worms this portal is?" asks Cusack, and this question serves as the springboard for the film's grappling with issues of personal responsibility, sexual identity, and rampant voyeurism. This earned three major Oscar nominations — Best Director, Best Original Screenplay and Best Supporting Actress (Keener) — but absurdly overlooked was John Malkovich, whose performance as the fictionalized John Malkovich is nothing short of brilliant.

DVD extras include audio commentary on select scenes by "Jonze's friend and competitor the filmmaker Michel Gondry"; a behind-the-scenes featurette; an interview with Malkovich by humorist John Hodgman; an interview with Jonze; and the short film An Intimate Portrait of the Art of Puppeteering. 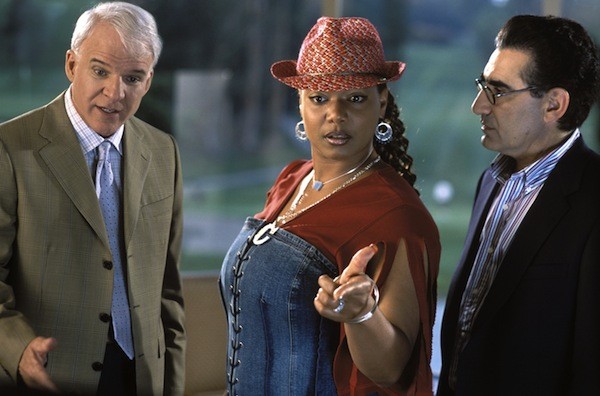 BRINGING DOWN THE HOUSE (2003). Just because Larry King called this "One of the funniest movies ever" — the evidence is right there on the Blu-ray cover — doesn't mean the rest of us have to similarly lose control of our mental faculties. Still, this box office hit isn't nearly as awful as its reputation, thanks primarily to its three central performances. Racially charged in a manner that some at the time found offensive while others considered it envelope-pushing, this broad comedy relates what happens when black ex-convict Charlene (Queen Latifah), insisting she was framed, forces whiter-than-white attorney Peter Sanderson (Steve Martin) to look over the case and try to clear her name. As they work together, sharp-witted Charlene must cope with a parade of wealthy bigots (Betty White, Joan Plowright, Missi Pyle) while stuffy Peter learns lessons in "cool" that allow him to bond with his kids and win back his ex-wife (Jean Smart). The story is utter nonsense, but what makes the film somewhat work are the terrific comic performances driving it: Martin hasn't been this engaging in years; Queen Latifah is sexy, sassy, spirited and smart; and scene-stealing Eugene Levy, as a nerd who discovers his inner funk after falling for Charlene, briefly made the case that he was one of the best second bananas in modern movie comedy — for his work in that same year's A Mighty Wind, he earned Best Supporting Actor honors from the New York Film Critics Circle.

The film has been released on Blu-ray as a "10th Anniversary Edition" (which would actually be 2013, but never mind). Extras include audio commentary by director Adam Shankman and writer Jason Filardi; a behind-the-scenes featurette; deleted scenes; a gag reel; and the music video for Queen Latifah's "Better Than the Rest." 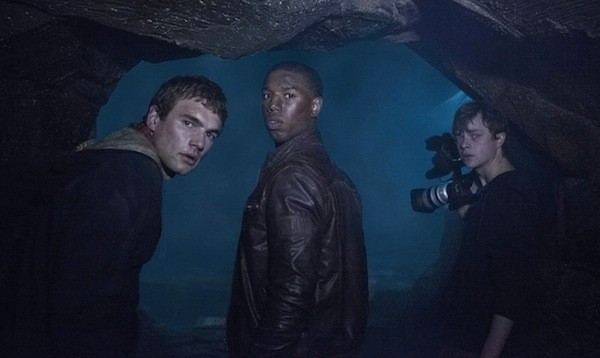 CHRONICLE (2012). The exclusive property of the horror genre, the "found footage" style of filmmaking that's been employed in such movies as The Blair Witch Project, The Last Exorcism and Apollo 18 (to name but three of many) has now been co-opted by Chronicle, a picture that's half science fiction, half teen melodrama. With this first push of the envelope's edge, should we now expect, say, a "found footage" musical or a "found footage" Western? Let's hope not, for one of the weaknesses of Chronicle is that its "ff" format plays exactly like the gimmick it most assuredly is. That proves to be an occasional distraction in this surprisingly adept yarn about three high school boys — Andrew (Dane DeHaan), Matt (Alex Russell) and Steve (Michael B. Jordan) — who gain telekinetic powers after stumbling into a hole housing what seems to be the kingdom of the crystal skull. But this isn't a family-friendly superhero flick like The Incredibles or Sky High, nor is it a costume-clad wish-fulfillment fantasy like Kick-Ass or Super. Instead, it grounds its science fiction in high school fact while taking uncomfortable detours into Columbine territory. Because even as Matt and Steve, two all-around popular kids, are enjoying their newfound abilities to fly through the clouds or pull harmless pranks on unsuspecting folks, the socially inept Andrew, suffering from a brutal home life (Mom's dying, Dad's a bullying drunk), can't quite contain his extraordinary power and begins to view it as a way to get back at a cruel and insensitive world. Given the low budget, the special effects are astonishing, but that doesn't mean I wanted them to dominate the final portion of the picture. Unfortunately, writer-director Josh Trank and co-scripter Max Landis allow the film to get away from them, moving from sober-minded intrigue to surface bombast. Still, the two men, both making their feature-film debuts, do enough right to insure that Chronicle serves as a potent calling card.

The Blu-ray contains both the theatrical version and an extended director's cut. Extras include a deleted scene; brief looks at the visual effects; and the theatrical trailer. 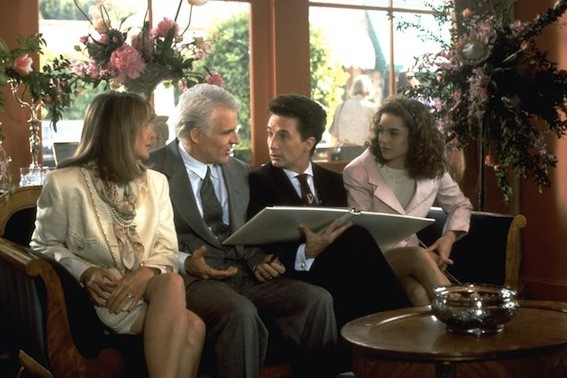 FATHER OF THE BRIDE (1991) / FATHER OF THE BRIDE PART II (1995). Given the excellence of 1950's Father of the Bride, a Best Picture Oscar nominee starring Spencer Tracy as the father and Elizabeth Taylor as the bride, the 1991 remake couldn't possibly have been more needless, though it at least gives Steve Martin a role which suits his wild and crazy talents. He stars as George Banks, who finds himself repeatedly losing it in the face of his daughter's (Kimberly Williams) upcoming wedding. Martin's in fine form, but as his wife, Diane Keaton is only given reaction shots usually allotted in films to the family dog, while a little of Martin Short's foreign, effeminate wedding planner Franck Eggelhoffer goes a loooong way. Just as the 1950 original was followed by 1951's Father's Little Dividend, this one was followed four years later by Father of the Bride Part II, in which George freaks out when he learns that both his wife and daughter are simultaneously pregnant. Like a trained monkey, Short is trotted back out for more of his mincing shtick — here, Franck is hired to plan the baby shower, a pretty feeble way to keep his character in the story. Perhaps the most unattractive quality of both films is the ugly obsession with material excess; for starters, we're supposed to feel sorry for George, who owns his own sneaker-manufacturing company, because his upper-upper-middle-class lifestyle can't compare to the filthy rich one of the groom's family. Be still, my bleeding heart. 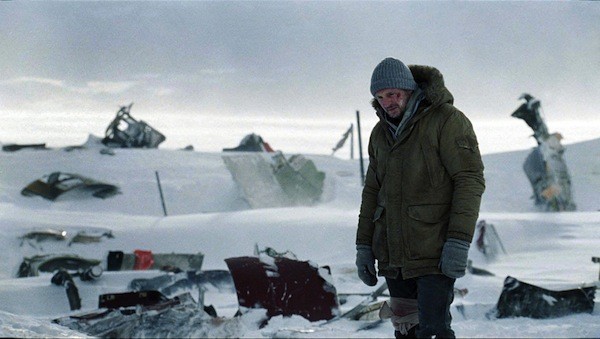 THE GREY (2012). After presenting Mexico City as the ultimate hellhole on Earth, Tony Scott's 2004 Man on Fire ends with a credit stating that the city is actually "a very special place." Sydney Pollack's 1993 The Firm assures us that Cayman Island officials look down on the sort of money laundering occurring in the film. And best of all, Irwin Allen's 1978 The Swarm gives a shout-out to our buzzing buddies by adding a credit which notes that "the African killer bee portrayed in this film bears absolutely no relationship to the industrious, hard-working American honey bee to which we are indebted for pollinating vital crops that feed our nation." Unfortunately, no PSA announcement accompanies The Grey, which presents the often misunderstood wolf in such a vicious and uncompromising light that I expect Sarah Palin will buy this film on Blu-ray and watch it at least a dozen times before Memorial Day. Of course, all two- and four-legged creatures are fair game when it comes to presenting them as movie villains — even bunny rabbits and a slobbery St. Bernard had to play the heavies in Night of the Lepus and Cujo, respectively — and the wolves on display here are indeed intimidating. Granted, they often look like animatronic animals on steroids, but they certainly put the fear of God in the human protagonists. The prey in The Grey is a group of oil-rig workers whose plane crashes in the Alaskan wilds. The no-nonsense Ottway (Liam Neeson) appoints himself leader and attempts to lead the other six survivors out of the wilderness — no small task given not only the punishing elements but also the savage wolf pack that's picking them off one by one. To its credit, The Grey tries to add a little substance to its terror-tale premise, but Ottway's soft-gaze flashbacks to his long-gone wife and the religious chats among the men (complete with a scene where Ottway yells at the heavens above) only skim the surface of any true existential analysis. And while there are a couple of good sequences focused on the brutal landscape, the man-on-wolf action is both fleeting and feeble — anemic enough that even Twilight haters might join Team Jacob rather than watch this shaggy undertaking.