For families entering the BofA Tower via the overpasses from the nearby parking garages, navigating to the North Carolina Dance Theatre's annual production of The Nutcracker could be a little confusing last weekend — particularly if you were a newcomer last Saturday night and your overpass took you across College Street. A posh wedding downstairs in Founders Hall added to the bustle and barred balletomanes from traversing the nuptials on their way to Belk Theater.

Instead you had to pass by the lobby of Booth Playhouse, where ticketholders to another Nutcracker — Caroline Calouche & Co.'s Clara's Trip: A Nutcracker Story, to be precise — were standing in line, including some lost souls who believed they were picking up tickets to the NCDT production. Aside from the customary din, there were the earnest inquiries about where to find The Nutcracker, followed by Booth ushers answering those inquiries or sternly contradicting any misinformation they heard. Bystanders answering those inquiries or correcting that misinformation added to the merriment.

Sorry about my rudeness, by the way. I did raise my voice once after 20 minutes of trying to watch a nice wedding.

Of course, there was no such confusion if you approached the Performing Arts Center from Tryon Street. Signage outside and a cornucopia of nutcrackers in the Belk lobbies assure young and old alike that this is the place foretold in NCDT's radio and TV ads. Crowd watching is far more enchanting in such surroundings, sprinkled with aspiring ballerinas in their glittering princess attire. 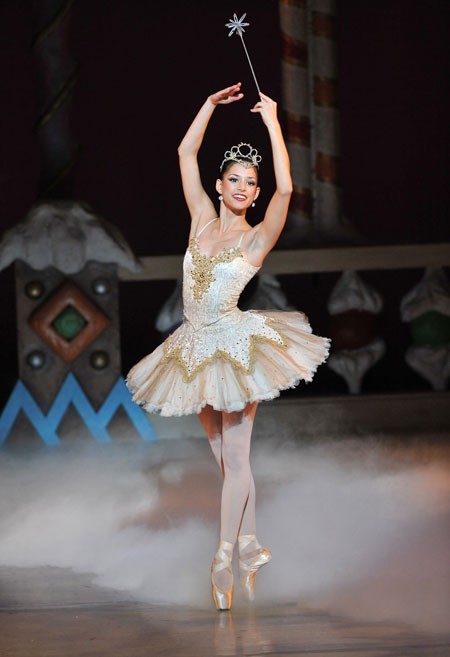 The spectacle doesn't change much from year to year once the curtain goes up: choreography by NCDT's distinguished artistic director, Jean-Pierre Bonnefoux, with the Charlotte Symphony Orchestra playing the familiar Pete Tchaikovsky score, this year under the baton of Jacomo Rafael Bairos. Turnover was the biggest novelty at the opening Saturday matinee performance — new Clara, new Fritz, new Nephew/Nutcracker, new Snow Queen, and new Sugar Plum Fairy. Nearly half the 16-member troupe is new, so the dancer bios and the full-color headshots by Jeff Cravotta are welcome improvements in the program booklets.

Each of the two acts has its special strengths. Act 1 will always seem fresher for those of us who return every year, because there's so much more storytelling, because a new bevy of ballerinas perform as Clara's friends, because Mark Diamond keeps adding and subtracting new shtick from his comical turn as the eccentric Herr Drosselmeyer, and because of all the magical action — at the Christmas party, at the epic battle between the mice and the toy soldiers, and at the Land of Snow until Clara floats away.

This year's klatch of Clara chums struck me as the best ever, a testament to the ever-increasing strength of NCDT's dance school. Among the varsity newcomers, Gregory DeArmond's turn as the Toy Soldier impressed me most. But let's face it, a prime reason why Act 1 seems so perennially fresh is because so much of the music is divertimento dull. Bring on Act 2!

Here is where all the hit melodies are, with nifty solos by clarinet, piccolo, and celesta that stick in our minds like the gooiest caramel — mated with the images of the prodigious feats performed by the elegant Sugar Plum Fairy and her leaping Cavalier, the spinning Candy Cane, and the sinuous Coffee duo. Storytelling halts in its tracks, but after two or three years, we remember every Tchaikovsky melody, every Bonnefoux dance step, and every Bjorn Winnblad costume. Among the newcomers, Emily Ramirez was the standout as Tea, leading the Ribbon Dancers, yet it's impossible not to extol the veterans, Anna Gerberich and Addul Manzano in the grand Sugar Plum pas de deux, Melissa Anduiza and Pete Walker for their erotic Coffee, and Jordan Leeper as the human peppermint stick.

UPSTAIRS AT THE BOOTH, Clara's Trip wasn't nearly as balanced in its two acts, although choreographer Caroline Calouche certainly modernized the familiar Nutcracker scenario. With so little of Calouche's trademark aerial work and so little of the technical polish and inventiveness that was evident in The Macabre Masque, the company's debut production at the Booth back in October, the Calouche Christmas party paled in comparison with the NCDT version I'd seen earlier in the day. It started out like a Nutcracker that auctioned off all its live music, scenery, costumes, sparkling theatricality, dazzling choreography, and sheer dancing bravura — getting only some fitfully funny slapstick in return. 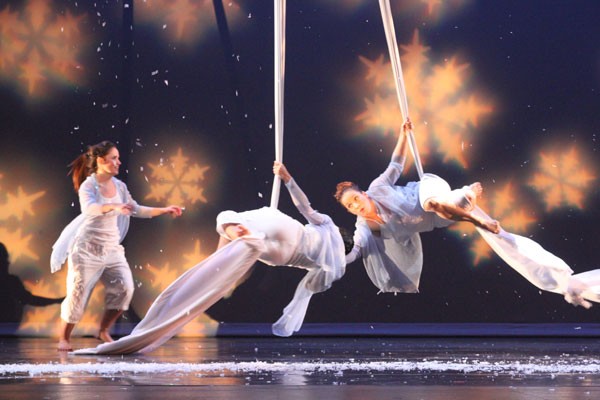 Frankly, I was a little surprised that nearly everyone in the audience returned after intermission. But the dreamland that was Clara's destination was strewn with a variety of aerial apparatuses, and Calouche was now playing to her strength in the succession of choreographies she set to the Tchaikovsky chestnuts. While it seemed regrettable until now that Calouche hadn't traded out some of the original ballet score — like for the Ellington big band version? — it was actually rather surprising how well the aerial routines worked with the familiar melodies in their customary dress.

Aside from Calouche herself, frequently partnered by Troy Haywood up yonder on the silks, Alexis Browning and Sarah Johns were the most compelling performers on the suspended rings. The Candy Canes' piece performed by Alysha Perrin and Sarah Ragon was acrobatic rather than aerial, but it was the best earthbound work of the evening and the best comedy.