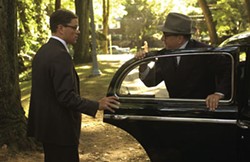 HAPPY FEET For at least half of its running time, Happy Feet is the usual crapola animated feature, this one about a penguin (voiced by Elijah Wood) whose tap-dancing prowess freaks out his fellow flightless fowl. Like many mediocre toon flicks, it features saccharine characters, soulless CGI imagery, lazy stereotypes that border on racism, and way too much Robin Williams (playing not one, not two, but three characters). But a strange and wonderful thing happens deep into the film. It dispenses with the fun and games and becomes a sober reflection on the harm that humans are causing to the environment and to our ice-capped friends in particular. The movie morphs into one of the coolest Twilight Zone episodes never made, and for a brief, glorious second, I thought it was going to end at the most opportune moment, delivering its themes with all the force of a sledgehammer on an egg shell. But no. The film recovers from its momentary brilliance and soon is back on its preordained path to a happy ending -- albeit one that still keeps its relevant message intact. The end result is decent fare, but it passed on the opportunity to be so much more. **1/2

THE HISTORY BOYS The acclaimed play won a half-dozen Tony Awards earlier this year, but don't expect similar accolades for this hit-and-miss screen adaptation. Everyone involved in the theater production -- director Nicholas Hytner, writer Alan Bennett and all the principal performers -- is present and accounted for in this celluloid rendition, a development which actually becomes a vice when it's obvious the film will never completely transcend its stage roots. The literate story centers on the relationships between eight smart lads attending a posh school in England during the early 1980s and the three teachers who mold their minds in different ways: the inspirational Hector (Richard Griffiths), whose habit of casually laying his hands on the boys might soon get him into trouble; new professor Irwin (Stephen Campbell Moore), whose radical approach to education piques the interest of some of the students; and the no-nonsense Mrs. Lintott (Frances de la Tour), a caring teacher who's least likely to mince words. Griffiths, Moore and de la Tour are all excellent, and their characters prove to be far more interesting than the young charges whose dilemmas fill up the majority of the screen time. The dialogue in Bennett's script is more riveting than the situational developments, but Hytner's obvious attempts to open up this visually immobile piece yields only mixed results. **1/2

THE HOLIDAY The best bet for spreading cheer across multiplexes this holiday season, The Holiday is a finely polished piece of romantic cinema, with a generosity of spirit so all-encompassing that it's easy to forgive its occasional excesses. Amanda (Cameron Diaz) and Iris (Kate Winslet) are both unlucky in love and seeking to get away from the heartbreak of their daily lives. Therefore, after hooking up through a "home exchange" Web site, Amanda heads to Iris' quaint English cottage while Iris ends up at Amanda's luxurious Hollywood mansion. Initially, men are the farthest commodities from both women's minds, but Amanda soon gets intimate with Iris' brother (Jude Law) while Iris becomes acquainted with a film composer (Jack Black). Writer-director Nancy Meyers clearly writes from a privileged perch: Her characters tend to be perversely rich, impeccably groomed and fabulously good-looking. Yet because she has the ability to imbue these high-and-mighty figures with flaws and doubts and in the process make them recognizably human, it's always easy to warm up to her players. The Holiday is overlong by at least 15 minutes, but the appealing cast makes it easy to lose track of time. ***

NIGHT AT THE MUSEUM This family film plays with fire by employing the services of three overexposed actors -- Ben Stiller, Owen Wilson and Robin Williams (only Will Ferrell is missing) -- and potentially allowing them to run rampant through an overstuffed fantasy yarn. Mercifully, though, Stiller is muted, Williams is similarly restrained, and Wilson ... well, Wilson is still pretty annoying (two out of three ain't bad). Stiller plays Larry Daley, the new night watchman at a museum where the exhibits come to life after the venue closes for the day. The benevolent Teddy Roosevelt (Williams) is helpful to have around, but Larry has his hands full evading Attila the Hun, dealing with a mischievous monkey, and settling squabbles between a miniature cowboy (Wilson) and an equally diminutive Roman commander (Steve Coogan). A clever premise (adapted from a children's book) is hampered by lackluster scripting and directing, though Ricky Gervais provides some choice comic moments as the supercilious museum head. If nothing else, this should command the attention of kids who are already bored with their Christmas presents. **