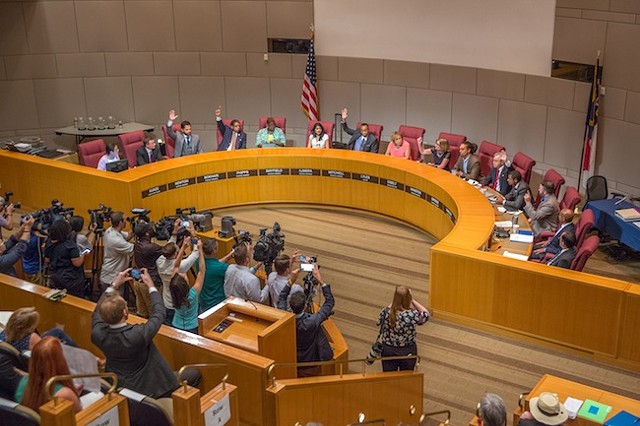 As Ray McKinnon walked out of Monday's specially called Charlotte City Council meeting on Monday, July 16, he was disappointed but not surprised that council members voted 6-5 to officially invite the Republican National Convention to Charlotte in 2020.

McKinnon, co-founder of the local political organization New South Progressives, had led the movement calling for #NoRNCinCLT over the past month. In that time, he and others had helped convince four city council members to join District 2 representative LaWana Mayfield in her opposition to the convention coming to Charlotte. But in the end, his efforts were not enough.

Despite "Nay" votes from Mayfield, Justin Harlowe, Braxton Winston, Dimple Ajmera and Matt Newton, the six remaining council members sided with Mayor Vi Lyles in deciding to order city manager Marcus Jones to negotiate contracts with the RNC and local host committee. Although Lyles did not have a vote on Monday, she has been public in her support for bringing the RNC to Charlotte.

The RNC site selection committee is expected to award Charlotte the RNC during a vote in Austin, Texas, later this week.

McKinnon was the first speaker of more than 100 who addressed the council during a public forum that lasted about two hours hours on Monday afternoon. The speakers were nearly split between being opposed to the RNC and supporting the decision to host it here in Charlotte, with a slight majority speaking in support. 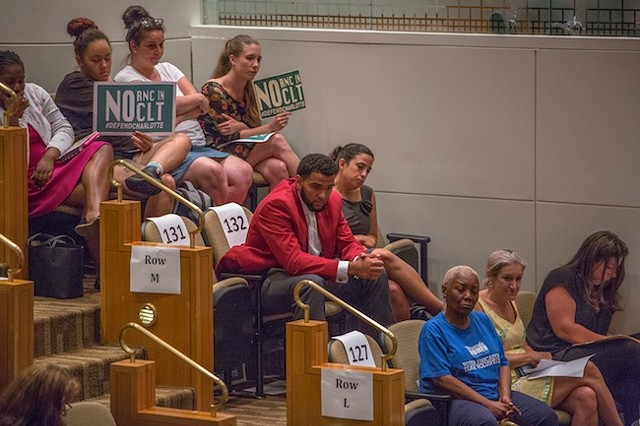 After the meeting, McKinnon said he was taken aback by the refusal of some city council members to stand with their base.

"It is ironic to me that this council chamber is filled with Republicans cheering on our Democratic mayor and our Democratic council members, and they'll remember that next year when they're not going to be the ones that they have to convince to vote," McKinnon said. "It's going to be those of us who worked hard for them, we worked our butts off for this council, to get this? For them to appease?"

Council member Larken Egleston, who represents District 1, was the only vote McKinnon said he was unsure of going into the meeting.

When it came Egleston's time to speak on Monday, he mentioned that he had heard from over 300 constituents from his district wanting to share their opinions for or against the RNC. He warned against stereotyping Republicans based on the Trump administration.

"To paint with broad strokes and insinuate all Republicans share the moral shortcomings of the current president is reckless and doing so prohibits us from any claim to the moral high ground," Egleston said. "The polarization of our current political climate is toxic. It's caused many to retreat to their respective ideological corners. Many will say it's naïve to believe we can mend fences and forge partnerships across the aisle at such a divisive moment in our country, but I would far prefer to pursue that goal than resign myself to the idea that those with whom I disagree are inherently evil and incapable of compromise."

Ajmera pointed out that, of the $50 million awarded by Congress to cities that host conventions, Charlotte spent $49.5 million during the DNC in 2012. She fears that heightened security and inflation would put the city over that amount in 2020.

If that were too happen, Hagemann said, a $10 million backup would be funded by the RNC, although Newton later voiced his concern that he could not trust the RNC to have that money on hand if it were needed.

After the meeting, McKinnon said he was upset to hear Egleston's comments about inclusion being the reason he voted in support of the RNC.

"To have council member Egleston try to lecture us about divisiveness, and he hadn't said anything about Donald Trump, when is he going to say anything about Donald Trump?" McKinnon asked. "It's time for him to stop trying to appease [council member] Tariq Bokhari and the Republicans in Charlotte and start listening to his constituents. Some of the main leaders in this #NoRNC2020 are from his district. He should have thought about that instead of trying to come for us."

Egleston did in fact address those exact concerns during his speech on Monday, stating that he knew his vote may be unpopular with a large group of his constituents.

"We must lead by example and make tough decisions which will often be unpopular," he said. "We are not elected to constantly protect the odds of our own reelection, but to do what's best for Charlotte, even when those decisions come at a personal cost."

On social media, reaction was mixed. Nikki Wolfe, community and marketing director with Yelp Charlotte, took to Twitter to show support for Egleston, citing his connections with the service industry, which stands to benefit from an event like the RNC.

"I support Larken 100% and am damn proud to see him stand up for this," Wolfe wrote. "He's worked in service industry for at least 15 years, he knows the impact events of this magnitude have on local businesses. He talks to these business owners every single day."

Many of the speakers who showed up on Monday to support the RNC coming to Charlotte were members of the service and hospitality industry, from hotel managers to Uber drivers.

Many in opposition cited Trump's despicable policies and expressed fear for what types protests the convention would spur. Multiple people referenced the white supremacist march on Charlottesville, at which a counterprotester was killed on August 12, 2017, speculating that the convention could bring much higher rates of violence.

Local activist Luis Rodriguez recalled the story of a childhood friend named Mikey who had lice and therefore was not allowed to come to the Rodriguez house to play. He used the story as a metaphor for the GOP.

"Mikey wasn't a bad kid but he had a condition that made him coming over out of the question, not unless we wanted lice of our own to deal with," Rodriguez said. "Right now, the GOP is full of fine people, I am sure, but the GOP has a bad case of lice; KKK lice, neo-Nazi lice. It's undeniable. You can see them with the naked eye. And just as sure as my mother knew then, we know now, you can't let people come into your house with lice and not expect to get lice yourself."

During the debate following the public forum, District 5 representative Matt Newton voiced concerns stemming from the atmosphere of today's political climate, as well as the fresh wounds of the Charlotte Uprising, which occurred in Charlotte in 2016.

"I know that the vitriolic rhetoric I've heard, it's on both sides. And I know that that's not us, but at the same time I believe it's because this event represents something different and I don't know if it's fair for us to expect that to change over the next two years. It could quite frankly get worse," Newton said.

"I would also be remiss if I didn't entertain the thought that we as a city still need to heal from the events of September 2016, and we may be opening up old wounds instead of allowing those wounds to heal," he continued.

While multiple members praised the more than 100 speakers who addressed the council for keeping things civil throughout the debate, outside during the meeting, tensions flared as Trump supporters waving flags outside of the Charlotte-Mecklenburg Government Center argued with Charlotte Uprising protesters marching in protest of recent deaths in the Mecklenburg County Jail.

As McKinnon walked out of the meeting, a man in a white t-shirt and red Make America Great Again hat could be heard screaming loudly at a young black man about how he was proud of his white heritage. A police officer had to step between the two men as things became more heated.

In that moment, McKinnon seemed to grow all the more despondent over the results of the council vote.

"Welp," he said, shaking his head. "It's already started."