Going down in a blaze of glory

We've had one professional theatre company in Charlotte that drew the likes of Hilary Swank, Tony Kushner, Beth Henley, Andre De Shields, Emily Skinner and Bonnie Franklin to town. Another company was so prolific that they often had two productions running at the same time in their final days. Scores of fringe companies, held up by dogged determination and duct tape, have sprouted up, wrought miracles on shoestring budgets, and disappeared overnight. 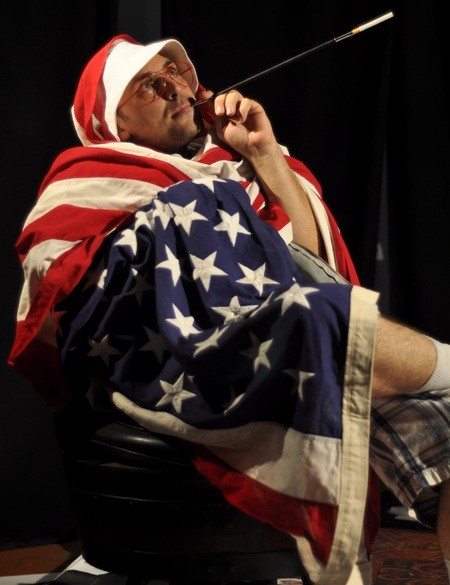 So did the pro company, Charlotte Repertory, and the prolific company, Carolina Actors Studio Theatre — both trashed by rogue boards of directors.

But we've never had anything like James Cartee and his Citizens of the Universe. Never bedeviled by meddlesome bean counters, Cartee is closing down his company and leaving Charlotte — with his own special flair. One of his final shows, O'Brother, is up and running at NoDa Brewery as we go to press. Another, Gonzo: A Brutal Chrysalis, opens next week. Four more Citizens productions are in the works before COTU brings down the curtain on its final show on December 10.

The company's name came from "Sure Thing," the first short play in David Ives' All in the Timing, which was the first show COTU co-produced in 2001, over in Greenville, SC. A comic sketch with a multitude of false starts, "Sure Thing" was an apt reference, since COTU popped up afterwards in multiple places, including Orlando and Yellowstone, before taking root here.

Their first Charlotte effort, Trainspotting at the Milestone Club (a frosty success in late January of 2008), was emblematic of what made COTU unique. From the beginning, Cartee's shows voyaged to places nobody else had considered before: Fight Club in a Central Avenue parking lot, Reservoir Dogs at Studio 1212, Princess Bride at the Breakfast Club, Gonzo: A Brutal Chrysalis at The Graduate, Rosencrantz and Guildenstern Are Dead at the Chop Shop, Titus Andronicus in the back patio of Snug Harbor, A Disturbance in Whitechapel along multiple streets and venues in NoDa, The Lion in Winter at SEEDS, Nosferatu in the backlot of Salvaged Beauty, and Sid and Nancy at The Mill (before it became UpStage). 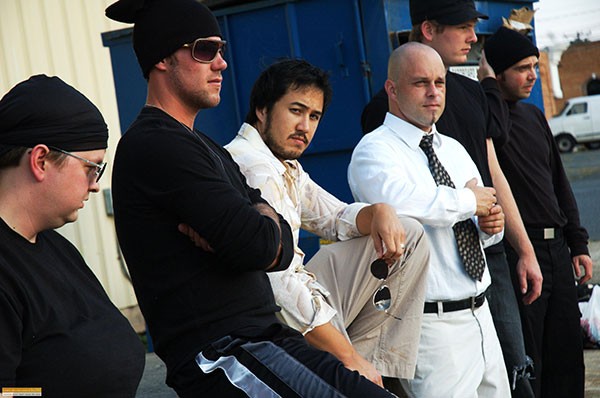 Cartee considers his company fringe theatre, but his roaming, pioneering spirit as he invaded new territories established COTU as Charlotte's quintessential guerrilla group. The trailblazing has left lasting marks. Some of these previously unexplored places, most notably UpStage, caught on as performance venues with other companies.

Just as important are Cartee's colonizing instincts. The third — and likely last — Carolina Arts & Theatre Awards will be staged at Snug Harbor in September, gathering the community's theatre artists together and celebrating their achievements. More fundamental was the Queen City Fringe Festival of 2013. Cartee's attempt to set NoDa, Plaza-Midwood and Elizabeth ablaze with live performances didn't exactly ignite those neighborhoods, but it demonstrated that it could be done — paving a way for other groups and artsy shenanigans, like this year's successful BOOM Festival.

Yet the idea of taking favorites and cult movies and turning them into live theatre — never adorning them with song and dance — remains Cartee's exclusive turf. That mission actually evolved from an epic 10-year quest to find the playscript for Trainspotting that Cartee heard about back in his college days. He tracked down a rare book of four plays by Harry Gibson in New Zealand, paid a pretty penny for it, and found it more fabulous than he'd expected.

But it was audience reaction that convinced Cartee that he was on to something. People weren't coming to see Trainspotting out of curiosity for a new group in town, so much as they were connecting with the movie title.

"There is a hungry audience who love live performance," says Cartee, "but they want stories they are familiar with. My thought was, if I can get people who have never been to see a theatrical show — or haven't in years — I could trick them into seeing something they know. Hook 'em! Then pull an Uncle Vanya on them."

After Reservoir Dogs, COTU actually did produce Uncle Vanya at Story Slam in 2010. That was four months before reviving Trainspotting at the same Central Avenue venue. 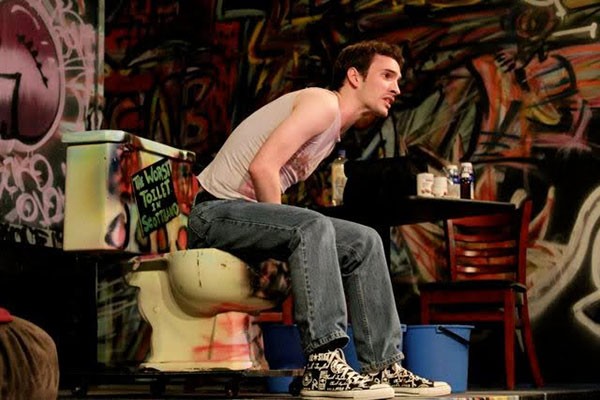 "Trainspotting at Story Slam is perhaps the closest that I came to the vision I had in my head to make it to the stage," Cartee reminisces. "Lion in Winter was a fantastic show and for me personally, I believe that is my best work. As far as overall idea? Big Lebowski, Princess Bride, and Eternal Sunshine of the Spotless Mind. I play up the comedy 'cause I'm a hack, but even then, what I was hearing from a lot of our audiences was that what was on the page leaped out into life and grabbed you by the balls. Much more so than any song and dance or even on the screen."

A sharp edge is often evident in Cartee's hacking, for there's another rich vein that runs COTU's history, whether it's favorite movies plopped onstage or classic literature. With titles that include Titus, Reservoir Dogs, Beowulf, and The Disturbance in Whitechapel — chronicling the rampage of Jack the Ripper — COTU's catalogue is easily the bloodiest in the annals of Charlotte theatre. The one time that he detoured into a musical, Cartee's COTU presented The Rocky Horror Show.

But musicals are not his thing. "All I know is that I don't want Mr. Blonde in Reservoir Dogs to do a whole musical number about cutting off a fucking ear. Fuck that. Cut the ear off and let the blood drip." 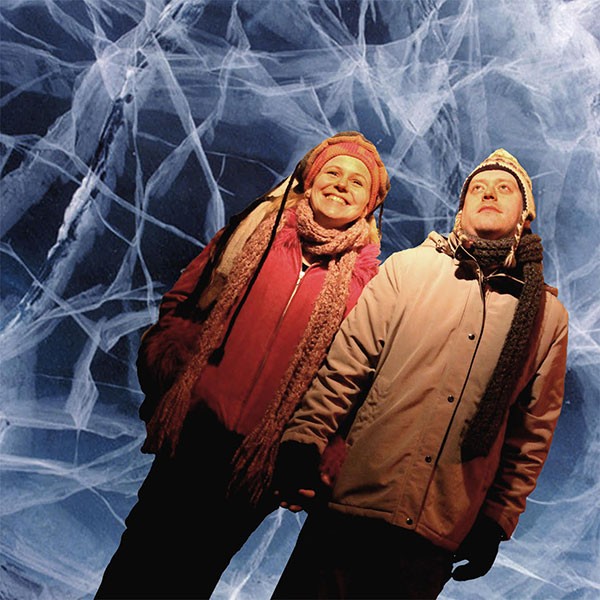 There's plenty more gore to come. The newest installment of Disturbance, Fear the Ripper, will transplant Jack's final rampage to Plaza-Midwood — with five new endings — and at the Halloween end of October, Silence will reign. That one comes with the chained convict Hannibal Lecter.

Is there anything left undone? Probably not, since the man who labels himself the Intergalactic Peacekeeper of COTU is letting his imagination fly into outer space in two of his valedictories. After Gonzo: A Brutal Chrysalis, Cartee and COTU will present The Rapture Sampler Platter, a variety of new, short plays based on the word and theme rapture, Sept. 8-10.

The theatre troupe will revisit its final frontier in The Hitchhiker's Guide to the Galaxy, December 1-10. And it should be a blast.

The Rapture Sampler Platter, Sept. 8-10 @ Pure Pizza Variety of new, short plays based on the word and/theme Rapture. “I choose to do another Sampler Platter ‘cause I feel that new work is always a must. We need to be churning out work like crazy to exercise our minds... and I choose to do it on a short timeline so that we can maximize actor talent pools. I want to give anyone who has never directed a chance to see what that's like. So this project is all about bringing new minds together with new work, giving them a deadline and seeing what pops out.”

Disturbance In Whitechapel: Fear the Ripper, Sept. 28-Oct. 3 @ Plaza-Midwood In a city with what seems to have a convention of killers, who is the real Ripper? Why has he returned? And can Abberline finally put an end to this menace? This time we invade the streets of Plaza-Midwood to seek out the fiend. “Disturbance is always a blast. Last year I added a separate storyline which split the audience up at times. Of course five new endings. There was no way I was going to leave without carrying out another slaughter.”

Silence, Oct. 27-30, Nov. 4-6 @ The Roxbury Clarice has her job cut out for her – and maybe literally. She has to match wits with the notorious Hannibal Lecter while she seeks to prevent another murderer from striking again. “Which brings me to the Halloween show. What better than a thriller with a cannibal? Blood.... lots of blood.”

The Hitchhiker's Guide to the Galaxy, Dec. 1-4, 7-10 @ Unknown Brewery Possibly the last surviving human, Arthur Dent, is rescued by Ford Prefect by hitchhiking onto a passing spacecraft. Then they set of on a series of misadventures wi th Trillian, a depressed android and the President of the Galaxy. some think this was general a good idea on their part. “The biggest show I could think of that's been on my plate is Hitchhiker's Guide. Love those books, TV show, radio show... and I wanted to see a live show. I mean when they did this in Liverpool, it had a hovercraft! I won’t be doing that... but I will be bringing the universe to you.”

For a full transcript of the exit interview with Cartee, go to artonmysleeve.net.