Film Issue 2012: The horror! The horror! of Mad Monster Party | Features | Creative Loafing Charlotte
Switch to the mobile version of this page.

Charlotte prepares for a monstrous, and welcome, invasion 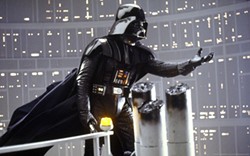 "The zombies were having fun; the party had just begun. The guests included Wolf Man, Dracula and his son."

Even acknowledging the further participation of Igor and The Crypt-Kicker Five in Pickett's 1962 novelty hit, that roster pales when contrasted with the comparably more eclectic line-up that will come to the Queen City convention, set to run March 23-25 at the Blake Hotel. Among the participants will be the Creature from the Black Lagoon, Chucky, Jason Voorhees, E.T.'s earth mom (you know, for the kids!), Frankenhooker (decidedly not for the kids), Roy Batty, and that omniscient intergalactic evildoer, Darth Vader. Clearly, the Force is strong with this gathering.

That's hardly a surprise when one looks at the other forces behind this event, creators and promoters Eben McGarr and Joe Moe. McGarr is a writer-director-producer (House of the Wolf Man, Sick Girl) while Moe's many talents include filmmaking, writing and singing (his website also reveals that he "once operated the front half of beloved Muppet, Snuffleupagus"). Yet it was their joint publishing project from a year ago that led them to create Mad Monster Party.

"Mad Monster magazine was Eben's brainchild," explains Moe about the publication they launched in March 2011. "It was a throwback to the golden age of fun monster mags that you really dig into and play with. Lots of puzzles and cutouts; a Lon Chaney puppet. You could build a paper Psycho house! At a time when everybody in publishing is getting away from paper, we created a mag that needs to be held in your hands. Well, it worked! Readers responded to Mad Monster magazine so positively, it seemed a natural to take it into the realm of a show."

McGarr agrees. "We had a clear vision of what the show would be," he says. "It had to represent classic and contemporary horror and be fun for all ages. The Roadkill Goreage exhibit at the show, featuring the actual screen-used Christine, the Duel truck and the Green Goblin Head from Maximum Overdrive, and the Crypt Critter exhibits are recurring featured articles from our magazine. As challenging as it was, it helped to know what kind of party we wanted to throw."

Fortunately for attendees, the kind of party the two are throwing is one that justifies its three-day stay, with all manner of entertainment packed into the schedule.

"It's not just a celebrity meet and greet, with some vendors selling their goods," McGarr says. "Many shows you attend, you get your autographs, do a pass at the dealer room, and you're done. We've focused on programming and events just as much as our first-rate guest list, and there will always be something to do."

"We have nothing but respect for other cons that operate more traditional shows," Moe clarifies. "In fact, Eben and I cut our teeth on those shows. Our friends put them on; we gleefully attend them. Sure, we'll have the expected panels, celebrities and vendors. But as filmmakers ourselves, we have a relentless itch to try to innovate and create theatricality."

To that end, McGarr and Moe are offering several unusual takes on old standards. Instead of karaoke, look for Scaraoke; rather than a Miss Carolina contest, there will be a Miss Horrorlina bikini pageant. And why stroll through a haunted house — in this case, The Haunted Mill in Belmont — by yourself when you can purchase an R.I.P. pass and not only walk alongside celebrity guests but also witness a celebrity handprint Scaramony at the venue?

These are admittedly variations on established attractions, but other events are distinctly unique. For instance, how many other fests can boast of allowing select patrons to square off against Lo Pan, the villain at the center of John Carpenter's 1986 cult offering Big Trouble in Little China?

"We try to deliver an immersive experience for attendees," enthuses McGarr. "They'll have once-in-a-lifetime opportunities — like a chance to appear live on stage with James Hong, who will be in full Lo Pan makeup and costume during the Hong Horror Show. They'll get to act out scenes from Big Trouble in Little China with the actual Lo Pan! One lucky bidder at our charity auction will have a personalized outgoing phone greeting recorded by Brad Dourif, while another bidder will have a phone greeting by Rutger Hauer! Can you imagine the actual voice of Chucky or Roy Batty greeting your friends when they call you?"

For all of the offbeat options, though, many attendees will still hone in on the bread-and-butter of conventions: the films and the celebrities.

For the movies, Moe and McGarr elected to go local by hiring Jamie McRoberts as director of the film festival portion of the event. McRoberts, co-owner of Charlotte's Mutantville Productions, was psyched to land the gig.

"When I first heard the news that Mad Monster Party was coming to Charlotte, I contacted the promoters and inquired as to whether or not they were going to include a film festival in their convention," relates McRoberts. "The next thing you know, we're hosting this festival. Even though we're filmmakers, in retrospect it makes sense that we would host the event. Our website, Mutantville.com, has always been a resource for filmmakers in addition to serving as a promotional tool for the horror genre at large."

McRoberts and his team will screen about 40 films during the festival, with the viewings taking place in two designated rooms at the Blake Hotel. "We didn't want to inconvenience anyone who travels from out of town and might have difficulty traveling to another venue for the movies," he explains. "The movies will be shown on 8-foot screens accompanied by an excellent sound system. Sound is of the utmost importance at festival screenings as it can make or break a film. We're also giving the filmmakers time to introduce their movies and talk to the audience."

While the Director's Cut of Clive Barker's 1990 cult item Nightbreed will be, in McRoberts' opinion, "the major draw of the convention," he's quick to mention more than a dozen other works, among them Sybling Rivalry, written and directed by 12-year-old Tara Nicole Azarian (My Name Is Anna), McGarr's documentary The Con, and the premiere of Mutantville Productions' Tales from Mutantville anthology series.

In addition to the films, there will be about four dozen celebrities on hand at the convention, meeting fans and signing autographs. (Note to the inexperienced: The celebrities charge per autograph, with the general range being $20-$30.) While space prevents us from listing all of the name attendees, it's an impressive roster, and all will have favorites.

Personally, I was most pleased to see the inclusion of Ricou Browning, who played the Gill Man in the three Creature from the Black Lagoon features from the 1950s; Dee Wallace, so terrific in such '80s fantasy flicks as E.T. The Extra-Terrestrial, The Howling and Cujo; and David Prowse, not only because he was Darth Vader in the original Star Wars trilogy but because of his presence in Vampire Circus, Frankenstein and the Monster from Hell and other works from Hammer Film Productions, the British outfit once responsible for a sizable roster of atmospheric horror yarns.

"Brad Dourif immediately pops to mind, from The Lord of the Rings, Child's Play, Rob Zombie's Halloween, and the list goes on," says McRoberts. "And I can't wait to see Rutger Hauer, from Blade Runner and Ladyhawke. There's also Mary Woronov, who worked with Andy Warhol and Roger Corman. Craig Sheffer and Anne Bobby are making their first convention appearances for the exclusive screening of Nightbreed.

"I'm an old-school WWF fan," he adds, "so Roddy Piper is a big draw to me — not to mention that he was in one of my all-time favorite horror/sci-fi movies, They Live. There are so many interesting guests that it's impossible to narrow it down."

"Overall, the actors at our show are all friends," explains Moe. "They work together in film and see each other at conventions all over the country. It's a family affair. The thing most genre celebs have in common is a special appreciation for fandom. Whether you're big or small, it's a hard business, so when you find a niche and make a home in it, it's gratifying. There are more independent horror movies made than any other fare nowadays. That's called job security, and actors are grateful for it and rightly attribute it to their fans."

The big question, then, is whether enough of these fans will attend Mad Monster Party to make it a successful venture, as well as a feather in the cap of Charlotte.

"We didn't just pick Charlotte out of a hat," states McGarr. "It's a great city with a ton of monster fans, and there's nothing like Mad Monster Party in the Carolinas."

Moe agrees. "We did our best to choose a city hungry for a genre presence and that had the right demographic to support a show like ours. Centrally located to fans who would make the trip. Lots of college students. Friendly community."

The success of Mad Monster Party should create waves not only in Charlotte but throughout the Carolinas. "This convention is going to bring thousands of tourists from across the country to the Queen City, and that's always good for the local economy," McRoberts says. "In the long run, the film festival helps by increasing the awareness of the films made by filmmakers in the Carolinas. All too often, out-of-state productions come to North Carolina to take advantage of our subsidies but they seldom hire local talent and crew. When we as filmmakers start showing the film community at large that North Carolina and South Carolina can make great films with very little resources, then some production company somewhere will trust one of us to shoot a big-budget film here."

If McGarr and Moe have their way, they'll partake in the area's distinctive eccentricities. "The city. The people. The landscape," Moe exclaims.

(Mad Monster Party will be held March 23-25 at the Blake Hotel, 555 S. McDowell St. For complete details, including prices, scheduled events and a celebrity guest list, go to www.themadmonsterparty.com.)