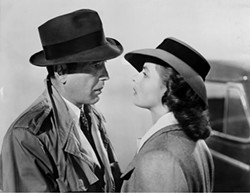 Rick and Ilsa. Laszlo and the letters of transit. Captain Renault and his charming corruptibility. "As Time Goes By." "Here's looking at you, kid." You know the routine. So round up the usual accolades for 1942's Casablanca, which celebrates its 70th anniversary in style.

Generally cited along with Citizen Kane, Gone with the Wind and The Godfather as one of the greatest Hollywood films ever made, this winner of three Academy Awards — Best Picture, Director (Michael Curtiz) and Screenplay (Julius J. Epstein, Philip G. Epstein and Howard Koch, adapting the unpublished play Everybody Comes to Rick's) — needs no plot synopsis, no cast breakdown, no further championing. True film enthusiasts know all about it; those who don't care a whit are merely film pretenders.

Movie lovers interested in seeing this timeless classic, whether for the first time or the 51st time, can explore one or both of two options.

First, Regal Stonecrest will offer an opportunity to catch it on the big screen with its scheduling of Turner Classic Movies Presents Casablanca 70th Anniversary Event at 2 p.m. and 7 p.m. Wednesday, March 21. The digital presentation of the picture will include an on-screen introduction by TCM host Robert Osborne as he discusses Casablanca's enduring popularity and shares some behind-the-scenes anecdotes. Admission is $12.50; tickets can be purchased at the box office or at www.fathomevents.com.

Then, six days after this theatrical event, Casablanca will be re-issued in a 70th Anniversary 3-Disc Blu-ray + DVD Combo Edition. This limited and numbered edition, featuring newly remastered versions of the film on both Blu-ray and DVD, will include a couple of new documentaries: Casablanca: An Unlikely Classic and Michael Curtiz: The Greatest Director You Never Heard Of. That's in addition to the three feature-length documentaries carried over from previous editions: 2008's You Must Remember This: The Warner Bros. Story, the same year's The Brothers Warner, and 1993's Jack L. Warner: The Last Mogul. Also carried over are a pair of audio commentaries — one by Roger Ebert, the other by film historian Rudy Behlmer — as well as tons of extras (the box copy promises over 13 hours of bonus material): an introduction by Lauren Bacall; deleted scenes and outtakes; the premiere episode of the shortlived 1955 Casablanca TV series (a yawner, though it's enjoyable to watch the General Electric commercial plugging the wonders of the electric iron); the cartoon Carrotblanca, starring Bugs Bunny (as Rick), Daffy Duck (as Sam) and an all-star Looney Tunes cast; and more.

In addition to the discs, the oversized box includes a 60-page book containing photos and archival materials, a reproduction of a rather misleading French theatrical poster which makes it looks as if Sydney Greenstreet's Signor Ferrari is the protagonist (to paraphrase Humphrey Bogart's Rick Blaine, of all the movie posters, in all the towns, in all the world, they pick this one), and, coolest of all, four drink coasters reading "Casablanca," "Rick's Café Americain," "Blue Parrot" and "La Belle Aurore."

This Ultimate Collector's Edition of Casablanca will hit streets on Tuesday, March 27. List price is $64.99, although many websites are already offering it for as low as $44.99.