Final Hobbit film, Into the Woods, Unbroken among new home entertainment titles | View from the Couch | Creative Loafing Charlotte
Switch to the mobile version of this page. 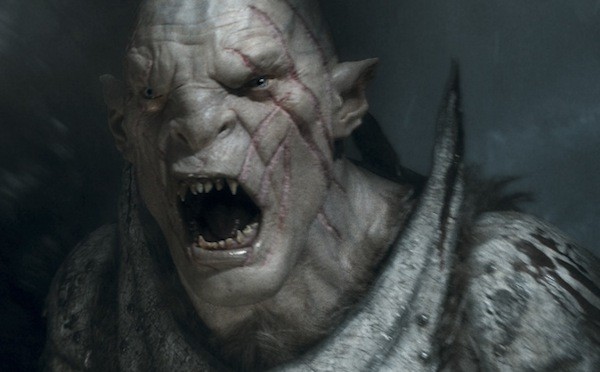 THE HOBBIT: THE BATTLE OF THE FIVE ARMIES (2014). Peter Jackson's previous Hobbit yarns, An Unexpected Journey and The Desolation of Smaug, were more than decent, but for all their CGI splendor, they lacked the epic ambition and oversized emotion of the filmmaker's Oscar-adorned The Lord of the Rings trilogy. So the surprise concerning this final flick is that, by a dwarf hair, it's the best of the trio, ending the saga in satisfactory fashion while investing the proceedings with genuine pathos along the way. The dragon Smaug (voiced by Benedict Cumberbatch) is — modest spoiler ahead — dispatched in about as much time as it took the final film in the Star Wars 2.0 trilogy to knock off Count Dooku, but there's still plenty of story left to tell, most of it centering around the efforts of everyone to bask in the reclaimed gold of the Lonely Mountain. Yes, it's The Treasure of the Sierra Madre with Thorin Oakenshield (Richard Armitage) subbing for Fred C. Dobbs, but there's real empathy to be felt in watching Bilbo (Martin Freeman) attempt to bring his friend Thorin back from the dark side. There's also a lot of heart in the budding romance between dwarf Kili (Aidan Turner) and elf Tauriel (Evangeline Lilly), as well as rooting interest in Bard (Luke Evans) becoming the reluctant leader of the human contingent. And if there's a feeling of déjà vu whenever the action shifts to Gandalf (Ian McKellen) again puttering across the landscape or yakking with other wizards (perhaps a side effect of McKellen being one of the only two actors, along with the sparingly used Cate Blanchett as Galadriel, to appear in all six Middle-earth films), it's offset by the segments featuring the Orc Azog (Manu Bennett), one of the most imposing of all recent movie villains. So after a span of 14 years and six movies, Jackson's finally done with J.R.R. Tolkien. Unless, of course, he suddenly decides to bring The Silmarillion to the screen, in which case an intervention might be required.

Blu-ray extras include a featurette touching on the entire six-film Middle-Earth saga; a piece on the New Zealand location shooting; and the music video for "The Last Goodbye." 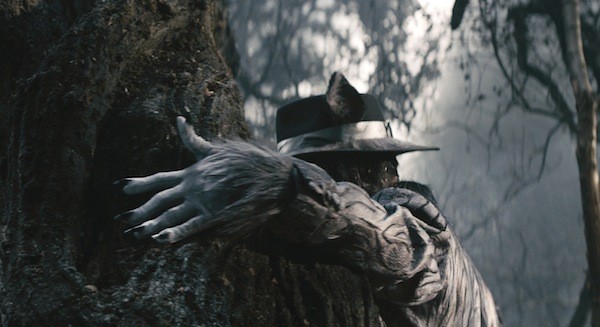 INTO THE WOODS (2014). It's telling that the first two actors director Rob Marshall cast in this screen version of the stage smash were Meryl Streep as the Witch and Johnny Depp as the Wolf. Subscribing to the Ridley Scott mantra that global superstars are more important to a film than finding the perfect performers for the right roles, Marshall bypassed the great Bernadette Peters (the Witch in the 1987 Broadway version, and only a year older than Streep) for an actress who at this point would get nominated by everyone for simply flossing (which explains the ass-kissing Oscar, SAG and Globe noms for a merely OK performance) and bypassed, well, every male in Hollywood for an actor who has devolved into a mugging caricature no longer capable of surprising or even engaging us. Move past the marquee names, however, and the other players adeptly take us through this revisionist take on age-old fairy tales. As the bumbling baker and his sensible wife, James Corden and Emily Blunt are affable protagonists, while Anna Kendrick again displays her professional singing chops (as she did in Pitch Perfect) as Cinderella. Daniel Huddlestone and Lilla Crawford, the kids cast as Jack (of beanstalk fame) and Red Riding Hood, hold their own against the older cast members, and Chris Pine, the most amusing person in the horrible Horrible Bosses 2, is even better as the vain prince smitten with Cinderella. The production looks handsome — the sets and costumes were justly Oscar-nominated — but Marshall's direction renders it all a bit stiff, with no real passion behind the proceedings, and the deficiencies in the original source material are present and actually amplified here (Wicked is far more clever in its revisionist take on classic fantasy tropes).

Blu-ray extras include audio commentary by Marshall and producer John DeLuca; a four-part making-of piece; a look at the cast; the deleted song "She'll Be Back," sung by Streep; and sing-along lyrics for all the musical numbers. 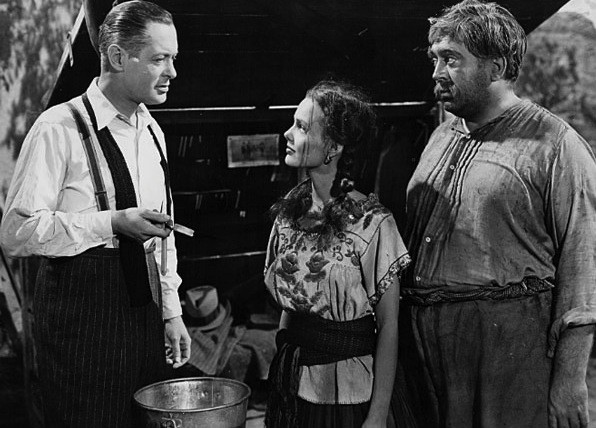 RIDE THE PINK HORSE (1947). Better known as an Oscar-nominated actor, the producer-host of the long-running '50s TV show Robert Montgomery Presents, the father of Bewitched star Elizabeth Montgomery, a decorated WWII veteran and a Commie-fearing Republican, Robert Montgomery also managed to direct a handful of movies over the course of his lifetime. In 1947, he pulled out two calling cards: He made his debut with the film noir offering Lady in the Lake — notable for being the first motion picture in which the camera completely adopted the POV of the protagonist, played by Montgomery himself and glimpsed only sporadically in mirrors throughout the picture — and then followed it with another noir, a long-buried gem unearthed here by the Criterion label. Montgomery stars as Lucky Gagin, arriving in a New Mexico border town with a poorly defined plan to blackmail Frank Hugo (Fred Clark), the crime kingpin responsible for his friend's murder. Lucky is clearly in over his head, a fact not lost on the chipper Bill Retz (Art Smith, co-star of the MST3K-meets-Lassie movie The Painted Hills), the FBI agent who's spent years trying to nail Hugo. Luckily for Lucky, he does find allies in a pair of locals: Pancho (Thomas Gomez), a garrulous carousel owner who enjoys getting drunk with his new American friend, and Pila (Wanda Hendrix), a reticent waif who initially follows Lucky around like a puppy dog but eventually proves herself to be invaluable. The plot isn't the attraction here; instead, it's the intriguing relationships between the characters, the black-and-white camerawork by the great Russell Metty (Orson Welles' Touch of Evil, an Oscar winner for Spartacus), and the scintillating performances by all concerned. Gomez earned a Best Supporting Actor Oscar nomination for his work, although Hendrix is just as noteworthy. 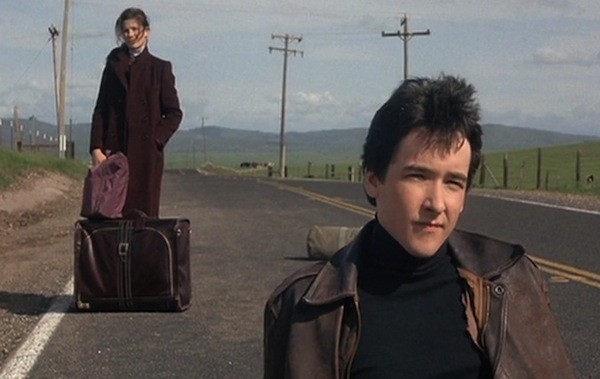 THE SURE THING (1985). In a decade largely defined by raunchy teen sex comedies, here's a film that stood out from the pack thanks to its sweetness and sincerity. Rob Reiner, still making the transition from actor to director (this was only his second such credit, following 1984's cult classic This Is Spinal Tap), unobtrusively guides this tale about Walter "Gib" Gibson (John Cusack), an East Coast college freshman who's never had much luck with girls. When his high school buddy Lance (Anthony Edwards), now attending a West Coast university, invites him to California with the promise of hooking up with a "no-strings-attached, no-questions-asked sure thing" (Desperate Housewives' Nicollette Sheridan in her film debut), Gib decides to accept the offer. Little does he realize that he will be making the trip with his reserved, possibly repressed, classmate Alison Bradbury (Daphne Zuniga), who's heading out west to visit her hopelessly square boyfriend (Boyd Gaines). Naturally, Gib and Alison find their icy antagonism melting over the course of their lengthy road trip, but what the script by Steven L. Bloom and Jonathan Roberts lacks in originality, it makes up for in good cheer and good vibrations. Look for Tim Robbins as a college kid named Gary Cooper ("But not the Gary Cooper who's dead"), and listen for the likes of Rod Stewart's "Infatuation," Huey Lewis and the News' "The Heart of Rock & Roll" and Wang Chung's "Dance Hall Days" on the soundtrack.

Blu-ray extras include audio commentary by Reiner; making-of featurettes; and the theatrical trailer. 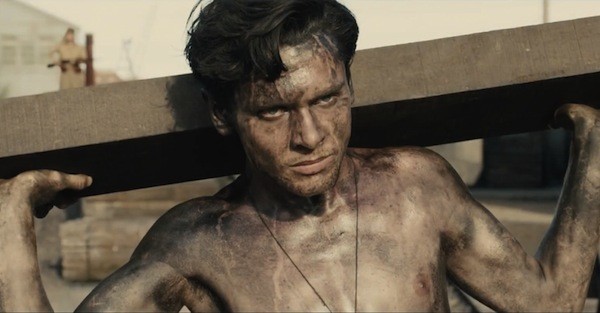 UNBROKEN (2014). Scott Rudin may inarguably be a great producer, but he's just as unequivocally a POS as a human being (for starters, he's notorious for firing over 120 assistants in a five-year stretch, including one who brought him the wrong type of muffin). But Hollywood insiders (and many outside) have known this for years, so it's unlikely anyone was shocked at the nasty comments the man behind No Country for Old Men, The Social Network and The Grand Budapest Hotel (among many, many more) made in some of the e-mails leaked in the Great Sony Hack of 2014. A sizable number focused on Angelina Jolie, tagged by Rudin as a "minimally talented spoiled brat." Of course, Jolie has just as many Oscars as Rudin (one apiece) and was the star of the $750 million global smash Maleficent, but that doesn't matter to an ogre like Rudin. So it's a safe bet he won't be purchasing a Blu-ray of Unbroken, the box office hit that marked Jolie's second directorial effort (following 2011's In the Land of Blood and Honey). Adapted by a powerhouse quartet of scripters (including Joel and Ethan Coen) from Laura Hillenbrand's book, this centers on the true-life tale of Louie Zamperini (Jack O'Connell), an Olympic athlete who, during World War II, survived for 47 days on a life raft, only to then end up in a POW camp overseen by a sadistic guard known as "The Bird" (played by Japanese rock star Miyavi). The story of Unbroken is a great one, and Jolie tackles it as if she were mounting an old-fashioned flag-waving piece sprinkled with modern trimmings (she doesn't shy away from the brutality on view). But the passion evident in her best performances is largely missing in her direction, as the austere workmanship keeps the incidents at an emotional distance and never provides the inspirational catharsis demanded by the material. Unbroken is a fine biopic of a remarkable American, but it needed a little more fire in its belly to truly roar.

Blu-ray extras include a behind-the-scenes featurette; deleted scenes; footage from a concert that Miyavi performed for the cast and crew; and a piece on the real Zamperini.

Tags: View from the Couch, film, review, View From The Couch, Blu-ray, DVD, Matt Brunson, The Hobbit: The Battle of the Five Armies, Into the Woods, Ride the Pink Horse, The Sure Thing, Unbroken