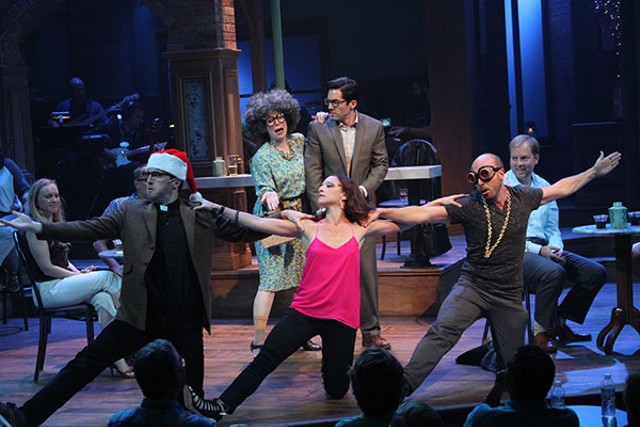 When it hit Broadway three years ago, First Date wasn't exactly a critical or box office triumph. Starring Zachary Levi (TV's Chuck) and Krysta Rodriguez (from Smash), the pocket-sized musical — six actors and 90 minutes — drew jaundiced eyes from the theater press. Though the critics generally liked what they saw from Levi and Rodriguez, they focused far less charitably on the script by Austin Winsberg and the score by Alan Zachary and Michael Weiner. The most positive reviews conceded that mediocrity was in sight for the sitcom script and the pop rock score, yet when a few of those jaundiced eyes deigned to look around and observe others in the house, they had to admit that the audience was having a rollicking time. After the notices came out, attendance began to tumble, never to recover until the announced closing week less than five months later.

To give First Date a second chance on the road, its creators needed to think makeover. In a new Blumenthal Performing Arts presentation, now at Booth Playhouse through Nov. 20, it's obvious that Charlotte's backers and new director/choreographer Dan Knechtges have sparked a lot of rethinking.

Aaron is still a buttoned-down, slightly nerdy, risk-averse guy who is in a steady job without any self-fulfillment on the horizon. Mutual friends have set him up with Casey, an artsy Bohemian who keeps good guys like Aaron at arm's length. Her weakness for bad boys has littered her past with a string of relationships that never worked out.

At the point where those bad boys come into play, Zachary and Weiner have gone to work on their songlist. Edgy British Guy and Edgy Rocker Guy are replaced by British Artist and Stoner Guy while their song, "Can't Help but Love Me," is similarly altered. Before that, we have a revamp of "Forever Online," a song that was cut from the Broadway production soon after the opening. Now a new character, Google Girl, joins Casey and Aaron for "The World Wide Web Is Forever," and this song — about Googling prospective dates before you meet them — may be the freshest, most delicious segment that First Date has to offer.

Transplanting the show from the 1100-seat Longacre Theatre in New York to the 434-seat Booth, Knechtges has implemented far more fundamental changes. Not only has he reduced the cast from six to five, he has brought members of the audience onstage, seating them around the bar and at tables at the restaurant where Aaron and Casey meet. These customers don't sit around idly during the action. 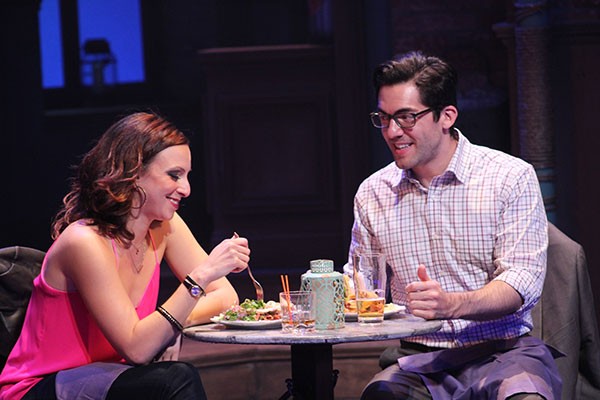 Critics reviewing this remake can't ignore the audience because they're part of it. The main responsibility for getting patrons involved falls to Paul Ianniello as our Bartender/Waiter. Though we've relocated from Manhattan to Uptown Charlotte, this Waiter fits the New York stereotype of waiters biding their time until that magical day when they nail an audition. He's super gregarious, marking Aaron as a dude on a blind date as soon as he enters, telling him to lose the tie and unbutton the shirt if he plans to reach first base.

He'll also chat up the diners and drinkers, prevail upon them to switch tables, move to the bar, or even kick up their heels. Or he might reappear on the roof of the building or re-enter the restaurant from the street. Most memorable among his thought-cloud characters, Ianniello dons a tallit and enters as Aaron's disapproving grandfather when he discovers that Casey is a shiksa.

Gretchen Wylder is Grandma Ida in this Jewish guignol number inspired by the Fruma-Sarah haunting from Fiddler on the Roof, getting the cheap laugh when she sings "I will break your matzo balls." Tapering off just a smidge on her madcap energy, she also pops up at odd moments from behind the bar as Aaron's former bipolar fiancée. Wielding a cocktail glass or a frying pan out in the box seats, Wylder is also Casey's older and wiser sister, Lauren, reminding the prodigal that her biological clock is ticking or — more to the point — busting her on her self-defeating defensiveness with good guys.

As you've already divined, Aaron and Casey's first date is littered with real and imagined interventions. In multiple incarnations, Kevin Zak as Man #2 completes the unholy trinity. Wearing a Luke Kuechly jersey and toting a "brewski," Zak is most often Aaron's best bud Gabe, telling the newbie to blind dating whether or not he's straying from the golden path to Fuck County. Or he might change costumes and resurface from behind the bar as Reggie, a dimwitted ex-boyfriend who gets enraged when Casey doesn't answer his repeated bailout calls to her cellphone.

At the eye of this cyclone of eccentricity, Matthew Schatz can be fairly nebbishy as Aaron without coming close to relinquishing his hold on comparative wholesomeness. Likewise, Katerina Papacostas doesn't need to softpeddle Casey's practical joking and hostility to sustain her desirability. Together, they rock "First Impressions" almost immediately after they meet, building up a pile of appeal they can squander.

Schatz's take on Aaron makes him somewhat less cartoonish than Brad in Rocky Horror, while Papacostas' Casey is slightly more wholesome than the most mainstream member of The Addams Family. Oh, wait a second: Rodriguez was Wednesday Addams, originating that role on Broadway before originating Casey. Pure coincidence, I'm sure.

Papacostas' foxiness drew extra play on press night when our Waiter asked a customer to move over to the bar so Casey and Aaron could be seated. The audience member shot back a counterproposal, suggesting that Casey be seated right there next to him!

In this more informal format, it becomes more obvious that the very idea of first dates is a powerful draw for audiences, stirring up old memories, tingling feelings of anticipation, and long-dormant hormones. Perhaps the best alteration Winsberg has made to his script is making sure that some of the comedy at every performance will be unscripted.

Proximity of last week's openings in Charlotte to the police shooting of Keith Lamont Scott — and its tumultuous aftermath — seemed to tamp down turnout at Booth Playhouse on Thursday. Crowds outside for Friday evening's Breakin' Convention pre-shows, the spoken word slammers outdoors on the Levine Center for the Arts Plaza and the b-boys working the cypher in the Knight Theater lobby, were about the same anemic size as last year, when bad weather curtailed attendance.

But when the sun shone so brightly and beautifully on Saturday afternoon, I could tell just by driving past the Spirit Square parking lot that Breakin' Convention's all-day Street Jam was bigger and better. Around the corner on 7th Street, another robust crowd of parents and kids were lapping up the Children's Theatre of Charlotte revival of A Year With Frog & Toad, which is every bit as delightful as the 2008 version at ImaginOn — and more completely polished.

Charlotte Symphony subscribers kept the good vibe going on Saturday night, thronging to the All Tchaikovsky concert at Belk Theater. Guest soloist Esther Yoo gave them more than ample artistry with her fire, precision, and honeyed tone in the Violin Concerto, drawing a standing ovation after the opening movement. Music director Christopher Warren-Green and the orchestra were vibrant and dynamic in their accompaniment, so I had no qualms about joining the cheers and the ovation when Yoo's performance reached its triumphant end.