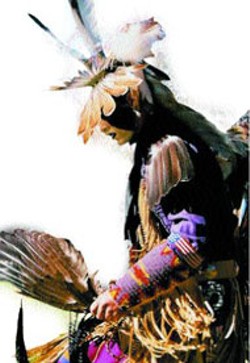 When the Pilgrims made their way to Plymouth Rock in 1620, the native residents of Massachusetts helped those Europeans settle into the land, taught them about the indigenous food, and participated with the Pilgrims in giving thanks to a higher deity for the bounty of well being. This type of hospitality was seen frequently by other European settlers in the Southeast.

One of the best accounts of the English explorers' first encounters with the inhabitants of the Carolinas is the journal of John Lawson, A New Voyage to Carolina Containing the Exact Description and Natural History of that Country written in 1700 (first printed in 1709 and now published by The University of North Carolina Press). Lawson traveled upriver from Charleston, SC, and went as far inland as meeting the chief of the Kadapahaws, or Catawbas (River People), near the junction of Sugar Creek and the Catawba River before continuing north on the native trading routes which took him through the center of downtown Charlotte.

Lawson wrote extensively of the foods he encountered. By the 1700s, peaches, which had been introduced by earlier Europeans, "grew as easily as weeds" in the Carolinas and were dried by the natives and eaten like a fruit roll-up, "barbacu'd," made into a cake or a quiddony (a thick syrup or jelly).

The Catawba, a people native to the Charlotte Metropolitan area, are part of the Siouan language group and were an agricultural people who cultivated potatoes, beans, squash and corn. They were, in fact, the original organic farmers in the area.

Some elements of the Catawba diet are still popular in the area. Persimmons, ramps, venison, and black-eyed peas, all part of the Catawba diet of 1700, are currently featured on trendy restaurant menus. Cornbread remains a common component of the Southern table.

In 1700, Lawson wrote that the meat in the native Carolinian diets primarily consisted of buffalo, elk, deer, bear, pole cat, wild cat, possum, raccoon, rabbit, and squirrels, all "roasted with their guts in" and bones carefully incinerated after the meal. Young wasps, before they could fly, were a delicacy. Fowl, including wild turkeys, fish, and turtles were other favorites.

The roster of Catawba ingredients included pumpkins; cucumbers; squash; beans and peas such as navy, black-eyed, pinto, and lima; string beans; corn meal; berries such as blackberries, huckleberries, and strawberries; wild potatoes; acorn and acorn oil. Ears of corn were roasted in the summer and dried for the winter. The native American persimmon was used in breads and other confections.

Sandra Reinhardt, a cultural anthropologist in the Catawba Cultural Center, says most of the Catawba's cooking took place in especially designed clay pots which were made to be placed by the edge of the fire and would keep the food cooking slowly, similar to a crock pot. Other pots were suspended over the fire. She noted that mealtime was not necessarily a group gathering. "People," she says, "could come by the fire and serve themselves whenever they were hungry."

Reinhardt notes the Catawbas ate locally found greens such as pigweed, also known as lamb quarters, and nettle. Hickory nuts, acorns, and dried corn were ground up for flour. She adds that, "acorns need to be soaked in cool water for a couple of hours to leech out the bitter tannin in them. After soaking, they can be ground up and used the same way as cornmeal." Dried nutmeats were added to stews as a thickener.

Ashcake, or bread, was served often. Reinhardt continues, "It was made with cornmeal and just enough water and lard to bind it. The mixture was shaped into small thin cakes that were covered with ashes in the fire to bake. They were brushed off lightly before serving." Other cornbread was cooked on hot stones placed near the campfire.

One of the more popular foods, Reinhardt explains, was the Jerusalem artichoke, or sunchoke. This native North American tuber grows from the roots of the perennial sunflower and was dug up in the fall, after the frost. Jerusalem artichokes could be eaten raw or cooked.

Recipes for authentic Catawba dishes are straightforward. The following is from the Catawba Text, translated by Frank Speck, Columbia University Press, in 1934: "Rules for Cooking Crawfish. Crawfish are sweet. Put in grease with a little salt and stir. When they are done they are red."

Native Americans were quick to incorporate the foods brought by the Europeans, such as peanuts, potatoes, and apples. Recipes from many of the nation's indigenous cultures can be found in Spirit of the Harvest, North American Indian Cooking by Beverly Cox and Martin Jacobs (Stewart, Tabori, & Chang, 254 pages, $40), a James Beard Foundation Book Award winner.

One of the food festivals Lawson observed in 1700 was the "Harvest of Corn" which returned "thanks to the good spirit for the fruits of the earth." The annual Yap Ye Iswa Festival, or "Day of the River People," will be held on Saturday, November 30, from 10am until 4pm. Demonstrations will be given by the Catawba master potters and beadwork makers. Flintnappers will demonstrate the ancient art of arrowhead making. Native American food, including roasted corn, and not-from-this-area fry bread and Indian tacos will be available for purchase. A free tasting of the traditional Catawba venison stew will be offered. Catawba crafts and pottery will be available for sale. Admission for this event is $1 and for children under 5, free. The Catawba Cultural Center is located in the Catawba Nation, eight miles east of Rock Hill, SC, at 1536 Tom Steven Road. Take I-77 South to Exit 79 (Dave Lyle Boulevard) and follow the signs to the Catawba Reservation and Cultural Center. For more information call: 803-328-2427.