Hail to the chiefs in Frost/Nixon 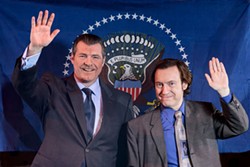 Ordinarily, we can tell you precisely how long a local theatrical production will keep you in your seat. But on the VIP opening night of Frost/Nixon at Carolina Actors Studio Theatre last Friday, my iPhone stopwatch proved to be an inadequate instrument. It was impossible to determine when exactly the CAST production was supposed to begin. No fewer than three cast members made silent entrances after lights-up when lift-off failed on an introductory newsreel. Scene changes throughout Act 1 were marked by a weird Star Trek tele-transporter lighting sequence that occasionally finished by shining the appropriate spotlight on an actor after he'd begun speaking.

Houselights came up for intermission, but they didn't stay up. A Cat Stevens sound cue and a blackout of the houselights tricked some audience members into returning to their seats, aided by an usher's flashlight. Then there was difficulty getting the houselights to come back on. So the 113 minutes clocked on my stopwatch — plus intermission — are a ballpark figure, a minute or two on the high side.

Order was nearly restored after intermission, when we watch key excerpts of the landmark interviews. There had to be residual effects, on actors as well as the audience, after a tech meltdown of this magnitude.

Luckily, our historic antagonists were nearly perfect in their insouciance. That's partly a tribute to the leads, Hank West and Lamar Wilson. It may also reflect how vividly playwright Peter Morgan has captured the complexity and intensity of both combatants. Actors need to concentrate really hard to render convincing portraits of these colliding public figures.

Richard M. Nixon had written his Six Crises long before he was elected the 37th President of the United States, before he covered up Watergate, and before he resigned from office, leaving the White House in disgrace. Say what you might about his presidential qualifications and achievements, not to mention the carte-blanche pardon he received for his misdeeds, Nixon was well-schooled in adversity when he agreed to his first post-presidential interview. He was, in fact, an adversity machine, sure to receive kingly fortunes from the next books he wrote about his epic tribulations. Every Nixon bungle could be turned into a bonanza — the lesson he bequeathed to our celebrity culture.

Yet there's something doggedly heroic — and crassly venal, since he was handsomely paid — about Nixon's desperate attempt to resurrect his reputation and reclaim political relevance. Gauged by his previous encounter with Frost, recounted in savory detail for our benefit, Nixon felt that he had chosen the perfect vehicle for turning his career around one last time.

As the tapings proceed at the former president's beach home in California, the implied insult of Nixon's growing self-confidence is not lost upon Frost. Morgan takes pains to show us that Frost is in more desperate straits than Nixon: He has lost TV shows on three continents, and he no longer rates a table at Sardi's in New York. Frost is not only playing with house money from financial backers to get Nixon on the air, he is all-in with his own money, keeping the project afloat in the absence of commercial sponsors.

Looking more like Frost than any other actor I've seen in the role, West gets the personality balances just right. Surely there is more than sufficient sobriety in West's take on the British wannabe journalist — more glibness and suavity wouldn't be out of place — but not so much that we lose the playboy flavor notes or discount his staffers' misgivings that he is an intellectual lightweight, too easily awed by Nixon.

We go into Frost's encounter with Nixon on the tawdry Watergate affair with Morgan aptly likening the climax to a boxing match: Frost desperately needs a knockout because he has failed to lay a glove on his foe in previous rounds. Here is where the balance of West's portrayal pays off. Even though he's totally invested in the enterprise, we still doubt that Frost will muster sufficient pugnacity to break through Nixon's defenses. A silver bullet would help.

Wilson's portrait of Nixon, the dominant reason why the denouement works so well, is simply a marvel. My forecast that he'll sound to you like Trickie Dickie 60 percent of the time is to be taken as an assertion that Wilson goes significantly beyond mere Rich Little caricature, capturing the exact sound of Nixon more than half the time. Yes, the phony smile is a tad more layered on (and appealing) than it was in real life, but Wilson cleaves to the essence of the man, and Nixon's rages are all magnificent.

Set design by Robert Lee Simmons is a red-white-and-blue mix of TV glitz and White House decrepitude. As punctilious as director Michael Harris is about casting and nuancing his title characters, a couple of his supporting cast choices were overly eccentric when we encountered such celebs as newscaster Mike Wallace and tennis champion Evonne Goolagong.

Better were his picks for the cornermen of this storied bout: Scott C. Reynolds as Nixon's chief-of-staff, Jack Brennan, and Frost's advisors, Jon-Claude Caton as NPR's Bob Zelnick and Tom Ollis as reporter Jim Reston. Ollis and Reynolds share the narrated portions of the script, largely responsible for the impression of fairness left by Morgan's presentation.

Among the minor players shouldering multiple roles, I was most impressed by Elise DuQuette as Frost's quick pick-me-up, Caroline Cushing, and Dink Nolen III's work on Nixon's agent, "Swifty" Lazar. Nolen and Rigo Nova also team together effectively as the Cameramen who provide us with the live video feed of the interviews — and the signature close-up so pivotal in the public's takeaway.

This side of Children's Theatre of Charlotte, Carolina Actors Studio Theatre has deserved its reputation as the most audacious and proficient technical theater company in town. So from a technical standpoint, I can also confidently forecast that you'll see an even better overall performance of Frost/Nixon than the VIPs and I did.