The Passion of the Christ: His Cross To Bear | Features | Creative Loafing Charlotte
Switch to the mobile version of this page.

The Passion of the Christ: His Cross To Bear

By Matt Brunson @moviematt1 and Felicia Feaster
click to enlarge 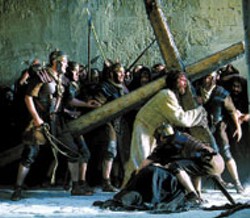 When Mel Gibson's highly anticipated The Passion of the Christ opened nationally last week, it was reasonable to assume that its arrival might have finally tempered the onslaught of opinion and information surrounding this controversial work - the studio hype, the charges of anti-Semitism, Gibson's curious comments regarding his personal beliefs. But if anything, the debate has only intensified, as the movie's merits continue to be discussed and dissected by Christians, Jews, news columnists, talk-show mavens, regular laymen, and seemingly everyone else this side of Saddam Hussein.

As for its critical reception, the movie has split reviewers as effectively as Moses dividing the Red Sea. It's a textbook case of everyone agreeing to disagree: Roger Ebert, the LA Weekly's Scott Foundas and USA Today's Claudia Puig are among the movie's champions, while the Los Angeles Times' Kenneth Turan, Newsweek's David Ansen and The New York Times' A.O. Scott can be counted among those who dissed the film.

Even within the blissful, harmonious universe of Creative Loafing, viewpoints have somewhat differed. Here, then, are two outlooks by Charlotte reviewer Matt Brunson and Felicia Feaster, a film critic for the Atlanta Creative Loafing.

There is no reason to doubt Mel Gibson's sincerity when it comes to religious matters. His excellent Vietnam War drama We Were Soldiers was that rare film to present its characters as devout Christians touchingly drawing their strength from God, rather than as the Bible-thumping, hypocritical rubes found in most Hollywood features. Likewise, such works as Braveheart and Signs were also imbued with deep spiritual undercurrents. Yet oddly, The Passion of the Christ (** out of four) has been created not so much by Gibson the True Believer but by Gibson the Sadist.

Many of Gibson's movies, whether it's Payback or The Patriot or the aforementioned Braveheart, have displayed a fetishistic fascination with blood and guts, and Passion is no exception. In relating the saga of Christ from his betrayal by Judas at the Garden of Gethsemane right up through the crucifixion, Gibson has basically taken the greatest story ever told and turned it into a snuff film.

The pacifist teachings aren't even allowed to take a back seat to the beatings and humiliations suffered by Christ -- instead, they're securely locked away in the trunk, with Gibson paying them only fleeting lip service through a series of clumsily integrated flashbacks that play like a sampling of Christ's Greatest Hits. The picture's emphasis is squarely on employing the best visual effects, makeup designs and slo-mo camerawork that money can buy to lovingly reveal every whip mark slashed across Christ's back, every thorn driven into His head, every nail hammered into His flesh. It's Kill Bill for the churchgoing crowd, an unrelenting orgy of evangelical ire that's about as subtle as those vintage educational films on venereal diseases that the US Army would screen for its recruits.

It's not that I was offended or put off by the film's excessive violence; on the contrary, an honest depiction of this tale probably needs to showcase such degrees of brutality up close and personal. But what's sorely missing from the movie is any meaningful context. Martin Scorsese's superb 1988 offering The Last Temptation of Christ -- still the best and most affecting religious flick ever made -- worked because it presented us with a Christ who was both fully God and fully man, not an untouchable icon but rather an immediate figure working through the pleasures and perils of life itself.

By contrast, Gibson's focus is so narrow that his film never gives us a sense of Jesus the Man -- all we get is Jesus the Martyr, who's forced to spend a tedious two hours incessantly beaten by spittle-spraying Roman soldiers. It's as if instead of the wide scope of Schindler's List, Steven Spielberg had decided to make a movie showing a single Jewish prisoner being stripped and sent to the showers. Or if instead of providing us with the expansive breadth of Roots, Alex Haley had opted to concentrate on the whipping and castration of one individual runaway slave. These are attention-grabbing, perhaps even worthwhile, endeavors, but ultimately they would exist within a narrative vacuum, and -- if we're to honestly examine their merits as works of popular culture -- they would probably leave most paying customers feeling unfulfilled.

Of course, this film's proponents would argue that since we're already familiar with the story of Jesus, we can fill in the blanks ourselves, but to me that feels like a cheat, a way for Gibson to get out of the sensitive side of the story in order to focus on its more sensationalistic aspects. It's as if Gibson (who, in addition to directing, also co-wrote the script with Benedict Fitzgerald) has taken a New Testament tale and filtered it through Old Testament sensibilities.

Needless to say, the mood is grim throughout, which means that Gibson's more fanciful touches awkwardly stand out and almost verge on camp. Satan appears at various points as an androgynous creature who bears such a striking resemblance to a 70s glam rocker that I half-expected David Bowie to saunter out at any minute to take part in a duet of "Suffragette City." Two monstrous children who torment Judas would seem better-suited to an Omen sequel, while one particular demonic minion -- a bald baby with an adult's face -- inspires more chuckles than shudders (one scribe has already referred to him as Satan's own Mini-Me).

As Jesus, Jim Caviezel (The Count of Monte Cristo) looks aptly beatific, yet he's so hamstrung by the one-note depiction that he never registers as anything more than a symbol. Other performers, including Monica Bellucci (The Matrix Reloaded) as Mary Magdalene and Romanian actress Maia Morgenstern as Mary, ably handle their equally sketchy parts. Curiously, the most fully rounded character is Pontius Pilate (well-played by Hristo Naumov Shopov), who is presented as a decent -- even sympathetic -- ruler who feels for Christ but who's ultimately too weak to stand up to His bloodthirsty persecutors. When the most developed character in a movie about Jesus Christ turns out to be a Roman, it might mean that the man in charge was losing his religion after all.

It would be hard not to be moved by The Passion of the Christ. Director Mel Gibson presents not only a graphic portrait of human suffering but also a dramatic cornerstone of film melodramas, of pathos-filled maternal love and the tension generated when horrific events build to a preordained conclusion.

The film records Jesus's (James Caviezel) death march to Golgotha, and some of its emotional profundity hinges upon Mary's expressions of despair. In a memorable performance by Maia Morgenstern, Mary watches her child brutally murdered before her eyes. The pain-filled pacifism of Mary and Magdalene (Monica Bellucci), as well as Christ's graphically depicted suffering in Passion, begs the question of what a film about the crucifixion would be like if made by a woman. (It may not be a coincidence that Gibson and the kinder-gentler Passion-maker Martin Scorsese, both Catholic boys, use young women in their horror-film depictions of Satan.)

Gibson's Christ is a man's man and undergoes the same rite of trial-by-blood that defines so many other action film heroes. Gibson is smart enough to emphasize a human dimension to this epic tale which allows even secular viewers an entry point into the drama. The human weakness and doubt of Christ's disciples as well as Roman political contingencies all interfere with people Doing the Right Thing.

On a fundamental level, the film reveals life's ordinary, worldly tests (of loyalty, love, belief) even as it affirms familiar Bible-cinema cliches. King Herod minces like one of Charles Laughton's campier roles. The thuggish dementia of the murderer Barabbas belongs in a Ray Harryhausen Sinbad movie. God's own tear becomes a sci-fi money shot.

Gibson puts his own slightly hysterical, crude imprint on the Christ story, proving that even faith is subject to the laws of hardly chaste human interpretation and agenda, as in Gibson's replacement of the more typically vilified Romans with Jesus's Jewish accusers. Flirting with anti-Semitism, Gibson paints the Pharisees as a corrupt institution, a mass of anonymous beards and hateful glances skulking beneath their hoods of power. Throughout his career, Gibson has both played and employed two-dimensional characters for dramatic effect. His desire to paint Christ's persecutors as conniving sadists and political manipulators plays neatly into the hands of anti-Jewish sentiment.

With its emphasis on meticulously represented brutality, Passion will be forever marked as a film of the early 21st century -- a time when even faith is discussed in the foaming-at-the-mouth, black-and-white, furious terms of talk radio. The Passion of the Christ is a Bible story for a darker, bloodier, fundamentalist age when Muslims, Christians and Jews seem to be consistently represented by the most vicious and bloodthirsty of their lot.

A review of The Passion of the Christ feels nearly extraneous after all its hype has neatly divided its audience into politicized camps. Convenient though it may be to just insert yourself into your pre-formulated demographic (thus playing your part in filling the Gibsonian coffers), the subject matter demands a more complex response.

The emotional power of the film cannot be owned strictly by Gibson or anyone else who might use Christ as some politicized martyr of tax cuts for the rich and war in Iraq. Beyond Gibson's obvious marketing appeals are the voices of the players, like Caviezel's own expressions of deeply felt Catholicism which defy Gibson's efforts to sensationalize.

And the Passion itself engages with both the timeless, non-denominational human capacity for sadistic cruelty and faith in the face of inconceivable obstacles. It reaches beyond the parameters of Gibson's Personal Jesus.

Tags: Features, review, The Passion of the Christ, Matt Brunson