In Cold Blood, Living in Oblivion, No Escape among new home entertainment titles | View from the Couch | Creative Loafing Charlotte
Switch to the mobile version of this page.

In Cold Blood, Living in Oblivion, No Escape among new home entertainment titles

BLOOD AND LACE (1971). Pity the accomplished actors and actresses from Hollywood's glory years, those award-winning thespians who later found themselves winding down their illustrious careers by appearing in grade-Z horror yarns or Italian cheapies. On that lengthy list that includes the likes of Joan Crawford, Ida Lupino, Joseph Cotton, Veronica Lake and Arthur Kennedy, make room for Gloria Grahame. One of the best actresses to make her mark during the 1950s — she won her Oscar for The Bad and the Beautiful and also co-starred in In a Lonely Place, The Big Heat and (as Ado Annie) Oklahoma! — Grahame here finds herself trapped in a lurid thriller far beneath her talents. She plays Mrs. Deere, who runs an orphanage for troubled teens and who harbors some strange ideas about life and death. Into her home comes Ellie Masters (Melody Patterson), who fears she might be the next victim of the hammer-wielding psycho who murdered her mother. The unusual setting helps, and the film ends on a string of plot twists, some less predictable than others. The supporting roster includes some familiar faces: Vic Tayback (Mel on TV's Alice) as a lecherous detective, Len Lesser (Uncle Leo on TV's Seinfeld) as a lecherous handyman, and Dennis Christopher (Breaking Away) as a teenager who is decidedly not lecherous but does raid the fridge a lot.

Blu-ray extras consist of audio commentary by film historian Richard Harland Smith; an alternate opening title (the one actually sporting the title Blood and Lace; the higher quality one used for the actual film employs the lesser known moniker The Blood Secret); and the theatrical trailer.

BROKEN LANCE (1954). This sturdy Western is basically William Shakespeare by way of Joseph L. Mankiewicz, as the shadow of King Lear looms large over this loose remake of 1949's Mankiewicz production House of Strangers. Philip Yordan had a hand in writing both pictures, setting the action for the first within the context of a modern crime story and reworking it into an oater for the second. Spencer Tracy is patriarch Matt Devereaux, who favors the one son (Robert Wagner) he sired with his current — and Native American — wife (Katy Jurado) over the three (Richard Widmark, Hugh O'Brian and Earl Holliman) from his previous marriage. This naturally causes all manner of familial strife, as does Matt's brusque, even cruel, treatment of most of those around him. Here's another towering Tracy performance to add to the pile, as well as another opportunity for Widmark to ably play the sort of role — the intelligent yet underhanded heel — at which he excelled. And as is usually the case with Wagner, he's perfectly acceptable if hardly inspiring, though he does enjoy some nice moments opposite Jean Peters as his independent-minded intended. Yordan earned an Oscar for Best Motion Picture Story, with Jurado nabbing a Best Supporting Actress nomination. 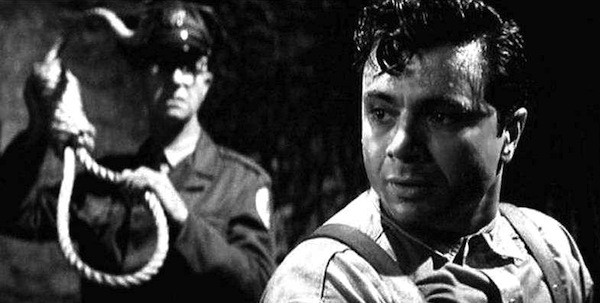 IN COLD BLOOD (1967). The 2005 drama Capote, featuring Philip Seymour Hoffman's Oscar-winning performance as author Truman Capote, was a solid film, but its flaw was that it didn't provide enough of an overview of the social raconteur's life and instead largely focused on his efforts to research and write In Cold Blood. In that respect, the movie pales when compared to comparable scenes in this superb adaptation of the bestselling novel, which takes almost a documentary approach in its staging of a real-life tragedy. Robert Blake (eight years before achieving TV stardom on Baretta) and Scott Wilson play Perry Smith and Dick Hickock, two ex-cons who in 1959 brutally murder a Kansas family (mom, dad and two children) and are then rightly made to pay for their heinous crime. Writer-director Richard Brooks' detached style allows for a non-exploitative presentation, and the contributions by cinematographer Conrad Hall and composer Quincy Jones are first-rate. While In Cold Blood failed to be nominated for a Best Picture Academy Award (presumably, its slot went to the critical and commercial bomb Doctor Dolittle, for which Fox notoriously held lavish banquets in a successful effort to sway voters), it did nab four other nominations: Best Director, Adapted Screenplay, Cinematography and Original Music Score.

Blu-ray extras include interviews with author Douglass K. Daniel (Tough As Nails: The Life and Films of Richard Brooks), director of photography John Bailey, film historian Bobbie O'Steen and film critic Gary Giddins discussing, respectively, the film's direction, cinematography, editing and music; an interview with Brooks from a 1988 episode of the French TV series Cinéma cinéma; the 1966 documentary short With Love from Truman; and two archival interviews (one by Barbara Walters) with Capote.

LIVING IN OBLIVION (1995). The hellish world of low-budget filmmaking is the subject of writer-director (and North Carolina native) Tom DiCillo's wickedly funny satire Living in Oblivion, which copped a screenwriting award at the Sundance Film Festival and became a minor indie hit in the mid-90s. Steve Buscemi stars as Nick Reve, an eager-beaver young director struggling to make a feature film with the help — and hindrance — of an insecure leading lady (Catherine Keener), a self-centered actor (James Le Gros), and a cameraman (Dermot Mulroney) who dresses like a guerilla fighter. The segment in which Nick attempts to film a dream sequence (not unlike the famous one from TV's Twin Peaks) featuring a dwarf named Tito (Peter Dinklage) is worth the rental/purchase price alone. Incidentally, DiCillo's previous film (his debut picture) was 1992's Johnny Suede, and rumors at the time persisted that Chad Palomino, the narcissistic and imbecilic actor played by Le Gros in Oblivion, was based on DiCillo's experiences working with Johnny Suede star Brad Pitt; for his part, DiCillo has long denied that the character was inspired by Pitt but does admit that it was based on someone.

Extras on the 20th Anniversary Blu-ray Edition include audio commentary by DiCillo; a making-of piece featuring new interviews with DiCillo, Buscemi, Le Gros, Dinklage and others; a Q&A session with DiCillo and Buscemi; and a deleted scene.

NO ESCAPE (2015). Maybe it's because of personal experience that I've always been a sucker for political thrillers set in foreign lands. During my childhood, my family left Argentina at the start of the "Dirty War" and arrived in Kenya mere days after a failed coup (a mandated curfew meant evenings were spent watching military vehicles patrol the empty streets from the safety of our hotel room). Even the interim years in Portugal found my father, a Firestone plant manager, held hostage for several days at his factory. These memories were brought to the surface during No Escape, a harrowing drama in which foreigners try to stay alive following a coup in an unidentified Asian country. With its paranoid view of living abroad — the takeaway from the film is that Americans should never leave the U.S. but instead be content munching on Big Macs and watching Modern Family — it's easy to understand why this was hammered in many quarters as offensive agitprop. But I'd be lying if I didn't admit that it works on a gut level — aside from Sicario, I haven't seen a more intense motion picture during all of 2015. No Escape does suffer from the usual decree that the problems of a few little people don't amount to a hill of beans in this crazy world, unless, of course, the little people are white and the crazy world is comprised of darker skinned individuals. But at least the film acknowledges the reason for the discontent — namely, that a fascistic American corporation has through shady means been able to secure and control the nation's water supply. Xenophobic twits like Donald Trump will bristle at this anti-capitalist message, but more intelligent folks will once again realize that the United States' claim of Manifest Destiny didn't end with the acquisition of the West Coast.

RICKI AND THE FLASH (2015). Meryl Streep sprints past the ABBA songbook to tackle a wide range of infectious tunes in this middling seriocomedy that works better when its emotions are raw than when its scenarios are rigged. Streep plays Ricki Rendazzo, who abandoned her prim and proper family long ago to pursue her rock 'n' roll dream. Singing covers at a California watering hole with her band the Flash, she's beckoned back to Indianapolis by her ex-husband (Kevin Kline), who's worried about their daughter Julie (Mamie Gummer, Streep's real-life daughter). Having been abandoned by her husband for another woman, Julie's a suicidal wreck, and while Mom has never really been around much to provide maternal comfort, she's hoping it's not too late. With a script by Diablo Cody (Juno) and direction by Jonathan Demme (The Silence of the Lambs), Ricki and the Flash mines the various confrontations in a manner that causes an appropriate level of discomfort among both characters and viewers. These standoffs bring out the best in Streep, who hadn't delivered an interesting performance since 2009's Julie & Julia, and represent many of the film's most memorable sequences. But the script too often works overtime to provide uplifting, cathartic moments that feel artificial rather than earned, and all conflicts are eventually ignored instead of being resolved. Like Demme's Rachel Getting Married, this also ends with a wedding. Yet unlike that 2008 sleeper about an equally dysfunctional family, any goodwill here feels more like the scripter's forced hand than the characters' hard-earned victories.

Blu-ray extras include a making-of featurette; deleted scenes; and a cast photo gallery.

SCORPIO (1973). The strain of cynicism and paranoia that marked the majority of 70s political thrillers — superb pictures like The Parallax View and Three Days of the Condor — can be found in the effectively dour Scorpio, which often feels like a Yankee version of the sort of espionage tales being churned out by John le Carré over in England. Burt Lancaster provides the proper measure of weary resignation to his turn as Cross, a longtime CIA agent who learns that his own agency has put out a hit on him — and that the person ordered to squeeze the trigger is his own protégée, a cool-as-ice Frenchman known as Scorpio (Alain Delon). The remainder is the usual mix of lengthy chases, clandestine meetings and tantalizing double crosses, all smoothly pulled off by director Michael Winner (a year before helming his biggest hit, the Charles Bronson vigilante flick Death Wish) and writers David W. Rintels and Gerald Wilson. Paul Scofield turns up in a key supporting role as Zharkov, a Soviet agent and the closest thing Cross has to a true friend. And here's an absolutely inconsequential but nevertheless amusing trivia point: In this film, actor J.D. Cannon plays a character whose superior is an FBI director named McLeod (John Colicos), while on television during this period, Cannon played a police chief who's the superior of a detective named McCloud (Dennis Weaver).

Tags: View from the Couch, film, review, View From The Couch, Blu-ray, DVD, Matt Brunson, Blood and Lace, Broken Lance, In Cold Blood, Living in Oblivion, No Escape, Ricki and the Flash, Scorpio