It Comes at Night, The Mummy, Re-Animator among new home entertainment titles | View from the Couch | Creative Loafing Charlotte
Switch to the mobile version of this page.

It Comes at Night, The Mummy, Re-Animator among new home entertainment titles

THE BIG KNIFE (1955). A Clifford Odets theatrical piece morphs into a Hollywood-insider movie, and while the staginess remains, it actually suits this claustrophobic story about a self-proclaimed artist suffocating from all the concessions he’s had to make along the way. Jack Palance (in a role played by the great, soon-to-be-late John Garfield in the Broadway incarnation) plays Charles Castle, a movie star who’s disgusted that he’s trapped in subpar productions by vulgar studio boss Stanley Hoff (Rod Steiger). Castle is separated from his upstanding wife (Ida Lupino), who hints that she might return if he refuses to sign a seven-year contract with Hoff – Charles agrees with her in principle, but he’s bound to Hoff by a dirty secret that if exposed would destroy his career. Aside from a precious few characters like Lupino’s sympathetic spouse and Everett Sloane’s compassionate agent, Odets and director Robert Aldrich are only interested in showcasing Tinseltown’s most horrible citizenry, from the soulless studio flunky (Wendell Corey) to the loathsome gossip columnist (Ilka Chase) to the immoral floozies (Jean Hagen, Shelley Winters). Palance is excellent; Steiger starts off strong by underplaying before eventually hamming it up in prime Steiger fashion.

Blu-ray extras consist of audio commentary by film critics Glenn Kenny and Nick Pinkerton; a vintage promotional piece; the 1977 documentary short Bass on Titles, with a look at some of the opening title designs by the legendary Saul Bass (whose credits include Psycho, Seconds, Anatomy of a Murder, and, yes, The Big Knife); and the theatrical trailer.

IT COMES AT NIGHT (2017). Writer-director Trey Edward Shults’ post-apocalyptic paranoia thriller brings to mind the minimalist, simmering sensations of Take Shelter and The Road more than it recalls the usual epic sagas involving zombies or road warriors. It’s a compact thriller that mostly succeeds until an ending that doesn’t feel ambiguous as much as it feels unfocused and unfinished. Living in their isolated cabin in the woods are dad Paul (Joel Edgerton), mom Sarah (Carmen Ejogo) and 17-year-old son Travis (Kelvin Harrison Jr.) — they’re attempting to stay as far away as possible from whatever plague has apparently destroyed most of humankind and just recently removed Sarah’s father from their ranks. Their isolationism is broken by the unexpected arrival of Will (Christopher Abbott), who, like Paul, is only concerned about the well-being of his family. It’s decided that Will, his wife Kim (Riley Keough) and their little boy Andrew (Griffin Robert Faulkner) will also move into the house, a decision that ultimately leads to disaster. The abundant dream sequences that initially feel like padding (the film is barely 90 minutes long) are eventually revealed to be part of the film’s fabric, yet such a realization doesn’t alleviate the suspicion that Shults wrote himself into a corner – that would certainly explain the hurried and disappointing denouement. Still, the performances are suitably slow-burning, and despite the commonplace message that the worst monsters are the ones in human form, Shults punches it across in an impressively nihilistic manner.

Blu-ray extras consist of audio commentary by Shults and Harrison Jr.; a making-of featurette; and theatrical trailers for other recent releases. 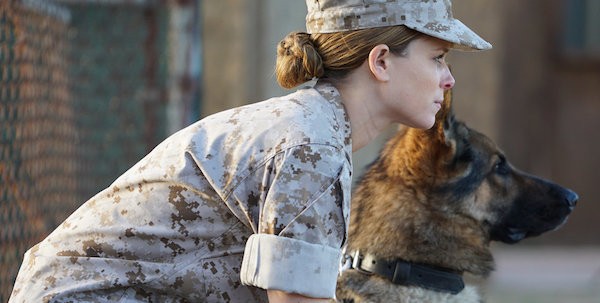 MEGAN LEAVEY (2017). A documentary filmmaker best known for the absorbing SeaWorld expose Blackfish, Gabriela Cowperthwaite made her dramatization debut with Megan Leavey, an occasionally harrowing and always touching look at the bond that developed between a Marine and her combat dog. Working from a script credited to three writers (including Bridesmaids’ Oscar-nominated scribe Annie Mumolo), Cowperthwaite opts to bypass the macho swaggering favored by the likes of Clint Eastwood and Peter Berg in their modern-warfare flicks to fashion a more emotionally involving tale — this one examining how a young screw-up named Megan Leavey (Kate Mara) only finds purpose and direction in her life after she joins the Marines and takes part in a program wherein soldiers work alongside dogs trained to sniff out explosive devices. Megan is assigned to handle a temperamental German shepherd named Rex, and they end up partaking in two deployments in Iraq during the 2000s. The Iraqi scenes are intense, but equally compelling are the stateside sequences that find Megan fighting to gain custody of Rex, even going so far as to enlist the aid of Democratic Senator Chuck Schumer (since, as has nauseatingly been proven time and again, those on the other side of the aisle don’t give a damn about this country’s veterans). Like other conscientious movies dealing with wartime, Megan Leavey understands that many of the most important fights continue to be waged long after the actual battlefields have been vacated.

The only Blu-ray extra is a making-of piece.

THE MUMMY (2017). A plastic product made by mercenaries, pimps and profiteers rather than filmmakers who give a damn, The Mummy is the first entry in what Universal is billing as Dark Universe, the studio’s attempt to duplicate the interconnected worlds showcased by Marvel and DC. But given the desultory picture on view here, here’s a tentpole project that has its work cut out for it — thankfully, the only way is up. The titular monster is Ahmanet (Sofia Boutella), an Egyptian evildoer whose pact with the god Set leads to her being buried alive. Cut to the present day, where her tomb is discovered by wacky adventurers Nick Morton (a badly miscast Tom Cruise) and Chris Vail (Jake Johnson) and furrowed-brow archaeologist Jenny Halsey (Annabelle Wallis). While transporting the coffin to London, where Dr. Henry Jekyll (Russell Crowe, laughable) is eager to examine its contents, our heroes allow Ahmanet to awaken and escape. It’s up to Nick to save the day, although he’s clearly overworked: He’s been picked by Ahmanet to serve as her Chosen One, and he’s forced to play Hyde-and-seek with an increasingly irate Jekyll. The Mummy is so scattershot that it never retains any forward momentum from one scene to the next. The comic relief, with a plot device lifted directly from An American Werewolf in London, is downright painful, and since the shuffling zombies look like they were imported from the music video for Michael Jackson’s “Thriller,” it’s clear that here’s a monster movie that will be providing nothing in the way of thrills or chills. The CGI technicians are, as expected, kept busy busy busy, but the effects in this bomb remain impersonal and ineffectual.

Blu-ray extras include audio commentary by director Alex Kurtzman, Boutella, Wallis and Johnson; a making-of featurette; deleted scenes; and a discussion between Cruise and Kurtzman. 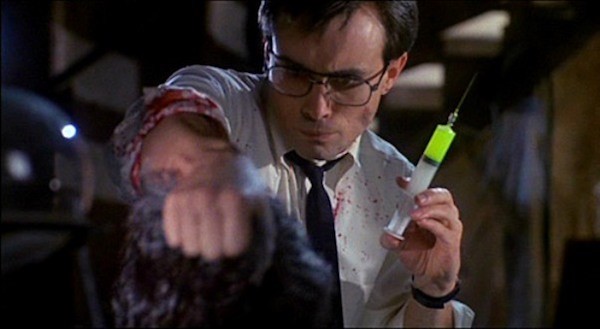 RE-ANIMATOR (1985). It's no match for The Evil Dead, but as far as tongue-in-bloody-cheek gorefests go, this update of the H.P. Lovecraft tale is a lot of fun, and it easily earns its cult status. I fondly recall first seeing this not long after its original theatrical release, as part of an all-night Halloween triple feature at the long-defunct Town Cinema near UNC-Charlotte: After thrilling to George Romero's Dawn of the Dead and then slowly being put to sleep by some dull Italian horror yarn, the audience was awakened (re-animated?) circa 4 a.m. by the feverish opening sequence of this adrenaline-fueled exercise in splatter. Jeffrey Combs (very funny) plays Herbert West, a young medical student who discovers a way to revivify first a cat, then a cadaver, and finally deceased colleagues within his university's science department. Bruce Campbell stand-in Bruce Abbott plays Dan Cain, the nice-guy graduate student who becomes West's reluctant accomplice, Barbara Crampton co-stars as Cain's fiancée, and David Gale portrays the professor who plots to steal both West's discovery and Cain's girl. All of this leads to the movie's most notorious sequence, which lends a lurid new twist to the expression "giving head." 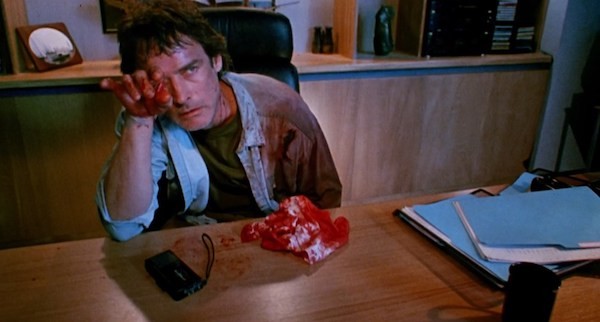 THE RESURRECTED (1991). Re-Animator isn’t the only recent Blu-ray release to dabble in Lovecraftian horror. Based on H.P.’s story “The Case of Charles Dexter Ward,” The Resurrected (known in some circles as Shatterbrain) stars Chris Sarandon as the title character, a scientist whose loopy behavior convinces his wife (Jane Sibbett) to hire a private investigator (John Terry) to unearth her hubby’s shady activities. An evil wizard, misshapen monsters, and a doppelganger of sorts all eventually materialize in an ambitious but underwhelming movie that was primed for theatrical release but logically sent straight to video instead.

Blu-ray extras include audio commentary by writer Brent V. Friedman, co-star Richard Romanus, and others; interviews with Friedman, Sarandon, Sibbett and more; deleted and extended scenes; and trailers for the film’s home video release and its release in Japan.

ROUGH NIGHT (2017). Never a Bridesmaids but always a Bridesmaids wannabe, Rough Night was a summer dud that looked even more puny once the superior Girls Night Out opened a few weeks later. Five women — sensible Jess (Scarlett Johansson), needy Alice (Jillian Bell), sophisticated Blair (Zoe Kravitz), outspoken Frankie (Ilana Glazer) and eccentric Aussie Pippa (Kate McKinnon) – head to Miami for a bachelorette party, only to spend most of their time trying to cover up their accidental killing of a male stripper. While the movie never gets as ugly as 1998’s comparable Very Bad Things, the filmmakers never find the proper degree at which to pitch their black comedy, making the scenario more lurid than intriguing. In addition, there just aren’t many laughs, with the great McKinnon largely wasted and Bell receiving far too much screen time while playing a truly odious character.

Blu-ray extras include deleted scenes and a gag reel. 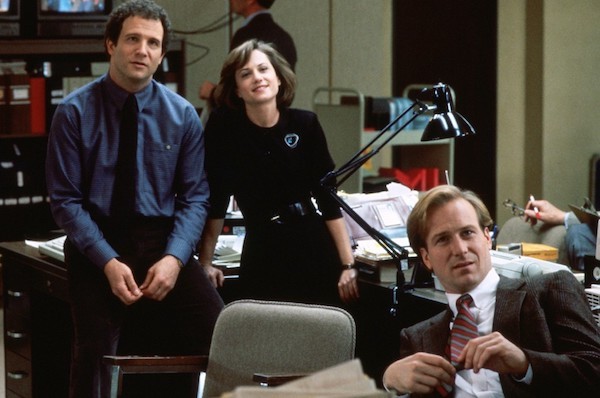 BROADCAST NEWS (1987). One of the driving forces behind such TV milestones as Mary Tyler Moore, Taxi and The Simpsons, James L. Brooks successfully turned to the cinema in 1983 with Terms of Endearment, earning countless awards (including three Oscars) for writing, directing and producing his first theatrical at-bat. He clearly suffered no sophomore slump with Broadcast News, which remains one of the brightest and best pictures of the past few decades. Perceptive on several levels — particularly in its study of romantic entanglements, its take on the role of the media, and its commentary on style versus substance — this finds Holly Hunter delivering the best female performance of the 1980s as Jane Craig, a feisty TV news producer working at a Washington, DC bureau. Her best friend is Aaron Altman (Albert Brooks), an insecure news reporter whose simmering love for Jane is threatened by the arrival of Tom Grunick (William Hurt), a novice anchorman whose charm and good looks help disguise the fact that he's not especially smart. With its look at how the world of hard news (and the serious journalists who inhabited it) was slowly giving way to sensationalism and infotainment, the film has proven to be remarkably prescient. Broadcast News earned seven Academy Award nominations (including ones for Best Picture and all three stars) but went home empty-handed, bested in most categories by The Last Emperor and Moonstruck (Cher over Hunter? Come on...). (Hulu)