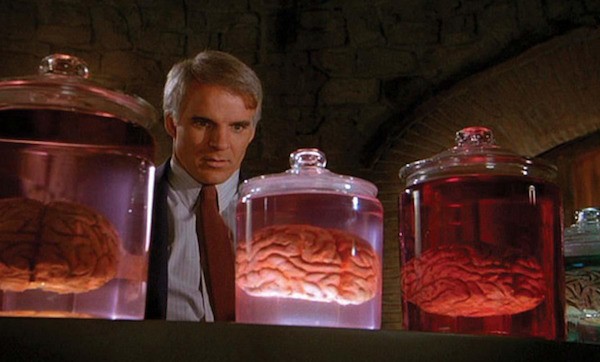 THE MAN WITH TWO BRAINS (1983) / MY BLUE HEAVEN (1990). That wild and crazy guy – Steve Martin, natch – headlines a pair of comedies that have just been released on Blu-ray courtesy of the Warner Archive Collection.

Martin plays Dr. Hfuhruhurr, Kathleen Turner spoofs her star-making Body Heat role, and the Elevator Killer turns out to be the last person you would suspect. And so it goes in The Man with Two Brains, a zany comedy that contains more than enough hits to counter the occasional misses. Martin, writer-director Carl Reiner and co-scripter George Gipe, who offered a parody of film noir classics with the previous year’s Dead Men Don’t Wear Plaid, here set their sights on those vintage horror yarns that showcased mad scientists toiling away in enormous laboratories. The brilliant and conceited Hfuhruhurr, still in love with his late wife, finds a new love in Dolores Benedict (Turner), realizing only after they’re married that she’s a manipulative gold digger. As he frets over his matrimonial mismatch, he telepathically establishes a relationship with sweet Anne Uumellmahaye, whose brain (voiced by Sissy Spacek) is kept in a jar by eccentric Dr. Alfred Necessiter (David Warner). Select moments are too silly for their own good, but overall, this is a bright and lively movie with a clever hook and a satisfying resolution.

The 1990 modern classic GoodFellas centered on real-life mob informant Henry Hill, but the story doesn’t end there. While screenwriter Nicholas Pileggi was adapting his own novel for the Martin Scorsese flick, Pileggi’s wife Nora Ephron was penning her own script based on Hill’s exploits. With the yarn refashioned as a comedy and Hill’s name changed to Vinnie Antonelli, My Blue Heaven opened in August 1990 — and was pretty much out of theaters when GoodFellas premiered a mere five weeks later. Whereas the Scorsese flick examined Hill’s life as a gangster, My Blue Heaven offers a fictionalized take on what happens after Hill – excuse me, Vinnie Antonelli – enters into the Witness Protection Program and is sent to live in a dull California suburb. The comedy arises from the spectacle of Vinnie – played by Martin as an over-enunciating caricature with spiked hair and flashy clothes – walking unfettered through this tame landscape, with Rick Moranis (as an FBI agent) and Joan Cusack (as a D.A.) providing the ever-so-modest conflicts. A frequently blasé script is elevated by the winning performances of the three stars.

The only extra on each Blu-ray is the theatrical trailer. 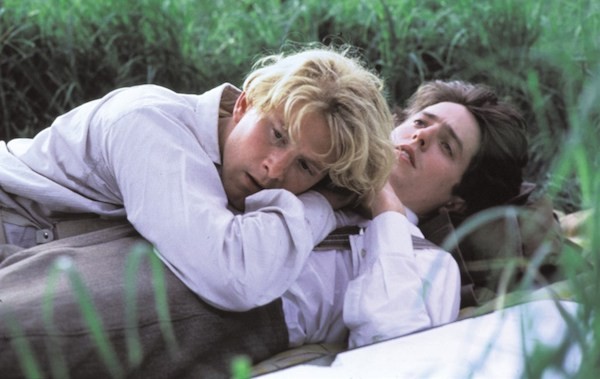 MAURICE (1987). The tony team of director James Ivory and producer Ismail Merchant earned sizable art-house income, critical raves, and boatloads of awards for two of their three E.M. Forster adaptations, 1986’s A Room with a View and 1992’s Howards End. Maurice, an adaptation of the novel that (as per Forster’s wishes) only became published following the author’s death in 1970, largely slipped through the cracks at the time of its initial release, although it’s worth another look — particularly in the beautifully restored Blu-ray edition just released via the Cohen Film Collection. Certainly, the film's place in gay cinema was cemented from the start, since it offered a refreshingly honest and sympathetic look at homosexuality in the age of Ronald Reagan and AIDS. James Wilby stars as the title character, a Cambridge lad who ends up in a loving yet platonic relationship with fellow student Clive Durham (Hugh Grant). Yet societal expectations – to say nothing of England’s abhorrent punishments for anyone caught engaging in homosexual acts – temper their actions and expectations, with Clive reluctantly gravitating toward women and Maurice seeking help from a doctor (Ben Kingsley) who employs hypnotism as a cure. A protracted running time allows much of the story’s passion to seep out, but this remains an impressive and even important motion picture. Jenny Beavan and John Bright, who picked up the Best Costume Design Oscar the previous year for A Room with a View, earned another nomination for their work here.

Blu-ray extras include deleted scenes; an interview with Ivory and director of photography Pierre Lhomme; a 2004 retrospective piece featuring interviews with Wilby and Grant; and the theatrical trailer. 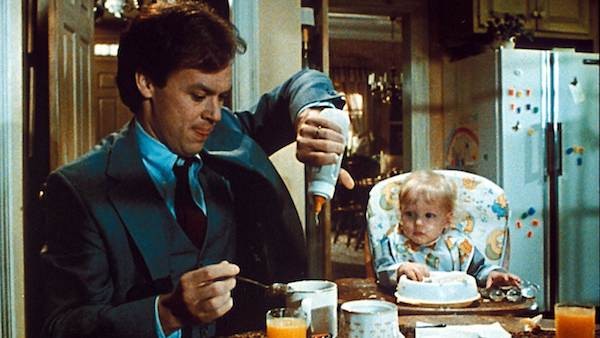 MR. MOM (1983). Michael Keaton’s hysterical performance in Ron Howard’s 1982 comedy Night Shift deservedly turned the actor into an overnight star, and he built on his good fortune with a follow-up project that ended up becoming one of 1983’s top 10 box office hits. Written by John Hughes, Mr. Mom casts Keaton as Jack Butler, a Detroit automobile designer who unexpectedly loses his job. Unable to find employment, he ends up staying at home with the three kids while his wife Caroline (Teri Garr) lands a job at an advertising firm – soon, Jack is drinking during daylight hours, getting emotionally attached to the soap opera The Young and the Restless, and warding off passes from a horny neighbor (Ann Jillian). Mr. Mom rarely rises above the level of a polished TV sitcom, and the notion of a stay-at-home dad, treated here as The Craziest Idea Ever!, had already taken root by 1983. Still, it’s hard to resist Keaton in this seemingly tailor-made role, whether he’s entertaining the neighborhood wives with poker marathons (with supermarket coupons as the winnings) or underhandedly threatening Caroline’s lascivious boss (Martin Mull) with a roaring chainsaw. Garr, as always, shines in support, and look for Christopher Lloyd and Jeffrey Tambor as two of Jack’s former coworkers.

Blu-ray extras consist of a retrospective featurette and the theatrical trailer.

NIGHT MOVES (1975). The missing link between the great paranoia thrillers of the 1970s (The Parallax View, Three Days of the Condor, etc.) and the great neo-noir deconstructions of the 1970s (Chinatown, The Long Goodbye, etc.), Night Moves has finally moved the needle from being one of the most overlooked gems of its decade to at least receiving its due from the more discerning film fans still out there. Working again with Bonnie and Clyde director Arthur Penn, Gene Hackman is typically terrific as Harry Moseby, a private investigator who agrees to head to the Florida Keys to track down a 16-year-old nymphet (Melanie Griffith in her film debut) and bring her back to Los Angeles. Alan Sharp’s excellent script cannily presents a mystery that doesn’t even come into focus until late in the film, and his dialogue is pointed and forceful throughout — “I saw a Rohmer film once. It was like watching paint dry” is now a classic, although “He’d fuck a woodpile on a chance there was a snake in it” is always good for a laugh. James Woods appears in one of his earliest roles as Quentin the fidgety mechanic, and that’s future Adam Sandler handler Dennis Dugan (Grown Ups, Jack and Jill) as the obnoxious guy in the bar. The film's final six-minute stretch – a masterful marriage of propulsive direction, razor-sharp editing and thematically weighty scripting – ranks among the finest denouements in all of ‘70s cinema.

Blu-ray extras consist of a behind-the-scenes featurette and the theatrical trailer. 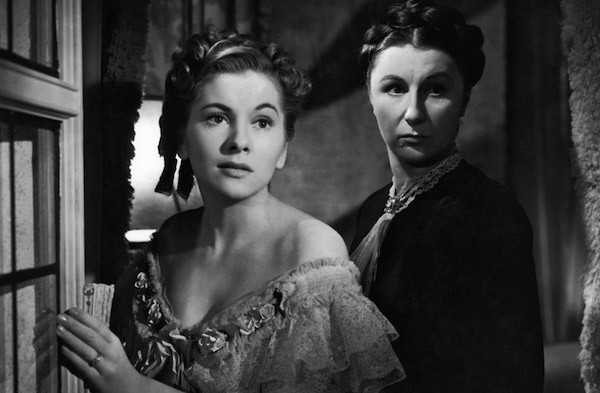 REBECCA (1940). Made under the auspices of producer David O. Selznick (Gone with the Wind), Rebecca was Alfred Hitchcock's first Hollywood movie after a stellar run in his native England — to say that it proved to be a potent calling card would be putting it mildly. In this adaptation of Daphne du Maurier's novel, Laurence Olivier and particularly Joan Fontaine are effective as the brooding Maxim de Winter and his timid second wife, but the real show-stopper remains Judith Anderson's formidable turn as Mrs. Danvers. Slinking through the halls of the Manderlay estate like a giant black widow, this creepy housekeeper, still in love with the former — and now deceased — mistress of the house (the Rebecca of the title), does everything in her power to drive the new Mrs. de Winter mad. Nominated for 11 Academy Awards (including bids for Hitchcock, Olivier, Fontaine and Anderson), this won for Best Picture and Best Black-and-White Cinematography.

Blu-ray extras include audio commentary (from 1990) by film scholar Leonard J. Leff; a 2007 making-of piece; an interview with film historian Craig Barron on the film’s visual effects; footage from screen tests for various actresses auditioning for Fontaine’s role, including Vivien Leigh and Anne Baxter; and Tomorrow interviews with Hitchcock in 1975 and Fontaine in 1980. 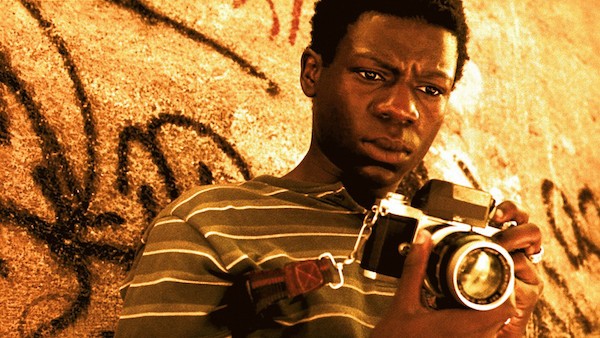 CITY OF GOD (2002). This Brazilian import is a dazzling achievement that marked Fernando Meirelles as a world-class filmmaker (his subsequent credit would be The Constant Gardener, the best film of 2005). Based on actual events, City of God (Cidade de Deus) takes a hard look at a Rio de Janeiro slum and dissects the lifestyle of the violent kids who rule with a bloody fist. As depicted here, the "City of God" (the name given to the area) is nothing less than a war zone, with blood flowing as swiftly and steadily as water over Niagara Falls. Our clean-cut protagonist in this urban epic is Rocket (Alexandre Rodrigues), whose desire to become a professional photographer might be just the thing to lift him out of the surrounding squalor. On the opposite end, there's Li'l Ze (Leandro Firmino da Hora), a rabid gang leader prone to killing anybody at any time. Admittedly, it's tough to withstand 130 minutes of continuous nihilism, but Meirelles and his contributors are so completely in command of this material (the storytelling moves like mercury) that it's impossible not to get caught up in their descent into Hell on Earth. City of God unexpectedly landed four major Oscar nominations: Best Director, Adapted Screenplay, Cinematography and Film Editing. (Netflix Streaming)