Kingsman: The Secret Service: The spy who came in from the old | Reviews | Creative Loafing Charlotte
Switch to the mobile version of this page.

Kingsman: The Secret Service: The spy who came in from the old 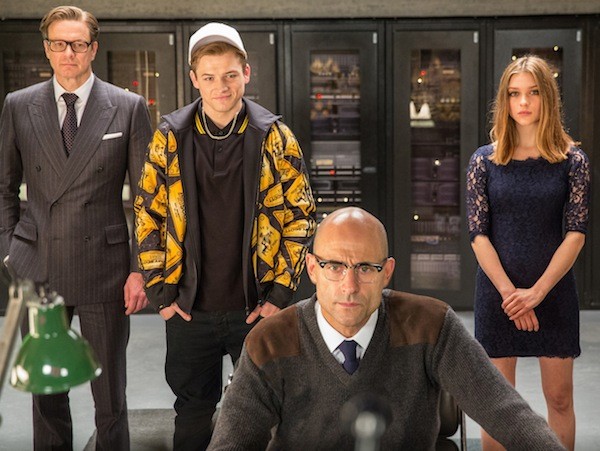 Kingsman: The Secret Service is crammed with so many references to classic spy stories of film and television that it's only appropriate to begin this review in like fashion. Your mission, should you choose to accept it, is to catch this grandly entertaining picture ASAP and thereby allow it be successful enough to pave the way for the anticipated sequels. Because if moronic tentpoles like Dumb and Dumber and Paul Blart: Mall Cop are deemed worthy of follow-ups, then why should this brainy franchise be forced to self-destruct after a paltry five seconds in the multiplexes?

The fourth crack at comic-based material for writer-director Matthew Vaughn and co-scripter Jane Goldman (following the excellent X-Men: First Class, the enchanting Stardust and the underwhelming Kick-Ass), Kingsman is first and foremost a salute to British secret agent James Bond, the suave, martini-sipping spy created by novelist Ian Fleming and immortalized by Sean Connery, Daniel Craig and a few other dapper gents. This 007 allegiance is evident even before entering the theater, as one of the posters owes its design to the classic one for 1981's For Your Eyes Only. As for the Kingsmen seen in the film, they could easily be (like Bond) members of Her Majesty's Secret Service, protecting king and country (to say nothing of the rest of the planet) from the usual misguided machinations of megalomaniacs.

In this case, it's Kingsman Harry Hart (Colin Firth) who's tasked with discovering the dastardly scheme of an environmentally aware millionaire named Valentine (Samuel L. Jackson), a lisping, violence-prone jokester who resembles nothing so much as Family Matters' Steve Urkel all grown up. Known within the organization as Galahad (rather than Double-Oh numbers, these gents sport monikers from Arthurian legend), Harry is shaken by the death of fellow agent Lancelot (Jack Davenport), who was sliced in two by Valentine's unusually limbed henchwoman Gazelle (Sofia Boutella). With Kingsman head Arthur (Michael Caine) calling for suggestions to take over as the new Lancelot, Harry nominates Eggsy Unwin (Taron Egerton), the son of a fallen Kingsman recruit and a street kid more familiar with fisticuffs than cufflinks. Yet among all the candidates being tested by the behind-the-scenes Kingsman known as Merlin (Mark Strong), Eggsy quickly proves himself to be one of the most promising, jockeying for the Lancelot spot opposite equally skilled competitors Roxy (Sophie Cookson) and Charlie (Edward Holcroft).

The training of these young pups brings to mind similar scenes in Vaughn's X-Men prequel, but in all other respects, Kingsman registers as a spy game from first frame to last. There are the Bond homages, of course (not least being a dagger-adorned shoe not unlike the one sported by Lotte Lenya in From Russia with Love), but other espionage sagas also factor into play, from a throwaway gag line invoking TV's Get Smart to the casting of Caine — Cold War spy Harry Palmer in three 1960s thrillers — in a key role. The picture cannily works on two fronts, not only operating as a bona fide throwback flick but also subverting the genre in imaginative ways.

As expected, the vets all excel in their assignments, particularly Jackson (nailing it after a similar, but poorly executed, villainous role in The Spirit) and Strong. Equally enticing are newcomers Egerton and Cookson, who have a nice rapport as the two rookies who are constantly watching out for each other. Boutella, meanwhile, makes for a memorable heavy, and it's her character who's responsible for much of the film's over-the-top violence. If the film occasionally feels almost as casually cruel as Vaughn's Kick-Ass (like Kingsman, also based on a property by comic guru Mark Millar), at least there's more wit and empathy in this case to mask the cynicism. At any rate, much of the gruesomeness is unexpectedly cartoonish, as when a character's head explodes with all the believability exhibited in a 1980s-era fantasy flick like Big Trouble in Little China or a low-rent Scanners sequel. Clearly, Kingsman: The Secret Service likes to leave viewers both shaken and stirred, and it accomplishes that by always keeping yet one more surprise up its well-tailored sleeve.