Lowe's, Bank of America miss opportunity to be the good guys

The controversy over TLC's All-American Muslim hits close to home 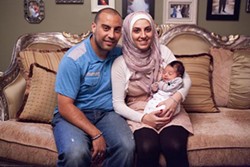 Lowe's and Bank of America's actions during the controversy last week over the TV show All-American Muslim made the two Charlotte-area corporations come off, respectively, as supporters of bigotry and as moral cowards.

It all hit the fan when the Florida Family Association (FFA), a far-right, supposedly Christian group, declared the TLC reality series about five Muslim families in Dearborn, Mich., is "propaganda that hides the Islamic agenda's clear and present danger to American liberties and traditional values." The FFA then announced that its fatwa (not exactly the FFA's term) against All-American Muslim had resulted in 65 companies pulling advertising from the show. The FFA's publicity has turned All-American Muslim into a freedom of speech and religion cause celebre, with a full slate of advertisers and, no doubt, many more viewers.

Lowe's and BofA were drawn into the media brawl when the FFA announced the two companies were among those that had pulled ads. Lowe's confirmed its decision, saying the show "became a lightning rod" for "individuals and groups [with] strong political and societal views on this topic."

Bank of America, on the other hand, was more coy about its decision to back away from the show. After numerous attempts, we finally got BofA spokesman Ernie Anguilla to speak about the controversy, though his initial response was a terse, "We're not commenting on this one." We then asked Anguilla whether the bank's "no comment" was final, in view of BofA's name being bandied about nationwide as having bowed to pressure from a bigoted group. "We purchased a single ad and our airing schedule is now complete," he said, implying BofA had planned to buy only one ad and that the FFA's campaign had no bearing on the bank's decision not to run more. Anguilla has not yet answered our next follow-up question, in which we asked whether BofA had considered issuing a statement distancing itself from the FFA's bigotry.

Meanwhile, Lowe's was taking a public beating for giving in to the FFA. The home-improvement giant found itself targeted by everyone from the tens of thousands of outraged Facebook users to music mogul Russell Simmons. "This country is built on religious freedom," Simmons told Entertainment Weekly. "This is the kind of hate that tears this country apart." Simmons then bought up all the available advertising on the next episode.

The national uproar finally led to Lowe's issuing a mini-backtrack, saying, in essence, that it was sorry if anyone was offended, but not to worry — the company is as committed as ever to "diversity and inclusion." Apparently, Lowe's just doesn't want to be affiliated with diversity and inclusion on television.

The company's revised position was seen by its critics as a stubborn refusal to condemn the FFA's prejudice, and the flames grew higher. A California state senator, Ted Lieu, wrote a letter to the Lowe's corporate CEO, Robert A. Niblock, calling the company's decision "bigoted, shameful, and un-American," and threatening to "encourage boycotts of Lowe's and look into legislative remedies." Pulitzer-winning New Jersey newspaper The Star-Ledger wrote, "for as long as Lowe's continues to 'defer' to discrimination, let's boycott this chain."

Rep. Keith Ellison (D-MN), one of two Muslims in Congress, slammed Lowe's for opting "to uphold the beliefs of a fringe hate group and not the creed of the First Amendment." He called on corporate America "to take a stand against these anti-Muslim fringe groups and stand up for what is right because this is what it means to be an American."

In the middle of the media mêlée, the FFA piped up again with more bigotry: "Clearly this program is attempting to manipulate Americans into ignoring the threat of jihad."

Lowe's then found itself in the crosshairs of one of America's most influential cultural observers, The Daily Show's Jon Stewart, who riffed with correspondent Aasif Mandvi on the irony of the FFA's complaint, which essentially is that All-American Muslim is terrible because it doesn't portray Muslims as terrorists. Ridiculing the FFA's prejudice and Lowe's submission to it, Mandvi deadpanned, "Without the store Lowe's, the jihadists' goal is unachievable, Jon. If you were a Muslim who wants to build a bomb ... sorry, I'm obviously being redundant."

On Wednesday, the day after the initial brouhaha, Jeff Elder, a former Charlotte Observer columnist who later ran social media for Lowe's, posted on his website about the controversy. Saying he has "great compassion for the people" at Lowe's, Elder added that he nonetheless feels the company should not have "clam[med] up and let hate rule the day. I wouldn't have tried to control the message. I would have tried to be a voice of reason." Elder said he was speaking out because "silence in the face of hate is never right. It lets fear-mongering win."

That is an ethical attitude Bank of America would have done well to follow. Even corporate behemoths ought not casually slough off being associated — wrongly or not — with raw, ignorant religious bigotry. Surely being a "good corporate citizen" means, at the very least, that a company does not let itself get dragged into a bigoted group's circle without condemning its hateful beliefs — unless that company is OK with being seen as bigoted.

Elder noted that he grew up in the South and had been exposed to bigotry, "and some of the good people I knew did not speak out to oppose it ... Brave people spoke out against the hate. It was the only right thing to do."

Rep. Chris Murphy (D-CT) said much the same thing on the floor of the U.S. House of Representatives: "[Lowe's] is a major American company rubber-stamping basic foundational bigotry against a major American religious group ... It's one thing when a fringe group or a radical, unhinged pastor is doing it. It's quite another when a fortune 100 company is endorsing this nonsense."

The final irony in this sad saga is that the FFA was lying all along about all the companies it had persuaded to follow its repugnant lead. A variety of large corporations named in the FFA's press releases denied they've pulled ads from All-American Muslim, including Sears, Campbell Soup, the Gap, Green Mountain Coffee, Home Depot, Art Instruction Schools, Amway and Cumberland Packing. Some of those companies also condemned FFA's bigotry. It's too bad two of Charlotte's biggest companies didn't have the fortitude to do the same.