We all know Charlotte is a beer town, and this holiday season offers festive proof. From South End's first annual 12 Brews of Christmas to Olde Mecklenburg's sixth annual Weihnachtsmarkt, beer is creating its own place in our city's traditions.

But our brewing culture has a younger sibling that is eager to join the party. Liquor distilleries offering everything from rustic moonshine to elegant gin have sprung up all over the state, and at least six have set up shop around the Queen City. This October, they all received an early Christmas present, with a new law allowing limited on-site bottle sales. For their proprietors, this could be a first step into gaining the same kind of popular support that their big beer brothers enjoy today.

The North Carolina bill implemented on Oct. 1 allows distillers to sell a single bottle per customer per year — not exactly a recipe for explosive growth. Yet as part of the ongoing trend of eating and drinking locally, makers of craft spirits are excited about this small modification that may allow their industry to snowball into a major player in the state's economy. Under the watchful eye of the state's alcohol commission, they are eager to prove that strong spirits have a place in North Carolina.

Operating in one of the most restrictive states in the country, our nascent distillation industry has developed under different rules than those governing their brewing compatriots. Both have to wend their way through a maze of federal, state and county permits to legalize their operations. However, at the end of that maze distillers encounter excise and other taxes up to 100 times higher than those applied to beer, making margins tighter. In addition, aside from those limited on-site sales, every bottle of distilled spirits produced in North Carolina can only be sold (legally — let's not forget our NASCAR roots) through the state's Alcoholic Beverages Commission — the familiar ABC stores that have controlled strong drink since the lifting of Prohibition.

This system hobbles spirit producers in key ways. Distilleries cannot sell outside of ABC store hours, so that rules out evening and Sunday purchases. Since the warehouse in Raleigh only accepts shipments by the pallet, smaller batches of specialty or seasonal runs are impractical. Even bars and restaurants must also obtain their supplies through the ABC system, which does little to foster local vendor/customer relationships. And while distilleries can pour limited tastes of their products on site, they cannot establish full-fledged drinking establishments akin to the convivial taprooms that have become an important part of Charlotte's culture.

So though small, the recent change in state law is a promising sign of progress. Only two months in, it's difficult to offer real year-to-year comparisons, but local producers have already seen some tangible benefits. Rob and Caroline Delaney of Belmont's Muddy River, one of our oldest modern distilleries at only 4 years of age, have already hired a part-time employee. "We used to just do a couple [of tours] a week," Caroline Delaney says. "Now we're having open hours where you can just drop in for a short tour and tasting." Adds husband Rob, "We hired because of that bill."

Over in Chapel Hill, Esteban McMahan of TOPO Distillery expects the new law to have a widening economic impact. "We didn't want to invest money into the whole distillery store concept until we were sure the bill passed," he says. "I'm pretty positive we'll increase tour times. That will probably force us to hire a couple extra people to run the tours, or at least the store." He says already about 50 percent of visitors now leave with a bottle of locally-sourced TOPO gin, vodka or whiskey in hand. 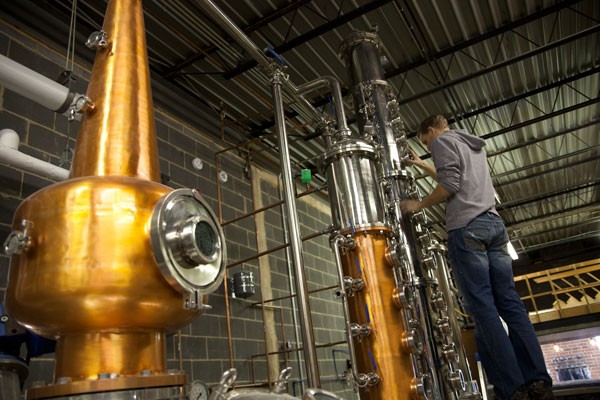 All the distillery owners I spoke with were quick to assure me they had no desire to diminish the role of the ABC system or the revenue of its retail operations. "We have total respect for the ABC system," says Liz Porter of Doc Porter's Distillery in Charlotte's South End, which poured its first tasting of "cleverly crafted" vodka in early November. "We're just happy to get bottle sales," husband and distiller Andrew adds. "Whatever we've got to do, we'll do it."

"The intent wasn't to draw more people to the distillery," TOPO's McMahan explains. "It helps put the spirits in their hands and helps them buying a second bottle at the ABC." Rather than subtracting sales from nationally distributed spirits, the goal is to boost overall sales, benefitting the state as a whole.

"When they look at it from a high level, it's hard for the state to argue against it, because it's a North Carolina product using North Carolina ingredients, selling to people in North Carolina," Andrew Porter says.

It's all part of a broader effort to turn more consumers onto locally distilled alternatives to big name spirits, and to keep drinking dollars in the state. Most North Carolina liquors start from fruits or grains grown here, and McMahan points out that TOPO purchases many related items, from labels on bottles to t-shirts in their store, from local businesses. New job openings and increased tax revenue from rising sales sweeten the economic impact even further.

But while supporting local may improve state finances and warm our hearts, discriminating drinkers may wonder about the appeal of imbibing these upstart alcohols, considering the centuries of experience behind well-known brands of vodka, gin, whiskey and rum. Never fear, for like their big brother microbrews, these craft decoctions offer their own delicious advantages from an early age.

"The very little secret in distillation today is that about 70 percent of distilleries in the US don't make their own alcohol," explains McMahan, saying many redistill or blend others' neutral grain alcohol. And even those that do start from scratch tend to filter out characteristic flavors in their spirits in search of that industrial lodestar of consistency.

Craft distillers, on the other hand, can take the time to tease out a unique taste of place. Both TOPO, one of the state's oldest and largest distillers, and fresh-faced Doc Porter's boast a grain-to-glass process that starts with delivery of wheat from a single, carefully selected North Carolina farm. According to Liz Porter, that creates a distinctive difference in the final product.

"It really maintains this cool character of North Carolina wheat," she says. "It tastes like craft in a great way."

The distillers themselves are a big part of the package, too. Though Muddy River cannot source cane locally for its lineup of five different rums, Rob Delaney says his wife brings an unexpected talent to the table. "Caroline makes us better simply by tasting [our rum]. Her palate is what makes us special." He reports that several visitors have "come out to tell us they're from the Caribbean and that we're doing it wrong." After their tour and tasting, he says, "They leave with their legal limit of rum in their hand."

As might be expected, a shared interest in booze creates a collegial bond among the area's distillers.

They all speak of each other on a first name basis and frequently recommend each others' locations to interested visitors. In Charlotte, Andrew Porter and Rob Delaney have helped each other out in navigating the tax technicalities stemming from their new on-site sales, and all three producers in this story are members of the North Carolina Distillers' Association. At all their distilleries you'll see large posters provided by the guild boasting of a "Craft Distillers Trail" featuring 25 producers across the state.

The promotion of this trail includes a free passport listing participating distillers from the mountains to the coast. Created in collaboration with the NC Department of Agriculture, it is designed after the Kentucky Bourbon Trail. Visitors collect unique stamps at each location, learning along the way how to appreciate the particular characteristics of the state's finest spirits—and hopefully infusing the state economy with tourist dollars.

According to Liz Porter, Kentucky sees tens of millions of dollars in revenue from the Bourbon Trail, and if North Carolina distilleries are allowed to grow into their inheritance, she dreams of a similar future for our area.

"People aren't going to drive to Charlotte to go to Doc Porters for an hour-long tour," she says. "But if there are now eight distilleries and there's this passport program, and we also have these breweries, it could become a real asset for Charlotte and North Carolina."

So slide over on that drinking bench, brewers. Your little sibling is ready to bring its own flavor to the party, and the old saying rings truer than ever: the more, the merrier.

TOPO Organic Spirits The only locally-sourced and certified organic distillery in the deep south, TOPO is also one of the largest in North Carolina. It is part of a greater complex that includes a restaurant and brewery. Tours Thursdays through Saturdays, $20. 505C W. Franklin St., Chapel Hill www.topodistillery.com.

North Carolina Distillers Association Lists links to all its active members and a newsfeed to keep you up to date on all the latest developments on North Carolina’s spirits industry. www.ncdistillersassociation.org.