Mindless Self Indulgence looks to entertain 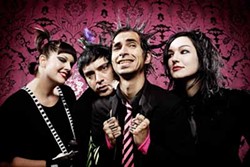 It's not what you would expect from a guy who calls himself Jimmy Urine and has been known to imbibe his own fluids onstage. Calling in from the first leg of his band Mindless Self Indulgence's European tour in Austria, he sounds like a serious, well-grounded guy who just happens to swill his own pee on occasion.

Some would argue that mindless self-indulgence is a perfect description of what most bands engage in. You wouldn't get much argument from Urine (born James Euringer), who has always said that he and his fellow band members hate musicians.

"I consider myself more an entertainer," he says. "I think a musician is somebody who sits around and noodles on a guitar," he says, dropping into a druggy growl worthy of a Cheech and Chong sketch: "Heeeeyyy, man! Check it out -- drum solo -- woooo!" He puts entertainers on a higher plane. "Entertainers are showing you a lot more. It could be anything from Frank Sinatra to KISS, where there's something going on -- a song and dance routine, and I'd rather have that going on than be considered a musician."

Critics didn't know what to call them when they first appeared on the scene with 1999's Tight. Spin called them the Brat Pack, and said their sound was a blend of Korn and the Beastie Boys. "That's kinda small," Urine says. "It's the formula everybody uses to describe us: you take one band, plus another band and then you have to put them on a drug and then in a location like another planet."

He says it's the press taking the easy way out, "to try to understand what the hell we've accomplished, making our own little genre."

But we press folk have to try, so using a variation on the formula Urine alluded to, MSI sounds like Devo covered by The Ramones fronted by a really nasty David Byrne; old school new wave in a head-on collision with speedmetal-flaked punk/funk.

Although they frequently appear with a head-banging hardcore bunch, MSI stay above the fray with their snappy melodies, quirky electronic hooks and twists and a self-deprecating sense of humor. "There's nothing you can do that I haven't already done to myself," Urine warbles autobiographically on "Never Wanted to Dance," from their latest, 2007's If.

Urine set the tone for his self-mutilation fetish early on in his career, setting his jacket on fire and running out in the audience to confront a heckler who had been chucking things at him. "I just want to give you a hug," he told the man, who gave up his heckling career on the spot and fled the building.

The entertainer has always maintained that he's more comfortable when people hate the act because then he knows what to do. In his case, that means going over the top, doing something to himself with fire or fluids or anything else that comes to mind or hand. "Very rarely do you get anybody who's bored by it," Urine says. "We really like the diametrically opposed views."

Ironically, the act that was anti-mainstream was embraced by the mainstream media with 2005's You'll Rebel To Anything, which made Billboard's top 200. Urine says the band didn't do anything differently to attract the attention. "I think we were sitting somewhere way, way in the future and everybody just kinda caught up," he says, laughing.

The attention turned them into headliners and opened up the New York-based band to touring worldwide. But Urine doesn't think they've compromised their integrity. "I think selling out is if you just really change yourself so completely right away to hop onto whatever bandwagon is going on," he says. "It's pretty hard for us, considering our sound is so unique."

That sound and Urine's antics have carried the band for a decade, and the singer says he knows he can't do it forever, but has no retirement date in mind. "Soon as I start to find myself ridiculously boring," he chuckles. Meanwhile, he'll continue to shock audiences and amuse himself waiting for the rest of the world to catch up. "Then," he says, "we'll be more than happy to collect the giant check made out to Mindless Self Indulgence for cash."

Mindless Self Indulgence appears Saturday, Aug. 30 at 8 p.m. at Amos' SouthEnd with Hollowboy and innerpartysystem. Tickets are $17.50.