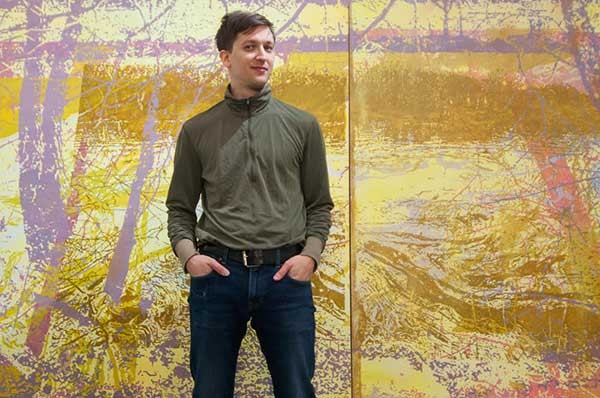 A critic visiting North Carolina native Greg Lindquist's New York art studio recently referred to the colors mixing on his palette as having a "curdling sweetness," and the same could be said for his recent works.

The colors in Lindquist's recent Smoke and Water series swirl on their respective canvasses like oil in vinegar giving way to a piece of bread, but something more sinister is represented here under the surface.

In fact, it was a desire to salvage what has sunk below the surface that inspired Lindquist to begin his work on the series in late 2013. He had been studying the effects on rivers and lakes of nearby coal ash ponds that would sometimes release runoff into the bodies of water or lead to groundwater seepage.

In February 2014, an underground pipe burst at a Duke Energy steam station north of Greensboro and spilled 39,000 tons of ash into the Dan River. In studying the effects of the spill, Lindquist noticed how beautiful the coal ash looked as it swirled atop the water before eventually sinking to the bottom, dragged below by the heavy metals it contained.

His research would inspire Smoke and Water, a years-long series he will continue with his biggest piece yet at the Monroe Crossing mall in Union County this week. Lindquist is welcoming volunteers to join him in painting "Smoke and Water: Catawba," a 70-by-16-foot mural to be painted on a wall of the mall over the span of five days.

The project, like others in the Smoke and Water series, will look to resurface the unsettling binary in which a dazzling scene represents a dark corruption of the ecosystem.

"There's something extremely disconcerting about looking at something that appears beautiful but represents something that's extremely ugly," Lindquist said over the phone from New York before making his way to Monroe. "I think it has to do with ethics and morality, because we generally want things that are beautiful to be good and want things that are ugly to be bad. When we try to cross those wires it creates this jolt and creates this subtle discomfort."

Lindquist was born and raised in Wilmington. He moved to Raleigh at 18 years old and lived there for six years before his art career took him out of town, but his coal ash concerns make it clear that he's still heavily invested in his home state.

Over the last three years he's displayed Smoke and Water installments at the North Carolina Museum of Art in Raleigh, where he worked closely with the museum's Teen Arts Council, and in his hometown of Wilmington, where environmental advocates marched in a procession with his paintings through the streets of downtown in an experience he said will stick with him throughout his life. 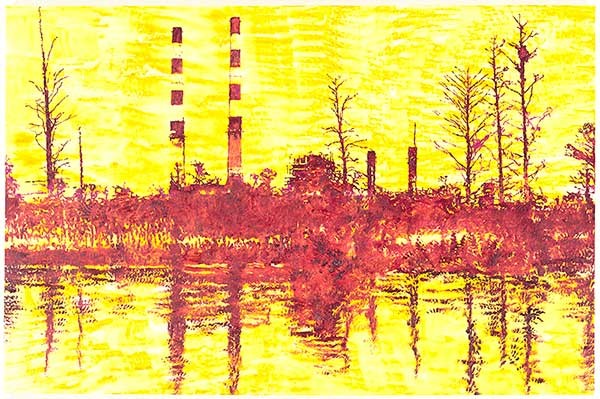 This time, Lindquist is calling on volunteers — be they environmentalists with art experience or simply curious parties who have never lifted a brush — to help him paint the mural, which he hopes will attract viewers and start some dialogue around coal ash.

"There is something that is slightly awry or slightly off about it, and that subtlety that beauty can offer is a really appropriate way to draw people in then allow them to engage with the work on whatever level they feel appropriate," Lindquist said. "The work gives as much as you put into it. That way of using beauty can be a sort of aesthetic Trojan horse. It's something that can bring in this complicated content in a way that doesn't make the decision for you, it doesn't draw the conclusion for you, but allows you to figure it out on your own." 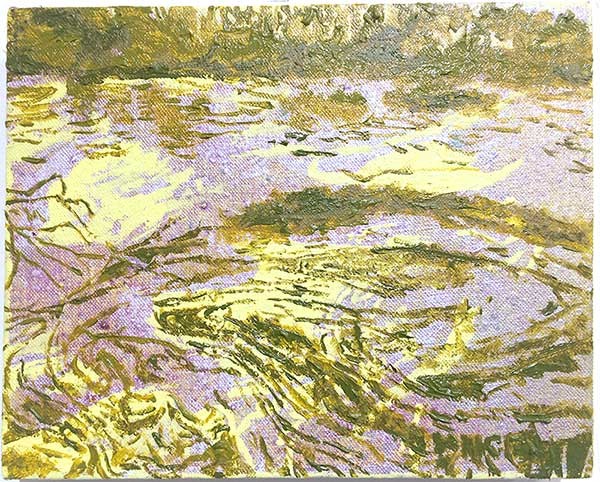 Art-In-Buildings (AIB), which is funding the project, is a program run by Monroe Crossing's property owner Time Equities, Inc. that aims to expand the audience for contemporary art and artists by adorning the company's properties with the work of emerging and mid-career artists.

Jennie Lamensdorf, a curator with AIB and project organizer for "Smoke and Water: Catawba," had already known Lindquist, as they've crossed paths in New York's art scene. She thought of him when she visited Monroe in April 2016 to visit the site and begin planning the new installation.

Lamensdorf usually does a lot of research to find the right artist for a site, but with her awareness of Lindquist's work and his familiarity with an area that's been heavily affected by coal ash, she said the decision became clear almost immediately.

"I asked around and said, 'Is there a river here that's impacted by the coal ash?' Actually there is: the Catawba River," Lamensdorf said. "It was one of those kismet moments, I have to say. It's not usually this easy. It was one of those magic, unusual things where everything lined up and it made so much sense." 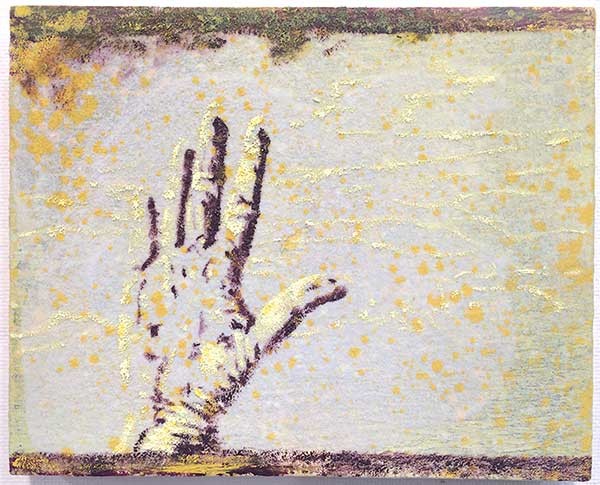 The Smoke and Water project is a first for AIB in that it will not be in an office environment or apartment building, where folks are usually too focused on their daily goings-on to truly appreciate the art. Lamensdorf calls most AIB projects "semi-public," meaning that the public is welcome to view them, but the chances of people coming into an office building to do so are slim.

"The mall is truly a common area, it's a truly open public space where anybody is welcome. So I think we're going to get a much broader audience, a much different audience," she said. "We're engaging people in their leisure time as opposed to in their work or home."

It's another first for AIB in that Lamensdorf and Lindquist are inviting the community not only to view the art but also to help create it. Between Wednesday and Sunday, they will be holding community mural painting days, during which any volunteer is welcome to help paint in specific colors based on a projection of Lindquist's original study on the wall.

Lindquist has done similar interactive mural projects before and said that, even if it seems like simple paint-by-numbers, it gets much more complex in a project so large.

"What I'm particularly interested in is this idea of physicality; of different people's hands being involved in this one unified, coherent image. You have lots of different senses of touch, with people's hands and the ways that they use the brush that comes together in a beautiful way," he said. "That's something that I've enjoyed to see come together in these murals. You can only direct people to a certain extent and then after that the mural takes shape by the way that people who are involved execute it." 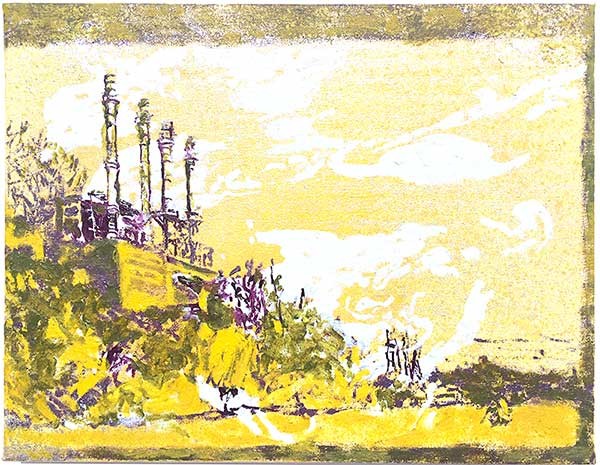 What's new for Lindquist is the open nature of the project. During his last volunteer-based mural at the North Carolina Museum of Art, he worked with members of the Teen Arts Council behind closed doors until they were ready to unveil it to the public. This time, he'll be engaging with the public directly while directing volunteers on when and where to paint. He's looking forward to simultaneously working to educate those actively participating and those more passive bystanders who may just be curious as to what's going on.

"The real challenge here is how to work in a public space and negotiate those boundaries with the space that you need to make a mural," Lindquist said. "It also adds another layer of pressure. How do you maintain the enthusiasm and the energy of the volunteers while also interacting with and having conversations with the public? Then they get excited and some people will come back and help and some people will tell other people and that's just the way you want people to get energized for creating something like this."

Lamensdorf is encouraging teens to come out all day Saturday and families to participate on Sunday afternoon, but she stressed the fact that anyone is welcome to join at any time during community painting hours.

What's not a first for AIB is the group's willingness to engage a political subject in an aesthetically beautiful way in an attempt to kick off dialogue on the subject. Lamensdorf recalled a similar project she organized in 2015 in which South African artist Frances Goodwin used acrylic fake fingernails to create an installment that made a statement about the politics of the beauty industrial complex.

Lamensdorf said that project was effective in how the beautiful, bright colors drew people in and began a conversation about feminism. She's optimistic that "Smoke and Water: Catawba" can be similarly successful.

"I think that one of the most critical roles of contemporary art is its ability to speak about things that are really hard to talk about otherwise," she said. 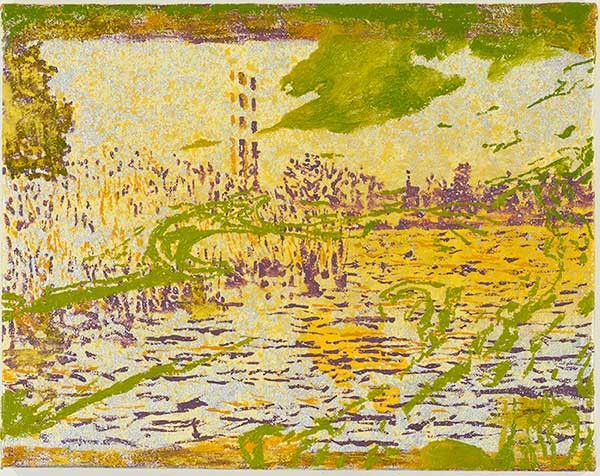 Art can be a way to begin a conversation that can either be seen as too boring or too uncomfortable to start in other settings, Lamensdorf said.

Lindquist agrees, and said that regardless of one's positions on the issue, speaking about it is the most important part.

"That's one way in my mind that art has a distinction between activism. With activism, you're very much going after one outcome. You have an outcome in mind and every move you make is going toward accomplishing that outcome," he said. "Coal ash is a really complicated issue. There's not one grand pronouncement of a solution. But I think it's all of our duties and obligations as citizens to be educated about it and to pick a position and to act if you feel appropriate to act — and I think it is appropriate to act. As an artist that may be my primary goal."

The creation of "Smoke and Water: Catawba" will be just the beginning of a multi-phase project Lindquist hopes to carry out at the mall in the coming year. His goal is to implement a monthly or bi-monthly speaker and film series in which coal ash experts and those most affected by the coal ash ponds that dot the banks of the Catawba can share their stories.

He's been in talks with Coal Ash Chronicles founder and CL contributor Rhiannon Fionn and Catawba Riverkeeper Sam Perkins about holding these meetings in one of the unoccupied storefronts within Monroe Crossing Mall.

"North Carolina is the most particularly interesting case for collusion between the industry and state government, and with the new administration that's getting ready to come into office, I'm very scared about what can happen with something as important as the Environmental Protection Agency," Lindquist said. "I think it's really important to make these issues acceptable and to make them physical and to provide people with a contemplative and meditative space that painting and the visual arts allows for."

But before all that can take place, Lindquist has a long week of work ahead of him, and he's hoping you'll be there to help him out.