Rashomon, Savages, The Watch among new home entertainment titles | View from the Couch | Creative Loafing Charlotte
Switch to the mobile version of this page. 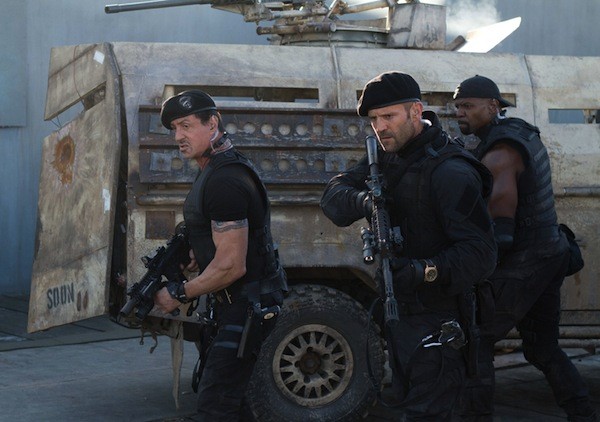 THE EXPENDABLES 2 (2012). The best thing about The Expendables 2 involves Chuck Norris. I don't mean his performance — he's as awful as ever, showing less range than a mattress pad — but rather that his character manages to work in one of those popular "Chuck Norris Internet facts" that have led to his renewed popularity (e.g. "Chuck Norris drinks napalm to quell his heartburn"; "Chuck Norris counted to infinity ... twice"). I won't ruin the Norris "fact" used in the film, but it provides one of the few genuine laughs, and it's certainly better than the forced wisecracks centering around the iconic figures formerly played by co-stars Sylvester Stallone, Bruce Willis and Arnold Schwarzenegger. A marginal improvement over the first Expendables romp, this sequel offers expanded roles for Willis and Schwarzenegger (whose appearances in the first film amounted to nothing more than cameos), casts another '80s action star as the villain (Jean-Claude Van Damme as ... groan ... Jean Vilain), and, perhaps in a dubious attempt to expand the audience beyond action-crazed young males, adds group newcomers in the form of a pinup heartthrob (The Hunger Games' Liam Hemsworth) and a kick-ass woman (Nan Yu). The team's mission is twofold: Stop Vilain from using his plutonium supply to conquer the world and exact their revenge on said villain for murdering one of their own. Director Simon West's action flicks tend to be cluttered, choppy affairs (Lara Croft: Tomb Raider, Con Air), and The Expendables 2 is no exception. As the team leader and his right-hand man, Stallone and Jason Statham awkwardly exchange male-bonding barbs. One of the franchise stars appears only at the beginning, leaving audiences to wonder if he was downed by pneumonia for the rest of the shoot. Schwarzenegger, whose Botoxed mug makes him look like a CGI creation, lamely tries on Willis' signature "yippee-ki-yay" and finds it to be an ill fit (Willis fares better with Arnie's "I'll be back"). And so it goes. The movie is, at best, average as a straight-up action flick and subpar as an action spoof, but it succeeds in one regard. Conservatives still upset over the pounding the GOP took on Election Day can rent or purchase the film in the hopes of obtaining catharsis of sorts: Watching diehard right-wingers Willis, Schwarzenegger, Norris and Stallone shooting up everything in sight, one can easily imagine both the anti-Obama cracks and pro-NRA comments that were doubtless being tossed about when the cameras weren't rolling.

Blu-ray extras include audio commentary by West; deleted scenes; a look at '80s action flicks; a featurette on the weapons seen in the film; and a gag reel. 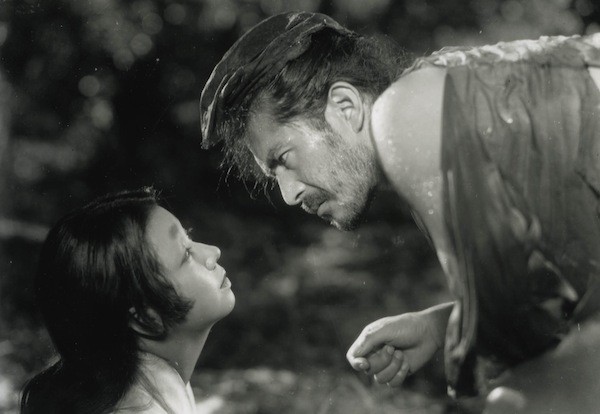 RASHOMON (1950). Akira Kurosawa was hardly a novice when he directed Rashomon — he had been working in various capacities in the business since 1936, and had already helmed 11 pictures since 1943 (including the superb Stray Dog) — but it wasn't until this cinematic masterpiece nabbed the Golden Lion at the Venice Film Festival (and, subsequently, an honorary Oscar for Best Foreign Language Film) that he became an internationally renowned filmmaker, a prominent standing that allowed the entire Japanese film industry to finally enjoy the global spotlight. In many ways as groundbreaking and daring as Citizen Kane in its thematic content and technical achievements, this treatise on the malleability of truth stars Kurosawa regular Toshiro Mifune as a bandit who encounters a married couple (Machiko Kyo and Masayuki Mori) while traveling through a dense forest. In time, the husband is dead, the wife has possibly been raped, and a woodcutter (Takashi Shimura) might have witnessed the event. The incident is recounted by four different people — the bandit, the wife, the woodcutter and even the ghost of the slain husband — yet which, if any, of the conflicting versions is the right one? Rashomon led to a direct remake — 1964's indifferently received The Outrage, with Paul Newman as the (now-Mexican) bandit — but its influence of course extends far beyond that, with the unique flashback structure since employed in countless films, the technical innovations (among other things, this was reportedly the first film to shoot the sun straight on) borrowed just as much, and even the title itself entering the lexicon (the psychology term "the Rashomon effect").

SAVAGES (2012). The voice-over narrator of this nitwit claptrap is Ophelia (Blake Lively), who long ago shortened her name to O to avoid comparisons to Shakespeare's tragic heroine. Not coming across as particularly well-read, O doubtless did not realize that she now shared her name with the title character from Anne Desclos' controversial Histoire d'O (The Story of O), the erotic tale about sadomasochism. This new designation makes more sense, however, since Savages' characters practice sadism in their dealings with one another while viewers have to be masochistic to sit through this torturous affair. Taylor Kitsch and Aaron Johnson play Chon and Ben, two California dudes responsible for cultivating the best marijuana in the entire world (America, fuck yeah!). Their wacky weed is so awesome, in fact, that a Mexican drug kingpin — uh, queenpin? — named Elena (Salma Hayek) insists on merging their operations, a proposal the boys shoot down. This displeases Elena, so she sends her top enforcer, Lado (Benicio Del Toro), to kidnap the boys' shared lady love, O, in an effort to force them to cooperate. O no! How will the bad-ass Chon manage to chill long enough to formulate a sensible plan? How will the Buddha-spouting, go-green Ben be able to channel Rambo long enough to kill when necessary? And, most importantly, when did John Travolta's noggin take the shape of a bowling ball? Yes, Travolta's in this turkey, as a cheerfully corrupt DEA agent playing both sides. He's far more engaging than the three youthful leads, as are Hayek and Del Toro (even if the latter's character comes off as a poor man's Anton Chigurh). Savages is based on the novel by Don Winslow, who co-wrote the screenplay with Stone and Shane Salerno. It should be noted that no less than Michael Bay once called Salerno's work on the script for Armageddon "brilliant." Coming from a filmmaker like Bay, that's mighty worthless praise indeed. At any rate, not having read Winslow's novel, it's difficult to ascertain who deserves the lion's share of the blame for not only the atrocious cop-out ending that invariably leaves viewers groaning but also the ghastly dialogue that dogs the picture every time O feels the need to share her inner monologues. Viewer agony begins right near the start, as she describes her boffing sessions with the battle-scarred Chon: "I had orgasms; he had 'wargasms.'" Yow. Haven't Writers Guild of America memberships been revoked for less?

The Blu-ray contains both the R-rated theatrical version and an unrated edition. Extras include audio commentary by Stone; separate commentary by Winslow, Salerno and other key personnel; a five-part making-of featurette; and deleted scenes. 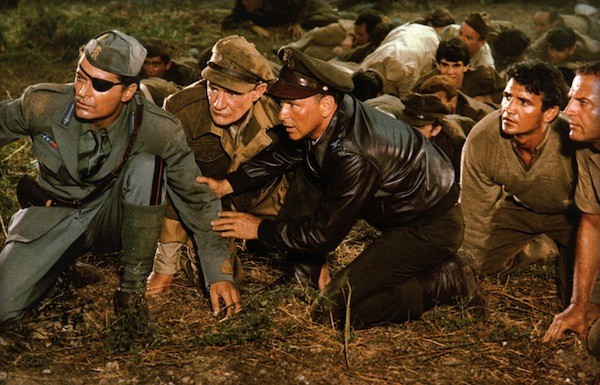 VON RYAN'S EXPRESS (1965). While hardly the cream of the 1960s crop of rip-roaring World War II adventure yarns — in other words, it can't begin to touch The Great Escape, The Guns of Navarone or Where Eagles Dare — Von Ryan's Express nevertheless qualifies as choice escapist fare, the sort best watched on a lazy Saturday afternoon when it's just too hot/cold/rainy/what-have-you to venture far from the couch. Frank Sinatra, typically solid (he remains an underrated dramatic actor, Oscar for From Here to Eternity notwithstanding), stars as Colonel Joseph Ryan, a POW whose initial efforts to cooperate with his German captors earn him the nickname "Von Ryan" from the other prisoners. But once the POWs are herded onto a train headed for another internment camp, it's Ryan who leads the revolt against the Nazis, taking over the train and steering it toward Switzerland and freedom. Many fine vignettes make up this popcorn picture, culminating in a ferocious battle on an Italian mountainside where the train's occupants must defend themselves against strafing German airplanes. The cast also includes Trevor Howard as the senior British officer, a young James Brolin in his first credited screen role, and Adolfo Celli, who was also appearing as the villainous Largo in the same year's 007 outing Thunderball.

Blu-ray extras include a retrospective piece; a featurette on Hollywood war flicks; an appreciation of the late, great composer Jerry Goldsmith, who scored this picture; and an isolated score track. 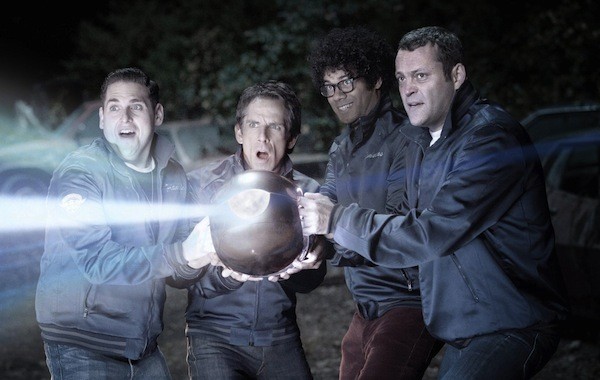 THE WATCH (2012). After The Watch flopped hard at the American box office, it was suggested in more than one circle that this comedy about the members of a neighborhood watch was the victim of horrible timing: It debuted in theaters five months after the shooting death of Trayvon Martin at the hands of George Zimmerman, and its original title of Neighborhood Watch was even changed specifically because of the Florida tragedy. It's a sound theory, but the greater truth is doubtless that the movie tanked because it's frequently terrible. After the night watchman (Joe Nunez) at an Ohio suburb's Costco gets brutally murdered, the concerned manager (Ben Stiller) takes it upon himself to form a citizens' outfit to routinely patrol the area. The only volunteers — one cheerful (Vince Vaughn), one meek (Richard Ayoade), one potentially psychotic (Jonah Hill) — are more interested in hanging out and drinking beer than in protecting the streets, but that changes once they learn that the mayhem is being caused by outer space invaders. A few modest chuckles save this from being a complete bomb, but the script's dissimilar elements never manage to coexist peacefully (subplots involving sterility and teen sex are ill-formed and crash against the equally dull e.t. framework), and the actors aren't taxed enough to break a sweat — Stiller, Vaughn and Hill are regurgitating past portrayals, while The IT Crowd's Ayoade makes little impression on the big screen. At least the expected Viagra cracks are kept to a bare minimum (just one), although Trojan Magnum condoms — large size, of course — receive a few shout-outs during some of the penis-obsessed exchanges. 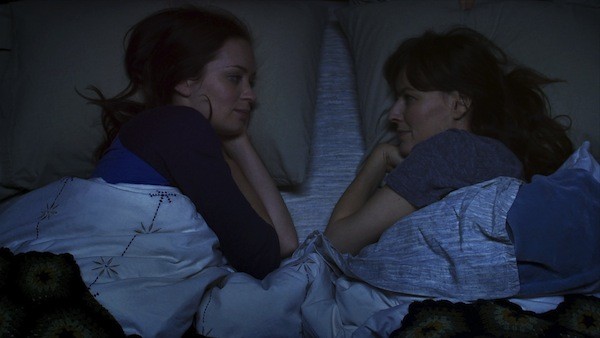 YOUR SISTER'S SISTER (2012). The dialogue in Your Sister's Sister is so natural, flowing and unforced that it's a wonder audience members don't frequently call out the makers of other movies for penning lines that sound as if they could only have come from a screenwriter's keyboard. It isn't that there's anything wrong with sentences built with a more fanciful spin — heck, I could listen to Coen-speak all day long — but there's nevertheless a special satisfaction in hearing characters talk as if they just had arrived on the screen from the coffee shop adjacent to the movie theater. Writer-director Lynn Shelton gets much of the credit, of course, but so do her lead performers, all asked to improvise as filming took place. The result is a disarming picture in which Jack (Mark Duplass), trying to get his life in order following the death of his brother, takes the advice of his best friend Iris (Emily Blunt) and heads off to her family's isolated cabin for some quality alone time. He's surprised to find Iris' lesbian sister Hannah (Rosemarie DeWitt) at the cottage, but they quickly get acquainted, downing hard liquor together and partaking in an ill-advised fling — one made all the more unfortunate with Iris' arrival the next day. The characters are more believable than the occasionally schematic plot, but Shelton and her cast (especially the two actresses) deserve credit for creating people who are alternately endearing, off-putting, intelligent, idiotic, sympathetic and frustrating — in short, people like us.