Reviews of new DVD releases | View from the Couch | Creative Loafing Charlotte
Switch to the mobile version of this page. 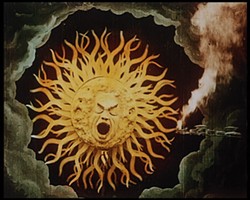 THE BRIDGE ON THE RIVER KWAI (1957) / LAWRENCE OF ARABIA (1962) / A PASSAGE TO INDIA (1984). To celebrate the recent 100th anniversary of David Lean's birth (the great director passed away in 1991), Columbia Pictures has seen fit to re-release three of his staggering epics on DVD.

Set in the Burmese jungles during World War II, The Bridge on the River Kwai depicts the battle of wills between two strong adversaries: Colonel Saito (Sessue Hayakawa), the POW camp commander who orders the prisoners to build a bridge that will be of great value to the Japanese, and Colonel Nicholson (Alec Guinness), the British officer who refuses until he realizes that such an exercise will be a great morale booster for his men as well as an example of superior English handiwork. Of course, what the myopic Nicholson doesn't consider is that he's in effect aiding the enemy, thereby requiring Shears (top-billed William Holden), an American who escaped from the camp, to return as part of an outfit assigned to blow up the structure. The tense climax is a perfect marriage of editing and camerawork. Nominated for eight Academy Awards, it won seven (only Hayakawa lost out), including Best Picture, Director, and Actor for Guinness (although non-nominated Holden is no less memorable).

Lawrence of Arabia has long been regarded in countless camps as one of the greatest motion pictures ever made – for starters, the American Film Institute ranked it #5 on their Top 100 Films list in 1997, and no less than Steven Spielberg has stated it's the movie that most inspired him to become a filmmaker. Certainly, it gets my vote for containing – with apologies to 2001: A Space Odyssey's bone-into-spaceship – cinema's best jump cut (when Lawrence blows out a match and we're instantly transported to the desert), and Peter O'Toole's star-making performance is simply astonishing. He plays British adventurer T.E. Lawrence, a World War I officer who becomes a hero to the Arab people for leading them in battle against the Turks. He finds allies in Sherif Ali (Omar Sharif, whose first appearance is unforgettable) and Auda Abu Tayi (Anthony Quinn), but over time, his status diminishes as he's overtaken by fatigue and his own set of demons. The second half of this restored, 227-minute cut isn't quite as compelling as the first, but to paraphrase a comment I once heard regarding another film: The first half is pure perfection, and then it devolves into one of the best movies ever made. Nominated for 10 Academy Awards, it won seven, including Best Picture and Director (O'Toole lost to Gregory Peck's formidable turn in To Kill a Mockingbird).

Lean's last completed film before his death – and his first movie since 1970's Ryan's Daughter – was A Passage to India, a sumptuous adaptation of the novel by E.M. Forster. In colonial India, the stiff-upper-lip Brits keep a safe distance from the locals, relying on them for manual labor but steering clear of any personal relationships. The exception is professor Richard Fielding (James Fox), who counts among his friends Dr. Aziz Ahmed (Victor Banerjee). The affable Dr. Aziz is further delighted when two open-minded Englishwomen, the elderly Mrs. Moore (Peggy Ashcroft) and her young charge Adela Quested (Judy Davis), arrive eager to explore the "real" India, but a mishap further strains Indian-British diplomacy and places Dr. Aziz on trial. Nominated for 11 Academy Awards (including Best Picture and three nods to Lean for Director, Adapted Screenplay and Film Editing), this copped two Oscars: Best Supporting Actress for Ashcroft and Best Original Score for Maurice Jarre (who won two previous Oscars for Lean's films Lawrence of Arabia and Doctor Zhivago).

The DVDs for the first two titles contain the same extras that appeared on earlier editions (primarily making-of documentaries and short featurettes), but A Passage to India comes equipped with new material. This includes audio commentary by co-producer Richard Goodwin, various making-of pieces, and a discussion of Forster.

GEORGES MÉLIÈS: FIRST WIZARD OF CINEMA (1896-1913). The story goes that Georges Méliès, a magician who saw the potential of the new medium of cinema when it debuted at the end of the 19th century, was out filming a bus when his camera jammed. He got it working again just as a hearse was driving by; thus, when he later watched the footage, he was stunned to see the bus magically turn into a hearse. With this simple accident, Méliès discovered that movies could do more than simply record everyday occurrences – they could also tell fantastic stories through trailblazing techniques such as special effects, fade-outs, double exposure and fast motion. Over a 17-year span, Méliès made well over 500 films (the exact number is unknown, since many have been lost over time), and this splendid box set – a must-see for anyone seriously interested in cinema, or simply looking for a good time – contains 173 movies spread out over five discs. Most of the titles run only a few minutes, and the "epic" in the set clocks in at 30 minutes, bringing the collection's total length to 13 hours. It's (over)time well spent, as the package contains countless pictures that showcase their creator's eagerness and ingenuity (no less than D.W. Griffith, the so-called "father of film," stated, "I owe him everything"). Of course, the set wouldn't be complete without Méliès' most enduring triumph, 1902's delightful A Trip to the Moon, but other acclaimed works, like 1904's The Terrible Turkish Executioner (I love this one!), 1906's The Merry Frolics of Satan and 1912's The Conquest of the Pole, are also included. From giant bed bugs to human flies, from Cinderella to Baron Munchausen, from moon men to underwater explorers, Méliès went wherever his imagination led him. Prepare to be astounded.

The only extra is a half-hour 1953 movie that recreates Méliès' life (his wife, Jeanne d'Alcy, plays herself, while Méliès is played by his son André). The set also contains a 36-page booklet that contains two essays as well as a helpful filmography of all the titles included in the collection.

27 DRESSES (2008). 27 Dresses is the filmic equivalent of a baby: cute, pampered, craving attention, and somewhat smelly thanks to all the formula passing through it. A rom-com that dutifully follows down the genre's preordained path rather than ever take off on its own, this casts Katherine Heigl as Jane, a perpetual bridesmaid who (as the title hints) has attended 27 weddings in that capacity. Jane feels that it's payback time – that she should land her own man and her own wedding – and she's long been pining over her boss George (Edward Burns). But he's never shown any interest outside of their business relationship, and once her perky, irresponsible supermodel sister (Malin Akerman) breezes into town, George is hopelessly smitten. Nice-girl Jane refuses to interfere, even though she knows her sister and her boss aren't right for each other; she's also frequently distracted by the unwanted advances of the cynical Kevin (James Marsden), who she knows to be a writer but doesn't realize that – get this – he's the one who pens the heartwarming newspaper wedding columns that she clips out with religious devotion. Director Anne Fletcher and writer Aline Brosh McKenna offer a couple of modest examples of plot tweaking, but for the most part, this is so clichéd that it even includes the standard scene in which our drunken leads persuade an entire bar of people to join them in singing along to a pop hit. In this case, the tune being played is Elton John's "Benny and the Jets," but a more apt selection would have been The Four Tops' "It's the Same Old Song."

DVD extras include three deleted scenes, a making-of featurette, and a short piece on "The Running of the Brides," an annual event (for 60 years now) at a New Jersey store where brides-to-be can buy wedding dresses at slashed rates.