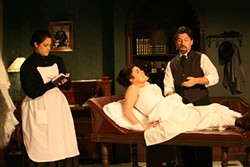 When you don't have a clue about sex, it can be pretty funny — and pretty sad. In her provocative sex comedy, In the Next Room, or The Vibrator Play, now at Actor's Theatre, Sarah Ruhl amps up the ignorance to mind-blowing proportions. To accomplish this, Ruhl takes us back to the 1880s, when only a few houses have been electrified even in a ritzy New York spa town, "perhaps Saratoga Springs." At that time in that place, a respected physician doesn't realize that clitoral stimulation or the "paroxysms" delivered by his wondrous new electronic medical device to treat hysteria have anything to do with sex.

Obviously, the women in Dr. Givings' life are even more in the dark.

With her keen attention to detail, Ruhl coaxes a series of hysterical incongruities out of these highly proper, highly corseted doctor-patient and husband-wife relationships. One minute, Dr. Givings is meticulously shielding himself from the sight of his patient, Mrs. Daldry, as she strips down to her ample underwear. The next, he is applying his marvelous tool down there, bringing Mrs. Daldry to ecstatic climax while imperturbably timing the treatment with his pocket watch.

Displaced modesty also infects Givings' wife along with his pioneering patient. Catherine Givings cannot produce enough breast milk for her newborn baby, so the couple hires the Daldrys' housekeeper as a part-time wet nurse. But when she catches wind of the wonders her husband is working in the next room, she begins to covet Sabrina Daldry's affliction. After stealing into the doctor's office and sampling the treatment, Catherine compares her impressions with Sabrina. Later they're still puzzling out the sensation and asking Elizabeth, the black wet nurse, what it might be. When Elizabeth gently suggests that these are sensations she recognizes from intimate moments with her husband, the two women laugh out loud! Substantiating her skepticism, Sabrina soon grants us a description of what passes for coitus in the Daldry household.

After these hilarious fireworks have been detonated, Catherine and Sabrina continue on their separate voyages to self-discovery. Catherine's lack of lactation kindles doubts of both her womanhood and her worthiness as a mother. She off-handedly remarks that she doesn't know what kind of person she is before her first sexual shake-up galvanizes her to find out.

We're rather fortunate to have Hanley Smith as Catherine, for the Davidson College grad makes us care. Under the direction of Ann Marie Costa, Smith may be a little too Lucy Ricardo for a proper Victorian wife, but I found it easier to empathize with her aspirations than those of Laura Benanti, who typified the Broadway production as Catherine, bringing enough starch to the stage for a Henry James novella. Similarly, I am more captivated by Sabrina's inner turmoils when Lauren Dortch Crozier renders Mrs. Daldry's two very different revelations, one in each act. Act 2 brings the sad part.

Christian Casper gives us a sunnier Dr. Givings than we saw from Michael Cerveris in the Broadway version, placing more emphasis on the searching, inventive side of the physician while muting his kinship with Torvald from Ibsen's A Doll House. On the other hand, Tanya McClellan is far more proper and dignified than her Lincoln Center counterpart as Elizabeth, appropriately wary of the white folk.