On to the next note

As Autumn Millner and Summer Windham sit together in a Creative Loafing conference room on a Friday afternoon, it's easy to imagine what it must have looked like in the Spanish class they met in during sophomore year at East Mecklenburg High School in 2006. 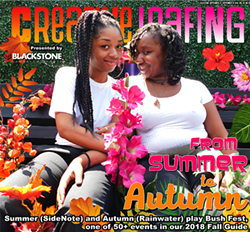 The two have just finished a photo shoot for the cover of this year's Fall Guide, and they're giggling together as they recall how they were sort-of-kind-of enemies during freshman year, cutting off and correcting each other between laughs. Of course, the faux rivalry was over a boy.

The story is something straight out of Mean Girls: Windham was seeing a boy who was also rumored to have a crush on Millner. Word eventually got around to Windham, which led to rumors that Windham was upset with Millner.

"So I was like, 'Well why doesn't she come talk to me about it then?'" Millner recalls, laughing. "And so we would just stare at each other during lunch."

Windham insists she knew nothing of the drama, all she knew is she was being side-eyed by a fellow freshman in the cafeteria.

"She would just be mean-mugging me," says Windham, playing the victim. "I was just like, 'I don't know even know you. I think you're beautiful. Why are you looking at me? Whatever.'"

Despite the rocky start, the two finally had a chance to speak to each other as sophomores in Spanish class and quickly became close friends. They lived like sisters for a summer, during which Millner had her own bed in Windham's room. They even learned that they shared an extended family, as Windham's uncle had fathered a child with Millner's cousin.

Fast forward a dozen years: Windham, a hip-hop artist who performs as SideNote, and Millner, known locally as singer Autumn Rainwater, are key parts of a burgeoning hip-hop and R&B scene here in Charlotte. The two recently played together during a female talent showcase at Snug Harbor called For The Love of She, and will share a bill again for the upcoming Bush Fest at the Shed Ampitheater on Oct. 6. 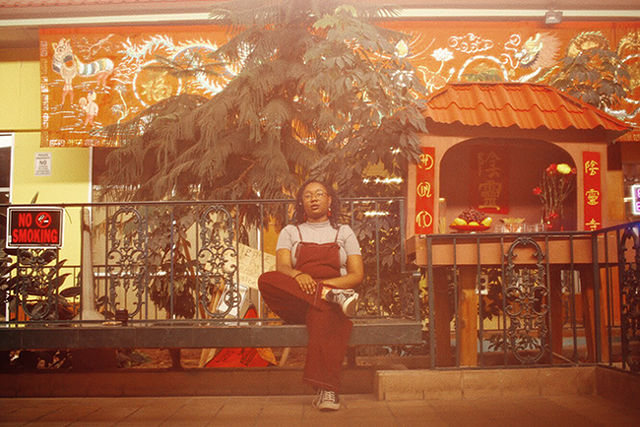 It will be Windham's third festival of the year — on April 21, she played the New Era Music Fest in north Charlotte, then the BOOM Charlotte festival in Plaza Midwood the next day.

She looks back fondly on the trial by festival fire.

"That weekend, I was like, 'OK, here it goes. Let's see how you like this,'" she says. "But it was a lot of fun. I like that larger scale. I love the bigger stage, being able to use the stage a little more. The feeling of it is just bigger and it makes me feel better about my set."

Windham's momentum has only been growing toward bigger things since last year's release of her debut album, MR. The project was a follow up on her first release, an EP called Pass the Ketchup, which she dropped in 2014. 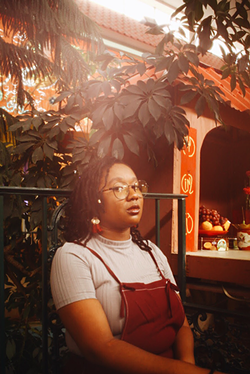 Before all that, Windham was just a kid listening to hip-hop in the kitchen with her mom, Willetta Wallace, a diehard hip-hop head who worshipped Eric B. & Rakim, Run DMC, Slick Rick and the like. Wallace's cousin Bobby would make beats for her to rap to, and even though those raps never made it out of the kitchen, they inspired her daughter.

"She would be in the kitchen blasting those beats and running her verses and I would just see her, and it always made me happy," Windham says. "Hip-hop was just always in the house. My mom showered me with hip-hop."

Throughout her childhood and after graduating high school, Windham stuck to poetry over rap. She wrote as Poet Free, and recorded a project called The Relationship with producer Marc Mangra, who would later produce "Seep" on MR.

The Relationship featured Windham's spoken word over beats by Mangra, and despite the next logical step, Windham stayed away from making hip-hop for a while.

"I was a poet. I always wanted to rap, but I was just like, 'I'm not like everybody else.' Why did I think like that?" Windham asks to nobody in particular, although Millner immediately answers. 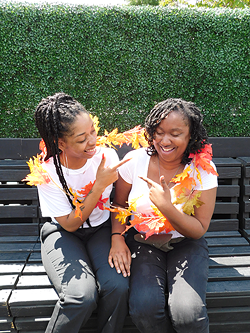 "I really don't know," Millner says, shaking her head as if disturbed by all the time Windham lost by doubting herself. "But I sat there through all of this."

Eventually, Windham began writing raps here and there, just messing around, spitting bars for friends. Then she finally decided to lay down a verse on the record.

In 2010, Windham joined Millner, local poet Sir Abstraxxx and others on a remix of Pete Rock and CL Smooth's "They Reminisce Over You (T.R.O.Y.)." Windham says she recently heard the song, though she refuses to link me to it, because it still makes her cringe.

"The first line is like, 'Take that out, I can't understand you with that dick in your mouth,'" Windham recalls, while Millner laughs hysterically. "That was my first line and I'm like, 'Whhhhyyyyyy was I that person?'"

She kept at it, and eventually was able to smooth out those rough edges, but it wasn't easy. 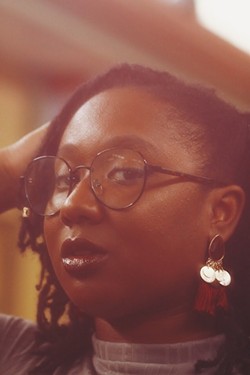 "When I wrote poetry, it just flowed out. Melodies flowed out, too, but for me I was so stuck in writing that I was forcing it. It was hard to me," Windham says. "And then it just kind of made sense. I just kind of got out of my head and took a step back and said, 'What do you want to say? How do you want people to feel? How do you want to feel when you're done with this?' And I just got to a point where I don't force it anymore."

One of Windham's coworkers at the time, Thomas Sizemore, started bringing her to shows at Snug Harbor, where she met up with other members of the Spooky Cozy Collective, which included Sizemore's Dinner Rabbits, Hectorina, Bless These Sounds Under the City, Katya Harrell and others.

Windham's first performance as SideNote was with the Spooky Cozy Collective at their home base, The Shouse, aka The Shithouse, a home the collective used to throw house parties in near Manifest Discs in southwest Charlotte.

Windham felt at home among the lava lamps and mannequins in The Shouse basement.

"It was very intimate, but there were a lot of people there for the basement not being that big," she recalls. "But it was very awesome and it was very welcoming."

One of Windham's earlier recordings as SideNote was a song called "Business" with Hectorina and Dinner Rabbits. The song is a perfect preview to Windham's laid-back, old-school flow, the inspirations of her favorite group, A Tribe Called Quest, apparent throughout as she rides the beat of the band behind her.

She only improved on that flow as she practiced it perfectly over the more traditional hip-hop beats featured on Pass the Ketchup, and then continued to round it out on MR, which featured a little more singing, another passion of Windham's.

"I think Summer's style is mellow but it's strong," says Millner. "It definitely has that hip-hop undertone always, but even when she's singing, it's the perfect contrast of soft and delicate, but hard."

Fans will get a peek at any new progression by the end of this month when Windham drops her newest single, "Unavailable," produced by local producer AMWA, or A Man With Antlers, who collaborated on local rapper Phaze Gawd's latest project, Dark Dreams.

Windham has already filmed the visuals for the song, and plans to drop those along with the single in preparation for Bush Fest, where she will join with the new collective she's been collaborating with over the last year. 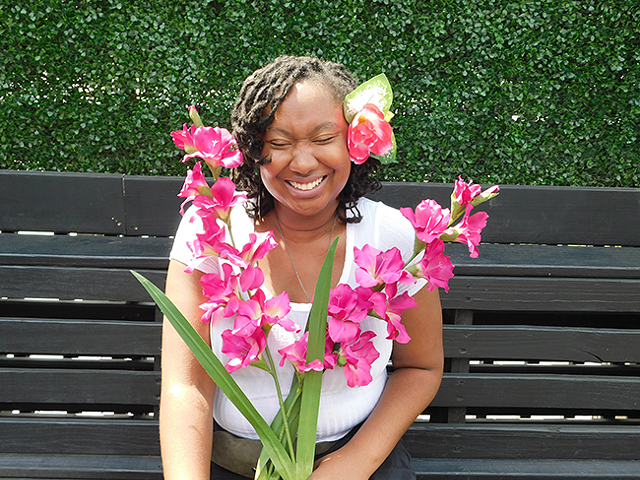 Joseph Fedrick, who performs as local rapper Seph Dot, founded The Bushes collective with Quan Peaks, aka Blk Doggy, who will perform at Bush Fest, and two others about a year and a half ago. Originally from Raleigh, Fedrick aims to make The Bushes a statewide coalition of creatives centered on positivity and open-mindedness.

Fedrick says Windham was one of the first artists he collaborated with after moving to Charlotte four years ago, and he still calls her his "spirit animal." In October 2017, the two released "Palm Waves," a languid hip-hop lullaby on which Windham sings the hook.

"When I first saw her, I thought she was totally amazing and she hasn't let me down yet," Fedrick says. "She continues to progress. Even doing recent songs, she continues to push the envelope and approach things in a new way. I love to see her come out of her shell."

After dropping the mixtape at the end of this year, Windham will focus on her next full-length, a dance album she wants to release in 2019. But before the dancing, she'll be showing off that singing voice on her new mixtape, as she continues to expose her bevy of talents.

"I'm very excited about [singing more], because I've been really shy, but now I'm just kinda like, 'You know what, I'm already here, so let's do this,'" Windham says. "I did a lot more singing on MR than I usually do, but that was just kind of the tip of the iceberg. Now it's like, 'OK y'all, I hope y'all are ready for what's next.'"

We most certainly are.