The Bachelorette: The Queen City sells out in the name of love

My Little Secret: A News Hound Confesses Her Bachelorette Jones

You've probably been hearing a lot about The Bachelorette or maybe even seen the film crew in your neighborhood. For the first time in its history, a season was shot outside of L.A., in Charlotte. Never ones to pass on a chance to suck from the financial jugular of opportunity, city boosters have orchestrated a "Queen City Bachelorette Getaway." Four lucky winners get to enjoy all the luxury Charlotte has to offer, including two nights at a Hampton Inn & Suites. Even the Mint Museum is in on the fun, sending press releases every time the Bachelorette so much as walks past the building.

But who am I to judge?

There's a reason why 7 million Americans, myself included, have fallen in love with Emily Maynard. Her story, the stuff reality TV producers dream of, starts with something Charlotteans know well — NASCAR.

In 2004, the now-26-year-old Emily was head over heels in love with her fiance, Rick Hendrick, of the Hendrick Motorsports empire. But just months after they became engaged, the NASCAR driver was on his way to a race with some family and friends when fog and pilot error brought their small aircraft down. There were no survivors.

Then, just a few days after the crash, something amazing happened. Emily, then 18, found out she was pregnant with Hendrick's child. She and their baby girl, Josephine Riddick "Ricki" Hendrick, now live in Charlotte.

Emily took a break from being a mom when she joined the cast of last season's The Bachelor. The endearing blonde with a country twang was an instant fan favorite, beating out the lot for Brad Womack's heart. Their finale was touching. Brad dropped to one knee and asked Emily to be his forever. Emily asked, at least with those big brown eyes, if it was all real.

They ended their engagement after rumors swirled that Brad "was far from the perfect fiance," an anonymous source told Life & Style; he would ignore his betrothed for days at a time. That is, until the day she finally told him it was over. *Finger snap.*

Riding that wave of fame, Emily became the next Bachelorette but asked producers to film in Charlotte, pretty please, so she wouldn't have to uproot 6-year-old Ricki.

Having missed this season's premiere, I watched it online at the office. Normally, I'd swoon as the studs dropped lines like, "I may have had a head injury, but there's nothing wrong with my heart." But at work, I became calloused and cynical. I hated the tears that welled in my eyes as the single dad heaved his lil' rascal in the air. I took notes on his comrades, like, "Seriously, a mushroom farmer?" and "Soooo many white people." (Coincidentally, the franchise is being sued for racial discrimination, and for good reason. Even the guy from South America looks like a frat boy.)

Aside from being scared of coming off as a slacker at work, I realized I was just embarrassed. No one would take me seriously if they knew I giggled like a teenager in heat when one of the guys donned an apron to bake cookies for little Ricki's soccer team.

The show might be a joke and a sham, but it's a lie you want to believe so badly. If Emily could find love after all she's been through, or all that Life & Style says she's been through, couldn't we all? Add in NASCAR, the plane crash, the big smile and blonde hair — it's white America's love story, Kmart commercials and all. And for one season, it's Charlotte's love story. So swoon, Charlotte. Emily picked you. 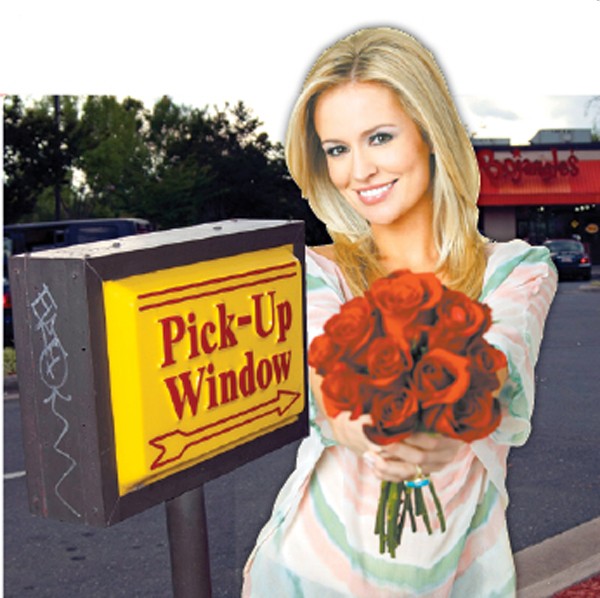 It comes as no surprise that local businesses and organizations would capitalize on The Bachelorette's setting this season in Charlotte. Recently, a marketing website for the city's visitors authority posted a contest for the chance to "experience Charlotte just like Emily Maynard and her bevy of beaus."

The winner gets a two-night stay in SouthPark along with $100 to eat at Osso, $300 for e2 Emeril's Eatery, four passes to the Mint Museum Uptown, jewelry for four from Towne & Reese and a $100 gas card. While those are some nifty prizes, is it really the way to experience Charlotte? Perhaps the contest needs a stronger dose of reality.

Here are prizes we think would better represent a real Charlotte "experience":

• We'll give you 10 people to hook up with on a whim. There's no need to make a commitment since this isn't for TV. There's also no need for a background check or rigorous application process. We're just going to pick up random people at the EpiCentre, since most of them are there to hook up anyway. Herpes? It's the gift that keeps on giving ...

• While the stars of the show are enjoying expensive dinners at Charlotte's finest dining establishments, you're more likely to dine like the crew. So, place your keister on a park bench and enjoy the savory Southern style of crispy, greasy Bojangles' fried chicken.

• You're not on television, so your hair and makeup will not be done professionally and you will not have a top-of-the-line wardrobe. Instead of standing in line for 30 minutes to get rejected at Butter, why not head to the Thirsty Beaver and knock back a couple of PBRs instead? Besides, if you're dressed to make a show of yourself at the Beaver, people will be so surprised they'll probably take pictures. Pretend they're the paparazzi.

• If you're looking for some time alone on a date, make your way to the arena for a Charlotte Bobcats game this fall. Chances are you'll have an entire seating section to yourselves and can get some emotional bonding in while you hold hands and cry over yet another loss.

• You need to look your best, so we suggest doing a little shopping in whatever venue suits your budget — whether it's SouthPark and Ballantyne or the local Goodwill. Don't worry about having to buy what you can't afford, since those bachelors are not concerned with what your pants look like — they just want to get into them.

• Emily and her date spent an evening rappelling down the side of the Mint Museum Uptown. We can't recommend this — it's illegal for real people to rappel down the side of a building Uptown, and there's no relationship longevity for dates that end in jail. Instead, have someone film you as you crawl down the street — just turn the video cam on its side and it'll look like you're going up a building. That's the way they did it on the old Batman TV series.

• We'd offer you jewelry, but is it really smart to buy expensive gifts for someone you just met? Instead, spend a quarter on a gumball machine ring and reminisce about your childhood and how they just don't make those plastic rings like they used to.

• Instead of handing out roses, take your date to an Uptown bar where you're far more likely to hear a random cover band sing "Every Rose Has Its Thorn." If that seems like too much of a shot in the dark, you can head over to Howl at the Moon and just pay them to play it.

Much like The Bachelor and Bachelorette series themselves, none of these suggestions are likely to end in a lasting relationship. After all, only four out of 23 couples from the show are still together. That's reality.

"In the second episode, Emily had the bachelors participate in a variety show. What better way to find out if a man is fit to be a good father to your child than making sure he can pull off a solid song-and-dance routine?" — Carlos Valencia (@carlos_valencia)

"This one contestant, John, who works as a data-destruction specialist, introduces himself by saying, 'I'm John, but all my friends call me Wolf.' Really? How the hell are you comfortable being a grown-ass, 30-year-old man known as Wolf? It screams, 'I did keg stands at frat parties.'" — DeVan Penegar (degenerateclt.org)

"One guy, upon first meeting Emily, forces a Cinderella situation upon her in which he places a shoe on her foot. If that happened in real life, the guy would be seen as a creep with a foot fetish." — Penegar

"Hell, one guy had a picture of Barry Bonds and Roger Clemens in his wallet." — Marks

"I was glad to see the Muppets in the second episode. Finally, some characters on the show with actual souls and personality." — Valencia