The Bodyguard, The Deer Hunter among new home entertainment titles | View from the Couch | Creative Loafing Charlotte
Switch to the mobile version of this page.

The Bodyguard, The Deer Hunter among new home entertainment titles 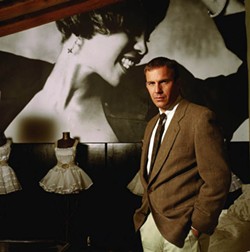 THE BODYGUARD (1992). Lawrence Kasdan, the filmmaker whose credits include the superb efforts The Big Chill and The Accidental Tourist, wrote the script for The Bodyguard back in 1975, during his off-hours from his job as an advertising copywriter. He fashioned it as a vehicle for Steve McQueen, but the screenplay didn't see the light of day until 1992, when it became a sizable hit for director Mick Jackson and stars Kevin Costner and Whitney Houston. Making her film debut, the late Houston is monotonous as Rachel Marron, a pop superstar and Oscar-nominated actress who reluctantly allows her manager (Bill Cobbs) to hire bodyguard Frank Farmer (Costner) to protect her from danger, specifically a psycho who's been sending her a series of threatening letters. The premise is workable, but the movie is sabotaged by several elements, including the hot-and-cold dialogue (most risible line, from Rachel to Frank: "A bodyguard must know little peace"), red herrings that fail to obscure the identity of the would-be assailant, and a ludicrous climax centering on an assassination attempt at the Academy Awards ceremony. The best-selling soundtrack includes Houston's rendition of Dolly Parton's "I Will Always Love You"; it's a decent, diva-formatted take, but I defy anyone to honestly tell me that it's better than Parton's gorgeous, graceful original.

Blu-ray extras include a making-of featurette; Houston's music video for "I Will Always Love You"; and the theatrical trailer.

CARNAGE (2011). How the movie version of Yasmina Reza's God of Carnage compares to the Tony Award-winning Broadway show I cannot say — Creative Loafing's budget inexplicably does not provide for me to stay a few days in New York to check it out firsthand — but this screen version is a tasty, wicked treat; to borrow a classic phrase from Sweet Smell of Success, it's a cookie full of arsenic. It takes place in the apartment of Penelope and Michael Longstreet (Jodie Foster and John C. Reilly), where they're meeting with Nancy and Alan Cowan (Kate Winslet and Christophe Waltz) to discuss the unfortunate incident wherein the Cowans' son hit the Longstreets' boy with a stick, causing severe damage to his mouth (including the loss of two teeth). The visit begins on a note of cordiality, even though hints of aggression are already bubbling around the edges of the polite chitchat. Sure enough, it doesn't take long before an all-out assault occurs, with the four adults at each other's throats. If Steven Spielberg managed to open up War Horse in a manner that takes full advantage of cinema's gifts — it's so expansive that it's easy to forget a theatrical version resides in its family tree — Roman Polanski does little to make this look like much more than a filmed play. Yet because Carnage is so well-written and performed — and because it runs a rapid 80 minutes — there's none of that stifling claustrophobia that chokes similar one-horse-town stage adaptations. Among the quartet, Waltz delivers the best performance, followed by Winslet, Foster and then Reilly lagging behind. As for Polanski, he masterfully orchestrates all the mind-game mayhem — at times, the scenario recalls a more grounded version of Luis Buñuel's surrealist romps The Exterminating Angel and The Discreet Charm of the Bourgeoisie — although he above all filmmakers constantly reminds us how important it is to separate the artist's personal life from his public offerings. Polanski has made an astounding number of fine motion pictures over the course of his career, yet I would gladly give up the very existence of this one if it meant that, instead of being free to film it, he had been properly prosecuted and were presently imprisoned for raping a child. But because Carnage does in fact exist, it receives thumbs-up for its sly dissection of middle-to-upper-class airs masking true bourgeoisie brutality.

Blu-ray extras include a making-of featurette; a discussion with Waltz and Reilly; and footage from the film's premiere.

THE DEER HUNTER (1978). Highly controversial in its day, The Deer Hunter was released in what proved to be a landmark year for Hollywood's willingness to finally make serious films that addressed the Vietnam War. Coming Home, The Boys in Company C and Go Tell the Spartans also centered on the conflict, yet it was this three-hour epic that garnered most of the ink. The film doesn't even arrive in Southeast Asia until the second hour — first, we're slowly introduced to some of the residents of a small Pennsylvania steel town, three of whom (Robert De Niro, Christopher Walken and John Savage) will soon be heading off to war. The second chapter deals with their ordeal in Vietnam (including the notorious "Russian roulette" sequence, a scripter's dramatic device that enraged the film's critics), while the final hour centers on their post-war attempts to cope with their physical and emotional handicaps. Powerfully acted (especially by Walken and Meryl Streep) and directed (by Michael Cimino), the film's depiction of a senseless war remains relevant as long as power-hungry leaders continue to play Russian roulette with the lives of young soldiers. This was the film that got the Meryl Streep Oscar ball rolling, as she earned the first of her record 17 (and counting?) nominations for her supporting turn. All told, this was nominated for nine Academy Awards (including a Best Actor bid for De Niro), and it won five, among them Best Picture, Best Director and Best Supporting Actor for Walken.

THE DOUBLE HOUR (2010). Giuseppe Capotondi made his directorial debut with The Double Hour while the picture's three screenwriters all began plying their trade in 2005. Presumably, all of these relative newbies spent the previous years watching endless cycles of twisty thrillers and taking as many notes as possible — based on the evidence of this film, though, their hands began cramping before they finished jotting down pointers on how to maintain interest from first frame to last. After a gripping (and bloody) opening, The Double Hour emerges as a mature romance between a hotel maid named Sonia (Ksenia Rappoport) and an ex-cop named Guido (Filippo Timi). But a burglary committed by a group of masked thugs ends in tragedy for the couple, and from this point forward, the film starts messing with the minds of characters and viewers alike, employing all manner of unusual clues and fake outs. Unfortunately, this is one of those labyrinthine yarns that becomes less interesting as more mysteries are unraveled, and one of the major plot pirouettes will strike many viewers as a cheat. The Double Hour obviously wants to be compared to efforts by the likes of Alfred Hitchcock, Brian De Palma and Christopher Nolan, but it's ultimately like watching a child clamoring to sit at the table of the grownups.

DVD extras include a making-of featurette and deleted scenes.

EXTREMELY CLOSE & INCREDIBLY LOUD (2011). This 9/11 melodrama was dubbed Extremely Long & Incredibly Dull by industry wags during its theatrical run, but in all fairness, it doesn't especially feel overextended (even though it runs 130 minutes) and it manages to retain some measure of interest throughout. No, its problems register more deeply than that. Based on Jonathan Safran Foer's novel, it seeks to be the definitive film centering on that tragic day but instead feels hopelessly contrived and shamelessly manipulative — a punch to the stomach rather than a balm to the heart. The central character is Oskar Schell (Thomas Horn), a young boy whose behavior suggests that he has Asperger's syndrome. Inquisitive yet socially awkward, Oskar shares a special bond with his father Thomas (Tom Hanks), with his mother Linda (Sandra Bullock) clearly placing second in the parental sweepstakes. Thomas is in one of the twin towers on Sept. 11, 2001, and it's only some time later, when Oskar discovers a key that apparently belonged to his dad, that the healing process can truly begin. Armed with precious few clues, the lad scours the Big Apple looking for the lock that matches the key, aided in his efforts by a silent neighbor (Oscar-nominated Max von Sydow) who communicates only through note cards. Marked by improbable characterizations (Bullock and von Sydow are the main victims), constantly tripping over its many gimmicks (a tambourine, a telephone answering machine, those note cards), and doggedly determined to wring tears from every foot of celluloid, EL&IC is a classic case of trying too hard, less interested in examining the legacy of 9/11 than covering every pandering base in an effort to earn those desirable year-end honors. Besides, 9/11 has already been tackled with more candor and less sensationalism in such works as The Guys, 25th Hour and, of course, United 93. Those fine efforts soberly noted the horrors and paid tribute to the heroics of that fateful day; by comparison, this picture mainly pays tribute to its ability to pat itself on the back. Still, despite getting trounced by discerning critics, this managed to wrangle a Best Picture Oscar nomination, marking it as the worst film to snag such an honor since 1992's Scent of a Woman.

Extras on the Blu-ray/DVD/UltraViolet Digital Copy set include a making-of featurette; a piece on Horn; and a look at Max von Sydow's work on this film.