The Last Picture Show, Frost/Nixon and Pillow Talk among new DVD reviews | View from the Couch | Creative Loafing Charlotte
Switch to the mobile version of this page. 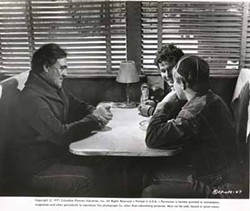 FROST/NIXON (2008). If all high school history classes were as grandly entertaining as the historical flicks penned by Peter Morgan, no student would ever again be caught slumbering in his seat. Morgan, who previously wrote The Queen, here adapts his own play, and together he and director Ron Howard open it up so that the end result feels much more vibrant than merely a constricted stage piece plunked down in front of a camera. Blessed by an exquisite cast, the two men keep the wheels turning, offering a propulsive look at the most widely loathed U.S. president until George W. Bush stumbled into sight. Set after the Watergate scandal and Richard Nixon's resignation, the picture concerns itself with the attempts of Nixon (Frank Langella) to rise Phoenix-like from the ashes of political irrelevance by holding a series of one-on-one interviews with British TV host David Frost (Michael Sheen). Nixon believes that he can easily exert control over this show biz personality, and he may be right, as Frost initially has trouble keeping up with his mentally agile interviewee. Several actors have played Tricky Dick on celluloid (Anthony Hopkins among them), but Langella bests them all with an riveting portrayal that goes beyond mimicry. He depicts the former president as a haunted man struggling to salvage his legacy, a scrappy fighter who refuses to yield even a square inch to his challengers. If many audience members don't feel the slightest bit of pity for the Nixon that Langella brings to life, that certainly isn't the fault of the actor – it's simply that too many Americans will always view Richard Milhous as monster rather than man. This earned five Academy Award nominations, including a nod for Best Picture.

DVD extras include audio commentary by Howard; a 23-minute making-of featurette; 22 minutes of deleted scenes; and footage from the actual Frost-Nixon interview.

THE LAST PICTURE SHOW (1971) / NICKELODEON (1976). Peter Bogdanovich has long faded from view as a filmmaker who matters; these days, he's mainly known as a film historian, spinning anecdotal material on DVDs holding classic motion pictures by the likes of Alfred Hitchcock, Orson Welles and Howard Hawks (all of whom he befriended during his early years as a movie critic and MOMA film curator). But for a brief period during the 1970s, he was one of the hottest directors in the land, considered part of the elite gang that also included Francis Ford Coppola, Martin Scorsese and William Friedkin.

Bogdanovich already had the excellent 1968 Boris Karloff drama Targets under his belt, but it was 1971's The Last Picture Show that announced his arrival as a major new talent, a standing that he wasn't able to sustain for long. But for this title, it's a deserving designation, as The Last Picture Show is an American classic in every sense. Working from a brilliant screenplay he co-wrote with future Lonesome Dove author Larry McMurtry (adapting his own novel), Bogdanovich takes a leisurely, loving look at the residents of a tiny Texas town in the 1950s. Filmed in black and white (reportedly at the suggestion of Orson Welles), the picture mixes its sense of nostalgia for a bygone era with its clear-eyed depiction of the sheer boredom that can penetrate the lives of small-town folks with few options available to them. The younger generation is represented by the sensitive Sonny (Timothy Bottoms), his cocky best friend Duane (Jeff Bridges) and Duane's self-centered girlfriend Jacy (Cybill Shepherd in her film debut), while the older set is repped by the sensible and respected Sam the Lion (Ben Johnson), Jacy's restless mom Lois (Ellen Burstyn), lonely coach's wife Ruth (Cloris Leachman) and wise waitress Genevieve (Eileen Brennan). In Bogdanovich's capable hands, the soap-opera elements – Sonny has an affair with Ruth, Jacy chases (among other boys) Sonny, Jacy ends up sleeping with her mom's lover, etc. – never become maudlin or sordid; instead, they provide insight into how these recognizably flawed characters combat their daily despair. Nominated for eight Academy Awards (including Best Picture), this box office hit captured statues for Best Supporting Actor (Johnson) and Best Supporting Actress (Leachman).

Bogdanovich followed The Last Picture Show with two more resounding successes – 1972's What's Up, Doc? and 1973's Paper Moon – before helming a string of gargantuan bombs that effectively ended his career (since the 1970s, he's only directed eight features over a 30-year span). Unfairly maligned among these duds was Nickelodeon, a flawed yet charming homage to the early days of moviemaking. Ryan O'Neal stars as Leo Harrigan, an inept lawyer who gets strong-armed by movie mogul H.H. Cobb (Brian Keith) into writing and (later) directing short films during the fledgling days of cinema. As if churning out an endless series of flicks wasn't stressful enough, Harrigan also has to tirelessly compete with leading man Buck Greenway (Burt Reynolds) for the hand of young ingénue Kathleen Cooke (newcomer Jane Hitchcock, in her first – and final – big-screen appearance). Tatum O'Neal, Ryan's daughter (and an Oscar winner for Bogdanovich's Paper Moon), co-stars as a spunky tomboy who develops a crush on Buck, while John Ritter essays the role of company cameraman Frank Frank. Bogdanovich based his script on the personal recollections of various veterans of silent cinema, and while many of the slapstick gags fall flat, others work quite well, and the entire cast performs with gusto.

PILLOW TALK (1959). The 1950s produced no small amount of frothy romantic comedies centering around the lives (and lifestyles) of wealthy, winsome people, and Pillow Talk proved to be one of the biggest commercial hits in this field. In their first screen pairing, Rock Hudson and Doris Day strike sparks as two New Yorkers forced to share a party phone line. Brad Allen (Hudson) is a womanizing songwriter who ties up the telephone with endless chats with a bevy of lovestruck females, much to the frustration of interior decorator Jan Morrow (Day), who needs the phone for business calls. Their war of words over the wire escalates until Brad spots Jan in a nightclub; impressed by her beauty, he sets about wooing her under false pretenses by pretending to be a hayseed from Texas. She responds favorably to his hick routine (foreshadowing the actions of the real-life Day, who would later support that Lone Star State nitwit George W. Bush in both elections), leading to a romance that pleases her perpetually hung-over maid (Thelma Ritter) but angers her persistent suitor (Tony Randall). It's impossible to imagine this movie not being presented in CinemaScope, as the widescreen format is integral in supporting the imaginative use of split-screen techniques. Nominated for five Academy Awards (including Best Actress for Day and Best Supporting Actress for Ritter), this won for Best Original Story and Screenplay. While it deserved to beat fellow contender Operation Petticoat (like Pillow Talk, co-written by Stanley Shapiro and Maurice Richlin), no cineaste would agree with it besting the other nominees (are you ready?): Ernest Lehman's Hitchcock collaboration North By Northwest, Francois Truffaut's The 400 Blows and Ingmar Bergman's Wild Strawberries!

DVD extras include audio commentary by a trio of film historians; a 22-minute retrospective piece; and a short look at the three films Hudson and Day made together.