The Nutty Professor, Red River, Rollerball among new home entertainment titles | View from the Couch | Creative Loafing Charlotte
Switch to the mobile version of this page.

FATE IS THE HUNTER (1964). Reminiscent in some ways of the 2012 Denzel Washington hit Flight, this sober drama likewise examines the circumstances surrounding an airplane mishap and whether the pilot was at fault. But whereas Washington's drunk and drug-addled flyer managed to save the plane and most of those aboard, pilot Jack Savage (Rod Taylor) fares far worse, with a crash landing killing everyone on board save for stewardess Martha Webster (Suzanne Pleshette). Thus, it's up to airline investigator Sam McBane (Glenn Ford), who's known Savage for decades, to figure out what caused the aerial malfunction and hopefully clear his friend of accusations that he was flying while inebriated. To do so, he not only interviews those close to Savage — his buddies (Wally Cox and Mark Stevens), his ex-fiancee (a juicy, unbilled turn by Dorothy Malone) and his girlfriend (Nancy Kwan) — but also decides to recreate the actual ill-fated flight. The heavy reliance on flashbacks sometimes undermines the more compelling present-day narrative — a wartime interlude featuring "Guest Star" Jane Russell as herself seems especially superfluous — but typically solid work from two perpetually underappreciated actors, Ford and Taylor, keep the proceedings (pardon the pun) grounded. Milton Krasner's black-and-white cinematography earned an Academy Award nomination, while the score marked one of the earliest big-screen credits for the late, great Jerry Goldsmith (Chinatown, The Omen, Alien).

Twilight Time's Blu-ray release also contains 2010's To Whom It May Concern: Ka Shen's Journey, a documentary about Kwan that was written, produced and directed by Twilight Time co-founder Brian Jamieson. Other disc extras consist of the theatrical trailer and an isolated score track with commentary by Kwan and film historian (and Twilight Time's other co-founder) Nick Redman.

LONE SURVIVOR (2013). Wars don't exist in a vacuum, but that's not always the case with war movies. While films like All Quiet on the Western Front, Paths of Glory and The Deer Hunter examine their conflicts in the context of the larger, usually political, picture, others (mostly World War II yarns) prefer to focus solely on the event at hand, highlighting the specifics of the mission or the heroics of the participants. Lone Survivor falls squarely into the second camp. Writer-director Peter Berg, working from the nonfiction book Lone Survivor: The Eyewitness Account of Operation Redwing and the Lost Heroes of SEAL Team 10, has fashioned a film that (presumably like its source material) has no interest in examining or commenting on U.S. policy abroad. This isn't a complex movie like 2012's excellent Zero Dark Thirty; instead, it's a straightforward look at four Navy SEALs and their efforts to stay alive during an ill-fated reconnaissance mission to Afghanistan in 2005. Berg's brand of jingoism, seen in such efforts as The Kingdom and Battleship (where even fearsome aliens were no match for the retired members of our military), has never been put to better use than in this film which shows the Navy SEAL at his fiercest and finest. Unfortunately, employing only the most minimal of brushstrokes to differentiate the men, Berg doesn't seem particularly interested in them as individuals, meaning that instead of their real-life monikers of Marcus Luttrell (Mark Wahlberg), Michael Murphy (Taylor Kitsch), Danny Dietz (Emile Hirsch) and Matt Axelson (Ben Foster), the credits might as well read "Navy SEAL 1," "Navy SEAL 2," etc. No, Berg is clearly impatient to get to the fireworks: a harrowing battle between the pinned-down SEALs and the Taliban grunts that's splendidly staged and sustained. This middle section of the movie is so riveting and feels so realistic that the final portion, when the title character finds himself in an Afghan village among Taliban haters, proves to be anticlimactic, particularly given its occasional concessions toward Hollywood formula. Ultimately, Lone Survivor is like a chain-restaurant steak: sometimes bloody, ofttimes overcooked, and generally in need of a little more sizzle.

Blu-ray extras include a making-of featurette; a piece on the stuntwork; a look at the real-life Luttrell; and a separate piece discussing all four real-life heroes.

THE NUTTY PROFESSOR (1963). In his entertaining book Alternate Oscars, author Danny Peary makes the case that the 1963 Academy Award for Best Actor should have gone to the non-nominated Jerry Lewis for his dual performances in The Nutty Professor. It's probably the most eyebrow-raising pick in the entire volume, yet anybody who bothers to check out the film might have trouble repudiating Peary's viewpoint. Far superior to the popular 1997 remake starring Eddie Murphy, this is also miles ahead of many of Lewis' other box office hits; typical of the Technicolor-saturated farces of the period (particularly those by Frank Tashlin), it goes the extra mile thanks to Lewis' innovative direction and a particularly sharp script penned by the comedian and Bill Richmond. Jerry is at his spastic best as Julius Kelp, a nerdy high school science teacher whose potion allows him to transform, Jekyll-and-Hyde-style, into "Buddy Love," a slick stud with a beastly disposition. Stella Stevens (beautiful beyond belief — and the camera knows it) is a suitable co-star for Lewis as the confused romantic interest, and the laugh-out-loud moments arrive at a fast and furious rate. The hangover scene in particular is — to borrow the movie's lingo — a real "gasser."

The 50th Anniversary (actually 51st, but who's counting?) Collector's Edition on Blu-ray comes packed with all manner of extra material. The set contains two extras Lewis films on DVD, 1960's Cinderfella and 1961's The Errand Boy; a CD of prank calls Lewis made between 1959 and 1972; a 96-page book of illustrations and quotes that Lewis originally handed out to The Nutty Professor cast and crew members; a 48-page storyboard book; a 44-page partial script with Lewis' notes; and a letter he penned for this collection. Blu-ray extras on the disc include audio commentary by Lewis; the new featurette Jerry Lewis: No Apologies; deleted scenes; screen tests; and bloopers. 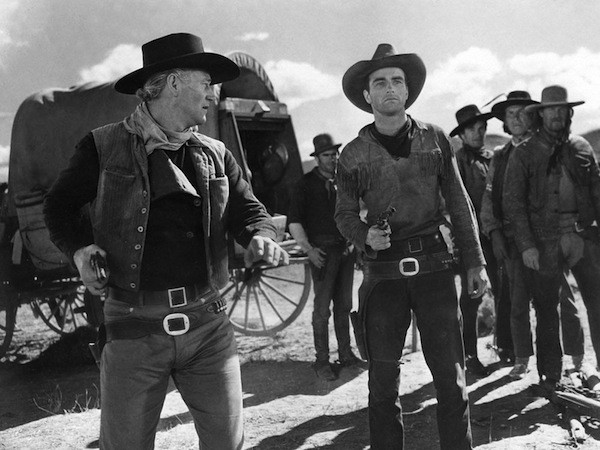 RED RIVER (1948). The great Howard Hawks has directed so many genuine classics that ranking them in preferential order would prove to be quite the daunting task; nevertheless, this Western masterpiece would surely make anybody's short list. A magnificent picture from first frame to last, it features a performance by John Wayne that's so remarkable, it led to John Ford (who had already directed the star in several films, including Stagecoach) cracking after a screening, "I never knew the son of a bitch could act!" Far from a clean-cut hero, Wayne's Thomas Dunson is a rancher who becomes more stubborn, violent and vindictive as the years pass; during the grueling cattle drive that takes up most of the running time, his surly attitude finally places him in conflict with his adopted son Matt Garth (Montgomery Clift, a beautiful, blinding light in his first year in film), a sensitive cowboy respected for his more progressive views. The movie is packed with exquisite set-pieces: the terrifying cattle stampede; the Freudian-friendly bit where Matt and fellow sharpshooter Cherry Valance (John Ireland) fondle each other's guns; Dunson's stirring speech about beef, so passionate that I'm surprised the "Beef. It's What's for Dinner" folks haven't incorporated it into their advertising; the tense face-offs between Dunson and those underlings who dare oppose him; the shenanigans of Walter Brennan's toothless coot Groot; and much more. Red River earned Oscar nominations for Best Motion Picture Story (Borden Chase, adapting his own Saturday Evening Post story Blazing Guns on the Chisholm Trail) and Best Film Editing (Christian Nyby, who later made his own directing debut with the Hawks-produced classic The Thing from Another World). Clift landed a Best Actor nod for his other 1948 release, the post-WWII drama The Search, while Wayne should have been nominated for his formidable performance here.

The Blu-ray contains both the 127-minute theatrical version (preferred by Hawks) and the 133-minute prerelease version (preferred by me, as its lengthier finale is more satisfactory). Extras include separate interviews with film critic Molly Haskell, filmmaker Peter Bogdanovich and Western scholar Lee Clark Mitchell; audio excerpts of a 1972 conversation between Hawks and Bogdanovich; and audio excerpts from a 1970 interview with Chase. The Criterion release also includes a paperback edition of Chase's story. 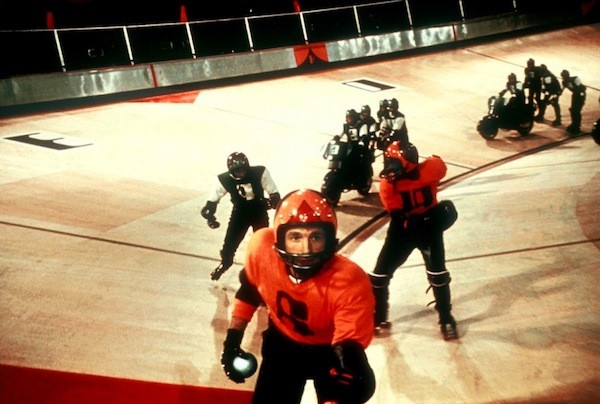 ROLLERBALL (1975). In the wake of Watergate and Vietnam, it was probably no surprise to find that the science fiction films of the 1970s — at least those before the Star Wars revolution in 1977 — almost all took place in futures in which murder is state-sanctioned, individual rights have been eroded and paranoia reigns supreme. Like Soylent Green, Logan's Run and the Planet of the Apes sequels (to name but a bare minimum), Rollerball falls into this category, centering on a United States which is being ruled solely by corporations (the film is set in 2018, but it speaks mighty loud to 2014). Wars are no more, but to keep the populace titillated, the game of Rollerball (basically a cross between roller derby and hockey) has been created to satisfy bloodlust as well as hammer home the point that individual achievement is insignificant in this brave new world. But a problem arises when Jonathan E. (James Caan), the sport's greatest player, has emerged as a celebrity in his own right; in an effort to quell the ideas that his solo efforts might inspire, the powers-that-be (repped primarily by a suitably pontifical John Houseman) decide that he must immediately retire from the game ... or else. Director Norman Jewison has far more luck with his staging of the Rollerball matches (they're at once exciting and horrifying) than scripter William Harrison has in condemning this futureworld with anything more than boilerplate lip service. Caan, however, is ideal as the star athlete who's feverishly trying to figure out the politics behind his dismissal, and, if nothing else, the film is at least much preferable to the wretched 2002 remake starring Chris Klein and LL Cool J.