The Secret is out 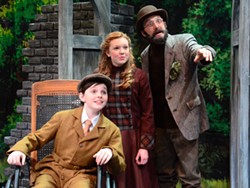 We've said it repeatedly over the past 25 years: Children's Theatre of Charlotte productions aren't just for children. Nor are they exclusively for families with children. Yet the misperception still persists — among newcomers to Charlotte and longtime residents alike — that theater presentations at ImaginOn are for children and acted by children. Well, that notion becomes more ignorant, benighted and absurd than ever with the current production of The Secret Garden.

Although Pulitzer Prize-winning playwright Marsha Norman based her book and lyrics on Frances Hodgson Burnett's children's classic, she did not aim her stage adaptation at a prepubescent audience. Nor did she trim her Tony Award-winning script to suit a child's attention span. Not counting intermission, the experience at the larger ImaginOn venue, McColl Family Theatre, clocks in at 109 minutes.

While Norman has somewhat sweetened our heroine Mary Lennox's disposition in the early going, she has turned her parents and friends — who all died of cholera — as well as her Uncle Archibald's dead wife into a chorus of ghosts led by Mary's father and Aunt Lily. She has also added suspense and conflict by turning Dr. Craven, originally a cousin, into Archibald's brother with overtly malign intentions toward Mary and her sickly cousin Colin.

The musical babble of all these ghosts takes us into a realm that lies halfway between Oz and Daphne du Maurier's Rebecca. Lucy Simon's music, adroitly wed to Norman's lyrics, was rightfully nominated for a Tony Award in 1991, but it's William D. Brohn's Drama Desk Award-winning orchestration — and Michael Kosarin's vocal arrangements — that truly lift the score into a phantasmagoric stratosphere.

Peeping into the orchestra pit, I saw the majority of the 12-piece orchestra that musical director Drina Keen is leading. Multiple keyboards and woodwinds, violin, viola, cello, bass, brass and percussion are part of the rich orchestral swirl, but there is also a cornucopia of delights for the eye. Interim artistic director Michele Long marshals CTC's technical talent, the slickest operation in town, in a dizzying, dazzling display. Connie Furr's costumes, from petticoats to pasha plumes, pop luxuriantly; and Mary Pingree's twin set design pieces span the stage, nearly reaching the flyloft at their peaks, with lush floral drops held in reserve as Lily's garden is revived.

Those mighty set pieces put on some serious mileage as the 20-member cast rolls those towers — and garden gates — around. I suspect choreographer Ron Chisholm is complicit in the scene-changing hullabaloo, for they often occur during the choral sections, adding to multi-part vocal hubbub. If the set shifts are often superfluous in ferrying us from one scene to another, they are always in keeping with the music, often augmenting the Twilight Zone vertigo of Mary's disorientation.

In this most ambitious and adult musical that Children's Theatre has ever attempted, Jason Romney's sound design is perfectly dialed in, without a squeal, a dropout or a misjudged sound level. About the only serious blemishes I could hear in all this onslaught of magnificence could be cured with a couple of soft lashes from a good dialogue coach.

Long's cast skews noticeably older for the kids in the cast than the last Children's Theatre pass at The Secret Garden, done as a straight play in 1990. The one exception is Sam Faulkner as the bedridden Colin — he's two shades too adorable, partially because he's matched with Katlyn Gonzalez as Mary and Marc Bastos as Dickon. There is no childish cutesiness about Gonzalez at all, which is quite OK if you don't come to this adaptation with expectations shaped by the novel. Gonzalez sings up a storm and deeply immerses herself in Mary's adventure, earnestly concerned by Colin's victimization, defiant toward the corrupt Dr. C, and rejuvenated by the prospect of restoring the garden. But she's often unintelligible, whereas Faulkner and Bastos are crystal clear.

Last time around, Dickon seemed to parallel another child of the Yorkshire moors, Hareton Earnshaw, the diamond-in-the-rough of Bronte's Wuthering Heights. The first adult Dickon that I've encountered is not only a decade older but pure sunshine as Bastos sings with newfound purity and vigor. Susan Roberts Knowlson is an even more powerful luminescence as Aunt Lily, the busiest busybody ghost I've ever known to go unseen by the people she haunts. In actuality, Dickon's elder sister Martha, the Craven Manor housemaid, does all the legwork in mentoring Mary, and Caroline Bower sings her brilliantly.

The Craven brothers deliver the melodrama. Although I wish to shake the brooding, self-pitying Archibald by his silken lapels, Ryan Deal makes the hunchback uncle poignant to a near-Phantom of the Opera degree with his piercing tenor. The scheming Dr. Craven is a suave monster as delivered by Chaz Pofahl, now reaching the height of his powers.

Do I need to explain that these adult roles are filled by adult professionals? Shame on you if you didn't know.

Yet it seems that Children's Theatre is aware of crossing a threshold with The Secret Garden. They're not only scheduling four Friday evening performances during this run but also two Saturday evening shows in February.

Nor is this a one-time aberration: Five of the seven performances of the new hip-hop version of The Red Badge of Courage, coming in March, will be after dark. You don't have to bring a child to appreciate the artistry of Children's Theatre of Charlotte.

You may need to brace yourself, however. When the whole ensemble is singing, and those two mighty set pieces dock like a drawbridge, I not only perceived that I was seeing a musical crafted with the trademark polish of Broadway, I felt echoes of Les Miserables — only with better music, a more concise script and less bloated self-importance.