A script that evens the score 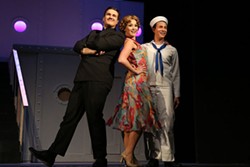 In olden days, when Cole Porter was composing his first musicals, his songs and lyrics were outstanding, the scripts written by his collaborators were superb, but the songs had only a tenuous connection to the plot.

Originally premiered on Broadway in 1934, with a book by seasoned playwrights P.G. Wodehouse and Guy Bolton — already revised by another pair of aces, Howard Lindsay and Russell Crouse — Anything Goes took on a new book when it was revived on Broadway in 1987.

The new musical tossed just one of its original songs overboard, noticeably shuffled those remaining, while adding five other Porter tunes. It ran for nearly two years on Broadway, twice as long as the original.

CPCC Summer Theatre has chosen neither of the above for its current production, opting instead for the 1962 off-Broadway revival.

The script here is largely the same as the 1934 original and the songlist has been rejiggered in the wake of the 1936 screen version starring Ethel Merman and Bing Crosby, but with far less bloating than the subsequent Broadway revival. Six new songs are welcomed aboard this sailing of the SS American, but only after five of the originals have been thrown over the bow.

If nothing we see at Halton Theater dispels the notion that a good number of the working parts in this shipboard comedy-romance are expendable or interchangeable, the quality of those parts continues to impress, even if most of them are over 80.

Over the years, I've grown to admire the book as much as the script. Navigating around 15 songs, just two of them repeated, the story delivers enough plotlines to suggest the panorama that Titantic was striving for — with considerably more laughter and less tedium.

Ministering to a capricious plutocrat who fires and rehires him with every other breath, Billy Crocker is the engine that drives the action as soon as he climbs aboard. Once there, he encounters two gorgeous reasons to sail across the ocean with his noxious boss: Hope Harcourt, the woman he's been carrying a torch for ever since their one-night romance, and nightclub sensation Reno Sweeney, an old friend and kindred spirit from Billy's less respectable days.

Under the wing of her ultra-proper mom, Hope has become engaged to the starchy Sir Evelyn Oakley, and is en route to London and her wedding. Reno is more than willing to pry Hope and the Britisher apart on behalf of her old chum, because she has instantly taken a fancy to principled and befuddled fiance — and his wealth. But Billy's most immediate obstacles will blossom into ongoing intrigue and mirth, for he doesn't have a ticket to sail or a passport.

A quite respectable bishop who comes aboard is mistakenly fingered as Moonface, and the elusive Snake Eyes doesn't show. Moonface and Billy end up pocketing the unused passports and ocean liner tickets, allowing them to sail, but that obviously doesn't end their problems.

The hulking low-life criminal must convince everyone that he really is a man of God, while Billy's new identity as the fraudulent Snake Eyes only ensures that law enforcement is chasing him, yet he must still avoid his boss to maintain his masquerade.

The sly Billy and the slimy Moonface form an alliance of convenience. Even two alliances don't seem to be enough to fulfill our hero, for Billy must still isolate Hope from her mom and fiance, woo her away from her social obligations, and legally reclaim his true identity.

When so many people need to be fooled so constantly, comedy, action and merriment are already afoot, and with a retuned songlist — adding "It's De-Lovely," "Friendship" and "Let's Misbehave" to such original showstoppers as "You're the Top," "I Get a Kick out of You," "Blow, Gabriel, Blow" and the title tune — musical delights are sprinkled throughout the voyage.

Your confidence certainly won't be shaken as you enter. The show logo replaces the entire Halton curtain on a lemony bright translucent screen, subtly pulsating with sea waves.

Perhaps director Tom Hollis peeped in on the pizzazz that choreographer Emily Hunter brought to Davidson Community Players' production of 42nd Street last summer, because he has brought her down here this season and Anything Goes bears the stamp of Hunter's voltage. But such electricity doesn't become dazzling until you see a charismatic triple threat like Ashtyn Hutchings step into it.

Hutchings has all the swagger and arrogance to keep Reno vibrant even as the show threatens to teeter too far in her direction.

While moving with devastating fluidity, Hutchings gives definitive renditions of every Reno solo, her "All Through the Night" revealing even greater heights to her range than the treacherous final eight bars of "I Get a Kick." But her star-power potential is probably most evident as she commands the stage in "Blow, Gabriel, Blow," the extravagant apotheosis of Reno and her four Angels. I can't really explain why this song bursts out. It adds nothing to the story except magnificence.

As Billy and his new confederate, Moonface, Matthew Blake Johnson and Jacob Estes operate on a more earthly plane, both likeable and tuneful, though Johnson draws most of the vocals.

A certain excess of basic wholesomeness may be necessary to stay interested in Hope, who inherits too much propriety from her mother, so Johnson's lack of guile ultimately works in his favor.

Estes only slightly shortchanges us on Broadway-sized dimwittedness, but there's enough incongruity with the delicacy of "Be Like the Bluebird" to assure comedy when Moonface lands in the brig with Billy.

I can only hope that Kelly Kohlman gets more to do in CP's upcoming Young Frankenstein, because I wanted more of her comedy skills than Bonnie allows her to bring to the stage.

Ashton Guthrie, on the other hand, has never been better at CP, bringing enough urbanity — and corruptibility — to Sir Evelyn to counterbalance his upstanding fogginess. The Ashtyn-Ashton coupling turns out to be A+.

My forecast on the notorious CP sound system can't be quite as sunny. By evening's end, I could almost identify the spot on the staircases of Robert Croghan's handsome set where singers could expect their mics to stop functioning for an instant on their way up or down.

Dialogue comes through clearly enough, but you'll need to know the lyrics beforehand to get all of Porter's wit when Drina Keen's fine orchestra begins to blare or multiple passengers aboard the SS American sing at once.

There was a mention of Mae West amid the hubbub of the climactic title song — proof that it's not the Frank Sinatra-Lady Gaga version of the lyrics. Was it the original "Anything Goes" with Rockefeller, Vanderbilt and Sam Goldwyn among the other name-droppings that you'll find on Google Play? No, the actual 1962 version that you can find on Spotify is a pastiche of what Merman and Sinatra sang with some extra blather about tennis pros. But what the ensemble is singing at CP's Anything Goes is anyone's guess.