Theater review: One Flew Over the Cuckoo's Nest 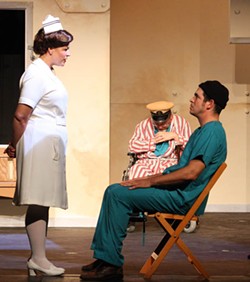 Ken Kesey's signature counterculture novel, One Flew Over the Cuckoo's Nest, turns 50 next year, so it's not surprising that the colossal power struggle between con artist Randle P. McMurphy and megalo-bitch Nurse Ratched should begin to show its age. Ratched's harpy attitude toward group therapy, tacitly supported by her superior, Dr. Spivey, strikes us as positively medieval -- even at a State Mental Institution in faraway Oregon. So it's good to be reminded, in the current Theatre Charlotte production directed by Charles LaBorde, that all this horrific shock therapy and lobotomy is happening back in 1960.

LaBorde's slight alteration, pushing back the time of the action from 1963 to 1960, chimed creepily on opening night. The serendipity wouldn't have been quite as poignant during the climactic World Series battle, McMurphy's glorious Bull Run victory in his war against Ratched, if the broadcast we heard — exquisitely briefly — were from the four-game Dodger sweep of the 1963 series. No, as the seventh game of the 2011 Fall Classic between the Cardinals and the Rangers was churning into my DVR at home, we heard the epic seventh game of the Pirates-Yankees series, the one that ended with the deathless Mazeroski blast.

Unfortunately, LaBorde only bats .500 on the creepy chills built into Dale Wasserman's stage adaptation of Kesey's novel. The whole insane mumbo-jumbo of our narrator, Chief Bromden, is wonderfully showcased by Grover Smith's original music and Trista Rothe Bremer's eerie lighting. Mountainous Matthew Corbett makes "The Combine" come alive in the Chief's ravings, appreciably more confident and vatic than he was in his first pass at the role — in the technically dazzling Victory Pictures production inaugurating the Matthews Performing Arts Center in 2001.

What's missing is the insane frigidity of Nurse Ratched. Nobody in town does catty malignity better than Donna Scott, but the zombie, Mommie Dearest paths that LaBorde steers her into just don't work as well as the icy meanness of Polly Adkins' portrayal. The decisive confrontation between Ratched and McMurphy, where she magnificently succeeds in goading him to violence, was certainly powerful enough to send a thrill through the opening night crowd, but there wasn't a trace of that tragic Billy Budd tingle that could be there when Randle succumbs. Scott isn't even slightly shaken by what she has done as we tack toward melodrama.

That's a shame, because J.R. Adduci brings more simplicity, vulgarity and spontaneity to McMurphy than anyone I've seen onstage or in film. You'll relish the difference if you've already seen Jack Nicholson's craftier, maniacal approach, and if you haven't, Adduci will seem perfectly natural as the bed he has chosen to sleep in eats him alive. The zany comedy is beautifully done with a Theatre Charlotte ensemble of lunatics and neurotics that transcends what we expect from community theater.

Savvy theatergoers will recognize Thom Tonetti, Jamie Glinski, Bill McNeff, Buddy Hanson, Ted Weiner and Jim Esposito from previous exploits at the Queens Road barn and/or with other companies around town. They are all wonderful foils for the irrepressible Adduci, especially Tonetti as Harding, the deposed ruler of the loony roost, and Glinski as Billy Bibbit, the stuttering sacrificial lamb who fatally flings away his virginity under the devastating spell of Candy Starr. Stephanie O'Neill wantonly performs the deflowering honors.

A hippy hero for generations, Kesey had the common touch. He knew that for red-blooded American males, surrendering their inalienable right to watch the World Series to a tyrannical nurse is like being kneed in the balls. In Cuckoo's Nest, this is merely a peep into the deeper horrors of Kesey's nuthouse.