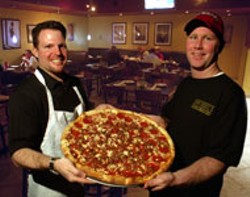 Used to be that New York-style pizza was an anomaly in Charlotte. But that was a long, long, time ago, in fact generations ago in nouvelle Charlotte time. The latest addition is a fine new pizzeria and bar that sprouted in the newest oldest part of Charlotte: Elizabeth. If you don't live in Elizabeth, you may spend some time looking for a place to park, but that will give you time to think about how nice it would be to live in Elizabeth where you could just roll out of your house/condo and walk to Hawthorne's New York Pizza & Bar. (After-hours parking is available across the street and behind the building.)

So far the 105-seat Hawthorne's, which opened in January, has had great word of mouth. On early weeknights the place is just full enough to be convivial, but not so mobbed that you spend an hour packed against a wall waiting for dinner. However, things change as the evening progresses and the bar area fills up quickly.

Hawthorne's is a joint venture of a group of New Yorkers who also own other Charlotte eateries. Co-owners and brothers John, Patrick, and Michael Adams, from Massapequa, Long Island, own Adams 7th Street Market, the deli across the street. Co-owner Danny McNally owns the Grand Central Deli & Spirits downtown, and co-owner Vince Caminiti owns Brooklyn South Pizzeria & Italian Eatery in Cornelius and Brooklyn Boys in Mooresville. Caminiti once told me "Lo sono pizzaiolo: I am a pizza man. It's inside my heart." The recipes used at Hawthorne's are a collaborative effort with Caminiti taking the lead.

The interior design was performed by Katherine Alexander and the owners. John Adams said, "We tried to keep the cinderblock characteristic of this old garage. We can open the doors during the spring and our patio is being done this week." The inside is funked up with earthtones, long black "leather" banquettes, some booths, and black-topped tables.

The owners brought down "Al the pizza guy" from the Big Apple metro area to be in charge of their mighty fine pies cooked in stone ovens. Al's pies have that smoky New York crust with a chewy, yet pliant base that some New York transplants yearn for. This pizza doesn't leave you with that overstuffed feeling that a thick crust, double cheese, gazillion topping pizza does. My only suggestion is that Hawthorne's buy pizza stands. The tables at Hawthorne's aren't big enough to handle large pie pans along with individual plates.

Also first rate are their marvelous uber chicken wings (and drums), large in size and taste. If low carb has you staying away from pizza places, Hawthorne's has many appealing salads. The baby leaf spinach salad with market bacon and hard-cooked eggs sparkled with freshness.

Among the desserts they offer are the cannoli, a "fried" Italian-style cheesecake and the unfried version. The cheesecake is not made in house. We tried the straight cheesecake to which the pantry staff was a bit overly zealous with the raspberry sauce. Less is always more.

At Hawthorne's the ambience is cool, the pizzas are great, but the best part is the idea: a corner joint (literally) with pizzas, salads, stromboli and calzones where nothing, but some of the 16-inch gourmet style pies, cost $17. It's just the kind of restaurant you want to live near, a small place with a funky bar and a friendly buzz.

Charlotte doesn't have zillions of falafel joints, or stands, in and around town, and it only has a couple of full-service Middle Eastern restaurants, and one is for sale. This is unfortunate considering the diversity of Middle Eastern food, which most savvy eatery owners now call Mediterranean.A new low-key bright spot is the 10-month-old 36-seat Ghali's Deli & Grill in the Matthews Festival Shopping Center. With just a few tables, this black and white deli makes the best chicken shawirma in town. Not sure what a shawirma is? It's part of the Ghalis' "signature Lebanese" sandwiches. Sure, they offer Reubens, including a vegetarian one, Philly Cheesesteak, gyros, even a quesadilla for people who want something familiar, but the Lebanese fare here has heart.

Ghali's shawirma has tender slices of chicken, onions, tomatoes, pickles and lettuce smeared with a light garlic sauce and stuffed into a large pita. Almost as enticing is the fattoush salad with its appealing crackle, the baba ghannoug with a hint of parsley, a fragrant kafta sandwich, and a falafel sandwich, crispy on the outside, firm, but not dry within.

The genuinely friendly owners, Jack and Mary Ghali, have lived in the Charlotte area since the 1980s when they became part of the Lebanese Christian diaspora which occurred before, during, and after the Lebanese civil war. Their son Mark, who also works there, grew up in Charlotte. Mary is the head cook and relishes making items as authentic as the diners want. Tell her you like garlic and your food will turn out perfect. If you don't, she won't add any. She plans to broaden the menu to include more grilled Panini-styled sandwiches.

Sandwiches range from $2.79 to $5.49, most entrees, inclusive of two side items, are less than 10 bucks. The Lebanese baklava ($1.59) comes from a cousin's bakery in Canada, but is so popular I haven't seen it on my multiple visits. Order more, OK?

Have a restaurant tip, compliment, complaint? Do you know of a restaurant that has opened, closed, or should be reviewed? Does your restaurant or shop have news, menu changes, new additions to staff or building, upcoming cuisine or wine events? Note: We need events at least 12 days in advance. Fax information to Eaters' Digest: 704-944-3605, or leave voice mail: 704-522-8334, ext. 136. To contact Tricia via email: tricia.childress@creativeloafing.com