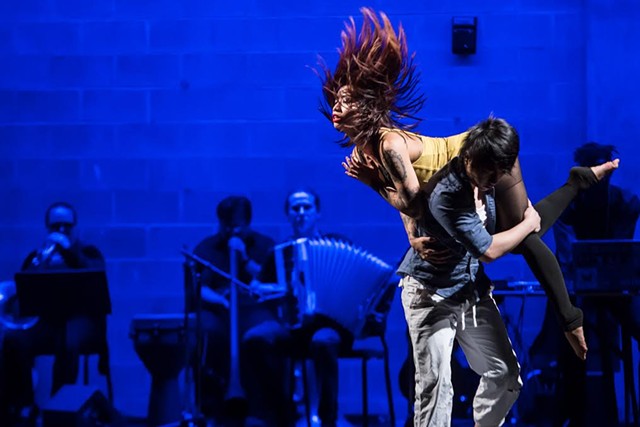 All photos of Sur by Brian BT Twitty

"Circus people are continuously searching for freedom," says CarlosAlexis Cruz. "It's a sense of weightlessness, a dream of flying — like Icarus."

The Physical Theatre Professor at The University of North Carolina at Charlotte is discussing the tension between safety and liberation embodied by his Cirque du Soleil-style acrobatic troupe Nouveau Sud ("New South"). Their latest project, Sûr: An Acrobatic Journey in Search of Safety, goes up July 21 and 22 at the Blumenthal Performing Arts Center's Booth Playhouse.

In the circus tradition, Cruz says, performers train "not to get hurt," but the danger of injury is always present. In fact, a sense of risk contributes to the pleasure derived from witnessing an acrobatic feat.

"Take a back flip," he says. "You jump backwards, and then flip through the air before landing on your feet. In Spanish, it's called Salto morto — the deadly jump. You're basically defying death by moving in a way you should not. Someone can seriously get hurt."

Part of the lure of circus performance is the empathy the audience experiences by seeing a performer overcome physical obstacles, says Cruz. That experience invites the audience to share the acrobats' triumph. It creates a bond between performer and viewer.

"We bypass the brain and communicate directly to the audience. We speak to the heart."

Now, the 36-year-old Puerto Rican native is asking his public to share a different feeling with his racially diverse troupe of performers — a sense that Charlotte may no longer be safe for its citizens.

Sûr: An Acrobatic Journey in Search of Safety pulls back the curtain on 2016 to 2017, the Queen City's ongoing year of living dangerously. Police brutality, the vilification of the Black community, increasing anti-immigration raids and roadblocks, and the disturbing tendency to see many of our neighbors as "the other" will all be addressed by Nouveau Sud through the medium of physical theater. It's time, Cruz maintains, to question what it means to be safe. It's time to stop living in fear.

"We started developing this show back in August," Cruz says. "Then in September Keith Lamont Scott was murdered, and in November Trump was elected." Soon after, Cruz began to notice not-so-subtlety shifting attitudes towards his culturally diverse troupe.

"We'd come out of rehearsals, and armed security guards would stop us to make sure we weren't troublemakers," says Cruz. "It's happened often."

Such profiling has intensified the level of fear throughout Charlotte's immigrant community, Cruz feels, and he believes communication may be the first step towards a solution.

"I think we need to start listening a little more to (our city's) communities," he says. Too often, the positions taken by Black Lives Matter, immigrant's rights advocates and citizens of color are dismissed by more privileged Charlottteans as an overreaction. People persuade themselves that the deaths of black men and Latinos at the hands of police are outliers, aberrations, the collateral damage wrought by a few bad apples. They're not, Cruz says.

"We need to stop seeing people as white or Latino or Asian. We're just people in Charlotte," he says. "We are Charlotte."

Physical theater, the province of acrobats, dancers and circus performers, is the ideal medium to deliver this message, Cruz believes.

"We can reach a larger sector without the use of words," he says. "A gesture transcends barriers."

Cruz has been breaking down barriers ever since he came to Charlotte in the summer of 2013. When the graduate of Dell'Arte International School of Physical Theatre in California and the San Francisco Circus Center first hit town, he was surprised that a city of Charlotte's size had no circus scene. He also noticed that the diversity he saw in Charlotte's performing arts community was not reflected onstage.

American art is too often tailored to the upper economic strata, he says; we see too much art for and by those who have privilege and access.

"I believe art should belong to anyone who has the talent to do it," Cruz says.

"I wanted to form a contemporary circus company, so I knew I needed to start from the ground up," he adds. So Cruz started recruiting, skipping the established dance studios because they had no experience with circus arts. He also wanted to target the talents and voices that were not being heard in the city's theater scene.

"I went to many pockets in our community, from Mexican dancers to the break dancing community to a Chinese troupe," he says.

Cruz applied for grants, too, winning the McColl Award from the Arts & Science Council in 2014. With the $25,000 grant given by the ASC once every three years for the creation of a new work of art, Cruz consolidated the core of his troupe and mounted his first show.

Staged at the Booth Playhouse in April 2016, Nouveau Sud — both the name of the troupe and its inaugural show — integrated contemporary circus arts with hip-hop and break dancing to tell the personal stories of his performers — tales of stereotyping and segregation. Today, Cruz sees his troupe's initial offering as a calling card, an effort to start tearing down the borders between communities, a public service announcement that white, Black, Latino and Asian members of the city were one population — Charlotteans.

"The idea was to talk about the ideas and misconceptions we had about each other, and to bring the diversity together onstage, and let that action communicate a message," Cruz says.

"That message was 'We are Charlotte,'" he adds. "We are a diverse troupe that comes from different angles. Ultimately we've come together for the betterment of Charlotte."

One year later, Cruz and his company are tackling the thorny issue of safety and security. Sûr: An Acrobatic Journey in Search of Safety pulls audience and performer together by first breaking down fear.

There will be people and things flying at the audience. "There are moments when the audience will think that what's coming at them may not be safe," he says.

Those daredevil moments draw on circus structure, Cruz says. They are a gambit to draw people together.

"(In circus arts) we are always playing with human fears," he says. "We are trying to transcend those fears. Hopefully we can join in a journey to overcome them together."

For Cruz, the endgame of Sûr is reclaiming empathy, a commodity often in short supply during tumultuous times.

"We lose sight of the fact that each person has a story," he says. "We never know the struggle some people are having until we listen."

He hopes that through the universal language of physical theater, audiences and performers can share challenges and successes, and come together as a community.

"We're all on a similar journey," Cruz says. "We're all experiencing the feeling that our culture is somehow less safe." Cruz and Nouveau Sud hope they can encourage the community to step up.

Sur: An Acrobatic Journey in the Search of Safety