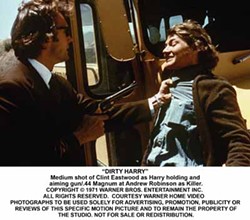 DIRTY HARRY ULTIMATE COLLECTOR'S EDITION (1971-1988). It'd be a joke (to say nothing of an obvious money-grab) were Warner Bros. ever to offer another Dirty Harry box set at any point in the future: This superb collection is as good as it's gonna get, showcasing all five titles in the series in newly remastered editions and packed to the breaking point with all manner of bonus goodies.

The first and best film in the franchise, Dirty Harry (1971) introduces us to the character of Inspector Harry Callahan (Clint Eastwood, of course), a gruff San Francisco cop who uses any means necessary (even illegal ones) to catch his man. These tactics come in handy once he tangles with a psycho killer who calls himself Scorpio (Andy Robinson effectively plays one of the screen's great villains), a giggling nutcase who mainly divides his time between sniper-shooting civilians and kidnapping children. Director Don Siegel's classic sci-fi flick Invasion of the Body Snatchers was alternately read as both right-wing (anti-Commie) and left-wing (anti-McCarthyism), and he found his controversial police thriller experiencing the same sort of dichotomy. On one hand, it's clear that Harry has little use for liberal laws that protect potential criminals (critic Pauline Kael famously called him a "fascist"), yet the character was championed by the other side for being so decidedly anti-Establishment. (And who among us doesn't side with Harry when he tortures the guilty Scorpio in order to save a little girl's life?) Either way, there's no denying the brute force of this expertly constructed picture, and the taciturn acting style of Eastwood (in a role first offered to Frank Sinatra!) helps make the classic quips (including "You've got to ask yourself one question: 'Do I feel lucky?' Well, do ya ... punk?") stand out even more.

Magnum Force (1973) finds Harry stating, "Nothing wrong with shooting as long as the right people get shot." It's a telling line, since the plot of this first follow-up deals with a gang of rogue cops (future TV stars David Soul and Robert Urich, along with Tim Matheson and Kip Niven) who work outside the law by executing criminals who have slipped through the system. They're certain that Harry would applaud their efforts, but the maverick cop finds their rigid judge-jury-and-executioner methods too distasteful even for him. Harry's stance serves to deepen the character even further, and he finds a worthy adversary in Lt. Briggs (Hal Holbrook), his humorless superior who's constantly breathing down his neck.

Harry's partners usually end up wounded or dead, and The Enforcer (1976) finds him paired with a novice officer who will be lucky to survive even one day in the field. Because of quotas that need to be met, Harry is matched with a female: Kate Moore (Tyne Daly), a desk clerk with no street experience whatsoever. It's hard to ascertain whether Harry's more peeved at being partnered with a woman or because more qualified officers were bypassed for the promotion, but he slowly softens as the pair chase after a group of militants called The People's Revolutionary Strike Force (a sign of the times, as this outfit was clearly inspired by the Symbionese Liberation Army). The presence of Kate allows a softer side of Harry to emerge, and Daly's fine performance as a committed policewoman served as a warm-up for her star-making role on TV's Cagney and Lacey.

The only film in the series directed by Eastwood himself, Sudden Impact (1983) is primarily remembered for its classic line, "Go ahead, make my day" (rapidly co-opted by then-President Ronald Reagan), yet the movie also deserves credit for wading through the same muddy waters as Dirty Harry and Magnum Force. This time, the vigilante at work is neither Harry nor other cops but ordinary citizen Jennifer Spencer (Sondra Locke), an artist seeking revenge on the five men and one lesbian who raped and beat her and her teenaged sister years earlier, leaving her sibling in a vegetative state. The most financially lucrative of the series, this was also the sixth and last film in which Eastwood starred opposite real-life girlfriend Locke. Paul Drake's turn as the chief thug is cartoonish even by the standards of this series (subtlety from actors portraying villains is a rarity in this franchise), but there's a lovable performance by Harry's latest "partner," a butt-ugly dog he names Meathead.

It's difficult to determine whether The Dead Pool (1988) is a desperate attempt to extend the franchise or a smart parody of cop films that have come before it, but either way, there's enough to enjoy in this increasingly silly film. Here, Harry learns of a betting pool in which the participants predict which celebrities on their lists will die before a determined date; Harry's name is on one of the lists, and when other famous Bay Area folks – among them a rock star, a TV talk-show host and (blasphemous!) a film critic – are murdered, the cop is forced to watch his own back a little more closely. The supporting cast is notable for its inclusion of several rising stars: future Oscar nominees Liam Neeson and Patricia Clarkson as, respectively, a horror film director and a television news reporter, and Jim Carrey (billed as James Carrey) as the ill-fated rock star. Look quickly and you can also spot cameos by the members of Guns N' Roses (whose hit "Welcome to the Jungle" is prominently used twice in the film, once lip-synced by Carrey).