With one death and at least two other accidents within a month, the Wachovia tower Uptown may appear to have experienced more construction problems than usual. But appearances don't necessarily make it so.

"This is the biggest [Uptown] job site in Charlotte history, that I know about. If you were to combine the NASCAR Hall of Fame with the Epicentre project, it would be about that big. I wouldn't say it's a disproportionate amount so far, but if a couple more accidents were to happen, I might have to," said Robby Jones, local compliance supervisor of the Occupational Safety and Health Administration.

OSHA, the federal workplace safety regulator, has been called in to investigate the Dec. 2 death of Jonathan Beatty, a 24-year-old construction worker who was struck when a tool fell down an elevator shaft at the site, which is part of an massive mixed-use development. 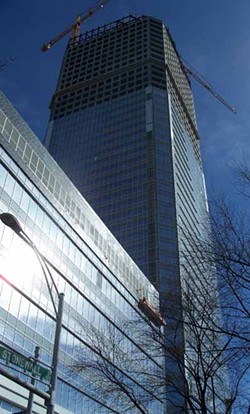 Beatty's death followed other incidents. On Nov. 10, a crane dropped two steal beams, shattering building windows and sending shards toward pedestrians and vehicles below. And on Nov. 4, a similar incident occurred. That day, Leslie Hoppes and her daughter had just left the Discovery Place and were on their way out of town when glass rained down on her car, breaking the windshield, chipping her sunroof and flattening her tires.

"The only warning we had that something was wrong was that there was already glass in the street," Hoppes said not long afterward. "And we couldn't see that until we were right on top of it."

Hoppes was frustrated by what she felt was a seeming lack of concern for safety. "What worried me was that they didn't stop cars or pedestrians," she said. "They closed down the street long enough to sweep away the glass, and they said they stopped doing whatever it was that made the glass fall.

"I just keep thinking how lucky I am that it was a rainy day, or I probably would have had my sunroof opened," she said.

Perhaps one disturbing aspect of these incidents is that, excepting the Dec. 2 death, if they didn't happen on such busy streets, they would remain private matters. Employers covered by the Occupational Safety and Health Act of 1970 are only required to report incidents to OSHA if someone dies or three or more people are hospitalized. The Nov. 11 steel beam fall is also being investigated by OSHA, yet that might only be due to media attention, Jones said. Sometimes work sites are reluctant to call regulators. "There's a lot of accidents that happen at construction sites in Charlotte that nobody will ever know about," he said.

How can it be ensured that construction companies aren't just allowed to overlook potential safety hazards up until someone gets seriously hurt? Jones said OSHA has a "good relationship" with the Charlotte Fire Department. When the department goes to a construction site for any number of reasons, they know what to look for as unsafe, and they call OSHA and give them a heads up. Jones said, "I try to do as much as I can, but we just wouldn't have the manpower to watch every work site ourselves."

The first sign of trouble at the Wachovia site happened in August when a crane tipped over and landed on the Goodyear Auto Services Center on Stonewall. The subcontractor who employed the man working the crane was issued a citation, Jones said.

When an accident is reported, OHSA workers show up at the site to conduct interviews with witnesses and to make sure everybody was complying with regulatory standards, said Jones. When they feel they have acquired enough information, the investigator compiles a report and decides whether the company running the construction site should be issued a citation. This process usually takes between four and five weeks, said Jones.

Construction companies, such as Batson-Cook, the contractor in charge of the Wachovia site, gain "credit" from OHSA when they go certain periods of time accident free, said Jones. If a company is found to have a clean record after experiencing an accident, there will usually be a ten percent cut on any citation issued, he said. If the company has a history of problems, they pay the maximum amount, according to Jones.

"There's a misconception out there that OHSA is supposed to be there to keep the job safe, but that's not true," said Jones, "It's the construction company's job to ensure the safety of their workers. We are just the safety police. We come through and make sure everybody is complying with regulations, but we've never put people on sites to watch over the work."

Since its 1970 creation, OSHA has been a somewhat controversial agency, alternately criticized by conservatives for being an onerous burden on business and by liberals for insufficient resources and enforcement.

Regardless of whatever happens, Jones said, OSHA doesn't have authority to shut down job sites.