What It Really Means to Be a Charlotte Native

Don't play into the history of erasure

I am not a native Charlottean.

I was born in Jacksonville, North Carolina. (Camp Lejeune). My family relocated to Brooklyn, New York, where I attended elementary and middle school. I moved to Charlotte only after several years at the edge of Mecklenburg County, where I attended Davidson College in 2004. I moved to an area which is now known as NoDa, although when I arrived it was referred to only as either North or East Charlotte — depending on which Charlotte native I spoke to.

At Davidson, I earned a degree in anthropology. The simplest way I describe anthropology is the study of culture and humans. The term "culture" often makes anthropology difficult to connect to for those who don't study it. Culture is one of those words we use every day but can be difficult to simplify into definition. I like to think of culture as, "How we do what we do." I believe the culture of the communities that I exist in is the single most important influencer on my physical, spiritual, and mental wellbeing.

Since September 2016 I have thought a lot about Charlotte's culture. I was intimately involved in demonstrations that followed the killing of Keith Lamont Scott. The Charlotte Uprising, as its known, has greatly impacted and accentuated conversations here in our city. What started as a spontaneous response by community members to the unnecessary — yet legally justified — killing of a black man by law enforcement grew into an organized response of people from all corners of Charlotte's community. People protested Charlotte's systemic inequities, which are propped up by a culture that demands to maintain a status quo of supremacy. 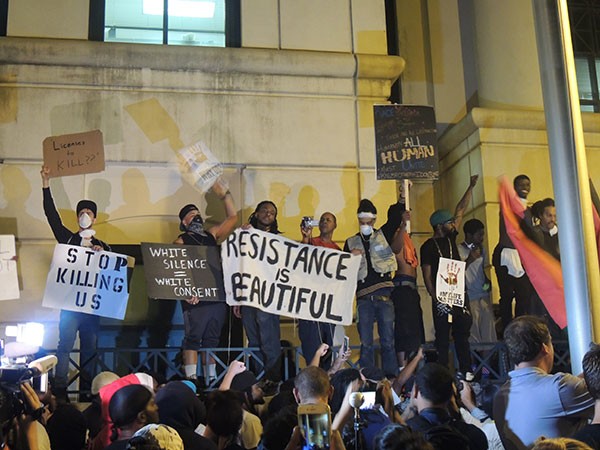 This message was so clear in the days following Mr. Scott's death, yet it was difficult to understand what that status quo was specifically. When the kinetic demonstrations ended, I took it upon myself to learn about the status quo. The culture of Charlotte today is a continuum that looks similar regardless of the time period you look at. Profits and new fancy things are held to a greater importance than the native landscape and culture here in Charlotte.

The Queen City has always been defined by the climate of economic growth. Even before European settlers came here, today's Trade & Tryon streets were an indigenous crossroads vital to the economic activity of The Greater Appalachian region. There are geographical characteristics that strategically position us to build infrastructure that connects us with different regions of this continent. That is why during The Civil War, after going relatively untouched by major battle conflicts, Charlotte became home to the Confederacy's naval yard after the one in Norfolk was destroyed by Union forces. The extensive skeleton of railways that ran through and around us provided a strategic advantage despite not being close to ocean shores.

After the Civil War, the economic growth would continue and the economic inequities would be accentuated. Again, untouched by major conflict, Charlotte did not suffer through the harsh periods of reconstruction that defined the post-war history of many southeastern American cities. We had infrastructure, a city, with wealthy families who were already anchored here and had cash. Developers and investors put up factories and mills in ways that expanded the wealth gap. There were so many new jobs in the Charlotte area that there were not enough local workers to take them. Poor, rural workers were brought in from other parts of the state and South.

But, like today, Charlotte was growing from the center out. Charlotte's gentry worked and played in close vicinity to what we now call Uptown. They did not want to see these "Lintheads" there so they built the mills and neighborhoods on the outskirts of town on places like Beatties Ford Road and North Davidson Street, where their blight couldn't be seen day to day.

Fast forward to the 1920's, around the time when the current form of our municipal government was codified, and you will read news articles of protests that often arose from seemingly simple gripes on whiskey taxes and other economic obstacles imposed on economically marginalized groups. These uprisings weren't dealt with by the heavy hand of law enforcement because those in charge would bet on the public losing interest. You can also read op-eds from the same time period maligning the tendency of Charlotte developers to knock down beautiful, old, well-built structures and replacing them with newer, cheaper and less Charlotte-specific edifices and architecture. If you go up to the top floor of the Main Library in Uptown, you can see fantastic exhibits of some of these old structures on your way to The Carolina Room, which happens to be one of my favorite places to get lost in the middle of Charlotte.

I met a man named Jimmie Lee Kirkpatrick this winter. He is a native Charlottean who integrated The Shrine Bowl with the help of Julius Chambers in 1965-66. He was just a kid then. He doesn't live here anymore. He calls Oregon home. It's a long story, a story that The Charlotte Observer has chronicled. His personal and family story encapsulates the native Charlotte experience.

Kirkpatrick, a descendant of slaves, integrated a school where he walked shoulder to shoulder with direct descendants of the slaveholders that owned his family. Of course, no one would know this until a lifetime later because people didn't talk about the ugly parts of native Charlotte, that wasn't "the Charlotte way."

I walked through The Levine Museum of The New South's Know Justice Know Peace exhibit with Kirkpatrick and I had a moment of clarity, during which my mind found itself back in those vitriolic streets of September. Thousands of us marched, chanted and cried as we walked through blocks that were once the neighborhoods that Kirkpatrick and people like him lived and played in.

But to escape the inequities of history, Kirkpatrick had to leave his Second Ward High School — now home to Mecklenburg County Aquatic Center — and ultimately, he left Charlotte altogether. We continue to develop Charlotte in this same vein, physically moving the populations we don't want here in favor of the populations we do want to see.

The traumas of the inequities of our city didn't just come about when a study found us one of the hardest places in America to escape poverty. This has been around for a long time. The numbers show that if you are born poor in Charlotte and want to move up the ladder, you are better off going somewhere else.

The discomfort of some in acknowledging the value of nativity in this place we all call home is an important point to consider. Those of us that come here are able to grab onto our very little piece of a always-fleeting pie while those of us that have been here for generations continually experience their little piece being pulled out from underneath them. It is happening all around us everyday. Until we get serious about the cyclical nature of the traumas caused by the way we do the things we do, like develop and grow, then we will be stuck in the same cycles.

We have to acknowledge that nativity doesn't hold us back, but is actually only one step in rectifying the ills of our past. Doing so also further connects us to our past in a Charlotte culture that generally tears down its past and pushes it away.

While I may not be a native Charlottean, I have children that are. There is a very good chance that at least one will always call Charlotte home. I want them to live in a city that builds upon a continuum of connection to their past. I ask this of native Charlotteans: Please, don't ever stop being loud and proud of who you are and where you come from. Like we used to say in Brooklyn, big up yourself!

There are a lot things that need to change in Charlotte. Being proud of who you are and where you come from is not one of those things.