For a review of the latest issue of Wonder Woman, check me out on the Heroes Aren't Hard to Find blog.

The Deal: It's the newest issue of Marvel's only (I think) espionage comic, starring Nick Fury ... and a bunch of other folks.

The Verdict: Look, I really enjoy this series. I really dig spy-oriented shit. I do. But, honestly, I'm not really sure what's going on in this comic. This issue makes some attempts to explain things, but the plot is still pretty convoluted. That said, Secret Wariors IS engrossing — so I'll keep picking it up.

The Deal: The latest issue of Image Comics' beloved zombie comic. You should know the deal by now.

The Verdict: I'm still loving this series and it's current direction. Judging from what happens in this issue, I think calmer things are in store for our cast of characters ... and that's a good thing. Kirkman understands that a horror book, like TWD, needs a few moments of peace to make the moments of pure gore, violence and mayhem even more gory, violent and, uh, mahemy(?). Buy it mofos!

Published by Image Comics. Written and illustrated by James Stokoe.

The Deal: It’s the first issue of writer/artist James Stokoe’s new fantasy series about a cunning orc (you know, those creatures from sword-and-sorcery-type works of fiction?) who’s better at stealing than fighting, trying to survive in a violent, blood-stained world. I think.

The Verdict: This comic works from the first page, which quickly dives right into the action (ala the first Lord of the Rings film). The lead character is interesting and morally complex; and the world Stokoe has built for the series is rich and expansive. On top of that, the art — although highly stylized — is amazing; detailed and cinematic ... kind of like Geoff Darrow mixed with Ariel Schrag. I’ve been raving about Image lately … and here’s yet another reason to rave.

The Deal: Marvel rolls out its latest blockbuster event — one that promises to offer closure on seven years worth of Avengers stories ... as well as comics like Civil War, Secret Invasion and more.

The Verdict: I guess the sign of a great comic is when you get to the last page and think: "I want more!" Well, that's exactly how I felt when finished reading Siege. Entertaining story. Incredible art. Can't wait to the second issue.

The Deal: Writer Robert Kirkman hooks up with artist/CEO Marc Silvestri and folks from the Top Cow side of Image to bring you the first salvo in the company's latest "Pilot Season" program. This particular one-shot introduces readers to a new "hero" — called Murderer I guess — who is sort of forced to hear peoples' evil thoughts ... and can only block the voices from his mind by committing homicidal acts.

The Verdict: I like the concept of Murderer; it's simple — and most great comic book ideas are fairly simple. The actual execution of the concept is pretty entertaining — a nice mix of action, tragedy, mystery, humor and heart. The art — by Sal Regla (a guy I've never heard of) — is nice; crisp and clean, yet detailed, and displaying a great command of facial expressions and emotion. I like it.

The Deal: Vertigo’s tale of an animal-human hybrid making his way across a ravaged future version of America keeps on keeping on.

The Good: You know, it’s really easy to screw up a so-called “post apocalyptic” story. Honestly, those dour tales of fucked up futures are a dime a dozen. It takes a skilled creator to elevate that type of speculative fiction from cliché to groundbreaking — and writer/artist Jeff Lemire has done just that four months in a row in Sweet Tooth. Like all great sci-fi, this title is exploding with eye-popping action and suspense, but — at the same time — is bubbling over with subtext about violence, civilization and the true nature of humanity. On top of that, Lemire makes you care about (and feel very afraid for) the characters and their fragile place in a dangerous world.

The Bad: As I’ve said before, I can see some folks not loving Lemire’s art. It’s not “pretty,” but it works with the story about an “ugly” future. Still, if you’re into artists like Jim Lee ... or even Steve Dillon ... you may not like Lemire.

The Verdict: How many times do I have to tell you to buy this comic? Just go down to the comic book shop now. Seriously. Skedaddle.

The Deal: Writer Brian Michale Bendis finally catches readers up with what ex-Dark Avenger Marvel Boy has been up to since leaving the teaming (after he found out they were psychos and villains).

The Verdict: Just when you thought Bendis didn't know what to do with Marvel Boy, he churns out a story that sets the formerly ill-defined character on a cool new path. Bachalo's art is uncharacteristically clean and clear — and the end of the comic sort of spoils the end of another blockbuster Marvel event. Anyway... buy Dark Avengers Annual.

The Deal: The villain Superboy Prime takes over Adventure Comics — a book usually starring the Conner Kent Superboy — for a Blackest Night tie-in.

The Verdict: I've said it before and I'll say it again: Superboy Prime is just too silly to be a viable villain. And now that he's trapped in a world where the DC Universe is merely a comic book story, he's even sillier. I miss Conner Kent. 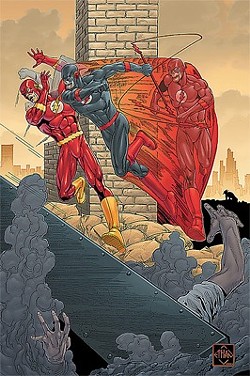 The Flash: Rebirth No. 5

The Deal: The resurrection of the original Flash (Barry Allen) and the revamp of the entire Flash family continues.

The Verdict: I can't say I'm in love with this book. This six-issue limited series seems more like a means to an end than a great comic book story. Writer Geoff Johns has given himself the mission of redefining the Flash mythology, and that's just what he's doing. Along the way, however, he's also pumping out page after page of senseless pseudo-science gobbledy gook. Still, in this month's issue, the new status quo of all the Flash-flavored speedsters comes into focus. As a result, I'm excited about what the future holds for the characters ... even though I'm not too thrilled about the present.