Culture Question the Queen City: The story of Nellie Freeman, aka 'Razor Girl'

When I was a very young child, my grandfather always enjoyed telling me and my brothers and sisters frightening stories about things that happened in Charlotte when he was a child. One particularly gruesome tale involved a teenage girl who decapitated her husband - and got away with it! Do you know anything about the case he was referring to? - Beatrice Beam, Salisbury 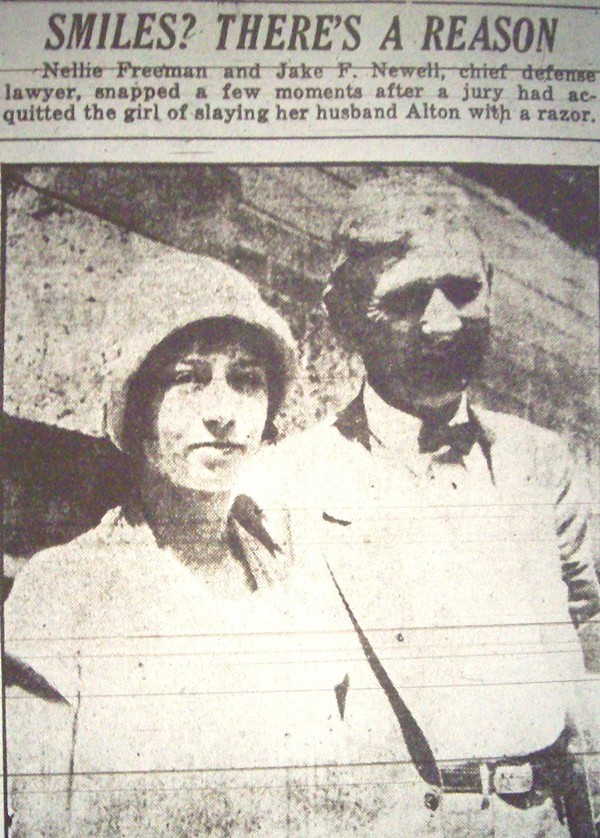 It's a true story, save for one point: Nellie Ellis Green Freeman nearly decapitated her husband. Reports indicate a flap of skin at the back of his neck was all that held poor Alton Freeman's head in place.

Nellie was married to Alton, the son of farmer Adolphus Freeman and his wife Nannie. They lied in the Camp Greene area. Alton was the youngest - and the most spoiled - of all the eight Freeman children.

What is known is that they were married only briefly, about five months, beginning sometime in late 1925 and ending abruptly on the evening of May 22, 1926, when Nellie admits that she killed Alton - accidentally, she claims - by slashing him in the throat and nearly decapitating him.

Before things came to a head, so to speak, Nellie had been working up to 10 hours a day at Nebel Knitting Mills, where she earned about $15 a week, much of which Alton would take from her.

According To Nellie, Alton had been chasing other women, refusing to find a job and was planning to leave her. A convicted auto thief, he once announced that he was going to steal some whiskey to fund his getaway from her. Alton's mother and Nellie attempted to dissuade the young man from his plans to no avail. It never came up during the trial, but Nellie confided later in life that Alton was also attempting to force her to sleep with other men to bring in more money.

Despite all of his shortcomings, Nellie insisted she loved Alton.

One day when they were alone, Nellie once again begged him to stay. When he rebuked her advances, she pulled out a straight razor and took a swipe at his throat. She claimed she didn't know how sharp the blade was and only meant to scare him and teach him a lesson.

Police arrived to find him dead in his mother's arms in the kitchen of the house on Camp Green Street, a pool of blood beneath him.

What followed can only be described as a circus.

America in the 1920s saw women as inferior and weak-minded. Popular theory dictated that females regularly experienced fits of hysteria and bouts of insanity and were therefore not in control of their own faculties. Undoubtedly aware of this stereotype, Nellie's first words to police when they arrived upon the scene were "I'm 19 years old, and I weigh less than 90 pounds." How could a small-minded, weak individual be held responsible for such an act?

Another point in her favor: the thought of executing a woman, especially a white woman, was seen as abhorrent.

Nellie would spend the next two months in jail before announcing her plea of not guilty and finally going to trial in mid-July of 1926.

During the trial The Charlotte News and Charlotte Observer took up her cause in earnest, labeling her "pretty little Nellie Freeman," "the childlike murderess" and "the forlorn, little waif."

Both the press and the public were smitten with Nellie. Reporters paid attention to nearly every detail of Nellie Freeman, even down to her choice of clothing: "Neatly garbed in a white dress of some attractive design with a close-fitting, orange-colored hat and ... scarf to match ... looking unusually dainty in her white dress, silk scarf and chic new pink hat."

Says a report from The Charlotte News: "Public Sentiment was not aroused in indignation, but rather took the turn of a sympathetic wonder at what a girl would do in an effort to relieve the situation. None condoned her act as justified, but her petite frame and audacity stood her in good steed, as far as the man on the street was concerned."

Over the course of the 10-day trial Nellie's attorneys brought in psychiatrists to testify that she was not guilty by reason of temporary insanity. One John Davidson declared that she "has the mind of a 6-year-old child." Other doctors confirmed "evidence of hereditary insanity." Further holding up their case, defense attorneys claimed, was the fact that even though she seemingly grasped the English language, she was totally ignorant of arithmetic, which led to "a lack of originality [and only] a parrot like mechanical ability."

Everyone in town, from upper-crust society, to her fellow mill workers, were fascinated by the case; masses poured into the courtroom to watch the testimony unfold. Outdoor vendors sold tiny commemorative gold-plated razor pins with Nellie's name emblazoned on them. "The blade is movable, as is appropriate with a Nellie Freeman razor, and swings loose."

Ten days after the trial began the jury returned with a verdict of not guilty. Church workers and wealthy philanthropists rallied to Nellie's aid in an effort to help her begin life anew.

Prosecutors, however, didn't buy the claim of insanity.

"I think the killing of Alton Freeman is one of the most flagrant, most volatile in my experience," said prosecutor's assistant J.D. McCall. "There verdict was laughable and ridiculous. There was no excuse for the slaying, whatever...if women like her are turned absolutely loose on the public, no man is safe."

"I want to keep the razor and the dress," she is quoted as saying. "But I don't want to talk about the trial anymore. I want to forget, if I can, the painful incidents of the past two months, and talking about it only recalls it to mind. I hope the Freemans didn't feel too hard towards me. I didn't mean to do it."

And forget she did. Nellie Freeman vanished into history, or at least from the public eye. And despite J.D. McCall's claim that no man would be safe with Nellie free, she proved him wrong.

Within a matter of days, Nellie went to stay with relatives in Kentucky. On Oct. 26, 1926, she married Samuel R. Hatley in Louisville. For a while they made their home in Concord, with Samuel's parents. They had their first son, Robert, on July 24, 1927. He once told me their story.

"When they first got married my father was a weaver in a mill," he said, his voice cracking as he remembered those difficult early days during the Depression. "We moved all over the place because he had to go where he could find work. We lived in Ranlo, Kings Mountain and Cherryville."

By 1930, the family would be back in Charlotte, living off State Street in the Enderly Park neighborhood. The woman who once attracted so much attention, the notorious "Razor Girl," now wanted nothing more than a quiet life with a loving husband and family. She even told the 1930 census taker her marriage to Hatley was her first, her maiden name was Ellis, not Green, and made no reference to her former married name.

"You couldn't have had a better mom," said Robert. "She took us to church every Sunday. She would take us for Trolley rides."

Despite the passage of time and the change in location and name, not everybody forgot about the spectacle surrounding the death of Alton Freeman. "One day I was playing outside and another kid told me that my mother had killed somebody," Robert said. "I asked her about it and she said I was too young to understand and that she would tell me about it someday. She never did. She just didn't want to talk about it."

On May 22, 1969, at the age of 64, Nellie Ellis Green Freeman Hatley died of congestive heart failure in Charlotte's Mercy Hospital. She spent more than 40 happy years with Samuel Hatley and never hurt another soul.

Despite the fact it was Nellie's hand that took Alton's life, she maintained a relationship with his parents after his death.

"She would take us to visit this elderly couple in the North Davidson area on the trolley," said Robert. "I remember we visited a few times. It was always as though she wanted to show them the children she had and the life she had. I never knew their names, but there seemed to be a genuine affection between them. I'm convinced that was the Freemans."

On a personal note, I have a theory: somewhere, hidden away in an ancient box, perhaps in someone's attic, is one of those commemorative razors. If any readers ever comes across one, let me know. I'd like to add it to my collection of historic Charlotte oddities.