Let's keep it real from the start. I'm not a fan of Justin Timberlake's music. I don't own any of his albums. I don't have one song of his on my iPod. I refuse to refer to him as "JT" and I never liked NSync either. I'm familiar with his music though because, hey, that's my job. All that being said, I do find Timberlake's appearances on Saturday Night Live funny, and I've enjoyed his collaborations with Jimmy Fallon.

So, while I was walking into Time Warner Cable Arena for his concert, my only thought was, "I bet he puts on a good show." Nearly two-and-a-half hours later, I still had no plans to buy his music and my initial thought was wrong. The guy puts on a fantastically entertaining concert.

Unlike many people in the packed downtown arena, I wasn't singing or dancing for the duration of the 28-song set. But just like everyone in the place I couldn't take my eyes off of the show. And that's what it was — a show. From start to finish, Timberlake keeps those in attendance fixated on everything he does. From dancing and running across the expansive stage, from playing a piano or keyboards or acoustic guitar to asking the crowd to sing along — put plain and simple, the guy's a star. 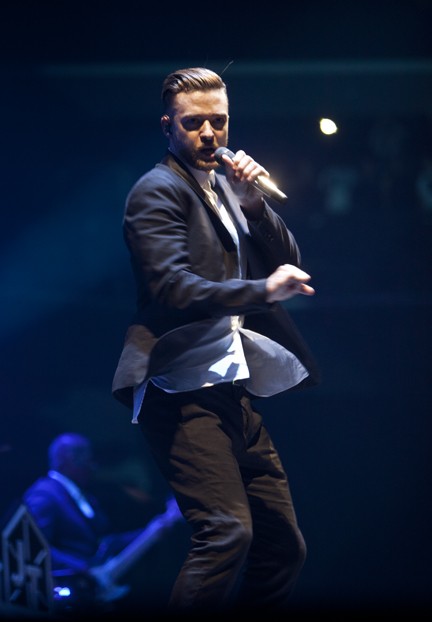 Four years ago, I watched the over-choreographed set of the Black Eyed Peas in the same location. While everything in that show appeared forced and planned, Timberlake's exuded ease and comfort.

Were parts of it choreographed? Sure, but not for an entire song. Timberlake would sing and/or dance on his own for a while before dropping back in line with a handful of dancers. The group would run through 20 seconds of choreographed moves before Timberlake would step out on his own again. With a microphone in hand, and while occasionally singing, Timberlake's movements didn't exactly line up with his dancers — and they didn't have to and, because of that, it looked more natural.

Those moments gave the entire performance the overall appearance that Timberlake was always in control and doing what he wanted — not running through pre-arranged moves or choreographed steps and banter. Feel like dancing on his own? Do it. Want to join the backup dancers? Do it. It's a comfort not only from running through a show numerous times — the setlist doesn't change — but from being a talented performer who can truly do what he wants, or at least make it look that way.

The wide stage gave Timberlake plenty of room for him to move around — and plenty of space for a large band that included four horn players, three keyboardists, four backup singers, a few guitar players, a drummer and a percussionist. At times, they would be lowered beneath the stage or rise back up, though they were always playing along. In a "it's not about me" moment, Timberlake introduced himself in band-like fashion saying, "We are JT and the Tennessee Kids."

The mostly female crowd sang and danced along to every song — and constantly called out his name — while the black-and-white-clad Timberlake did his best to acknowledge the crowd with constant smiles. 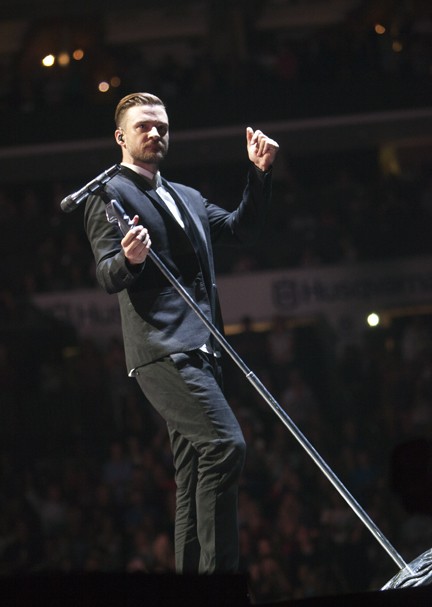 If there was any theme for the night, it was only that half of the first set's 12 songs contained the word "love" in the title. Timberlake knows how to play the pop card perfectly — getting people to sing along, dance their asses off and turn a venue into a nightclub party more than a concert.

"Y'all look like you're ready to cause trouble tonight," he told the Saturday night crowd. "We can go to church tomorrow."

A 10-minute intermission broke up the performance. After starting off with "Only When I Walk Away" Timberlake changed gears and showed off a bit of his roots. The band gathered down front for "Drink You Away" — a bluesy pop-rock song driven by acoustic guitar and horns that showed off his Tennessee blood nicely. More songs like that would earn him an entirely different fan base. 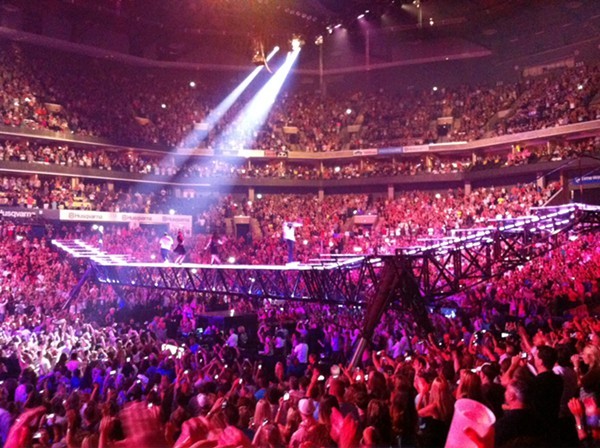 The second set started out like the first, but also featured a hydraulically lifted walkway that rose from the main stage. Timberlake ran and danced his way along the platform while it moved toward a bar setup at the back of the arena.

Once there, he shook plenty of hands, got a shot from the bar and offered a tribute to his fellow Memphis singer, Elvis with a cover of "Heartbreak Hotel." "What Goes Around... Comes Around" followed in similar acoustic fashion before things got turned up again for "Take Back the Night" as the stage rolled back to the front of the arena.

Not one to leave the crowd on a slower note, the rest of the show was upbeat as Timberlake rolled through a medley that included Kool and the Gang's "Jungle Boogie," his own song, "Murder" and Bel Biv DeVoe's "Poison." A trio of hits — "Suit & Tie," "SexyBack" and "Mirrors" closed the show.

Haters gonna hate, but the guy's got talent. He played a few different instruments, actually sang while dancing — with power and range — put on an entertaining pop music performance without the need for elaborate costume changes, and even gave a nod to the limited number of guys in attendance when he asked how many people had seen him in concert the last time he was in town with NSync. "It's OK if you weren't a fan back then," he told the male contingent.

Overall though, the party atmosphere reigned supreme. During the second set, he asked how many people were still drinking. As plenty of glasses were raised in the air, Timberlake appealed to a broader base — "It's nice to be back in the South." 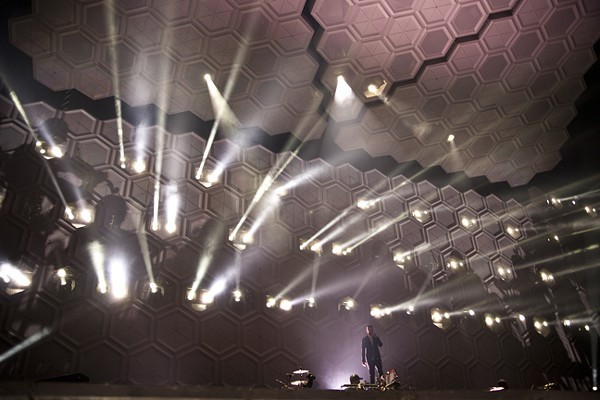 Only When I Walk Away
Drink You Away
Tunnel Vision
Señorita
Let the Groove Get In
Heartbreak Hotel
Not a Bad Thing
Human Nature
What Goes Around... Comes Around
Take Back the Night
Jungle Boogie>
Murder>
Poison
Suit & Tie
SexyBack
Mirrors