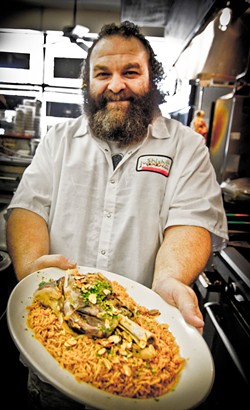 Located in an unassuming strip mall on Charlotte's colorful east side, La Shish Kebob shares its space with an Ethiopian grocery store, a Middle Eastern bakery and an African-American barbershop. But come lunchtime, patrons of those other establishments are likely to smell the roast lamb and spices distinctive to La Shish. The small eatery specializes in foods from the Middle East — Lebanon, Syria, Palestinian Territories and Jerusalem — where owner Izzat Freitekh hails from.

Upon entering, customers are greeted by a gong doorbell and boisterous welcome. If you come hungry, be forewarned: the place smells delicious, but it can be difficult discerning exactly which dish is tickling your olfactories. A glass case displays beef and lamb kabobs, and whole rotisserie chickens covered in a secret herb mix drip juice before your eyes.

La Shish Kebob opened two years ago, but Freitekh has been running kitchens since 1985. "My mom is from Lebanon, and I learned cooking from her in the beginning. Then I studied more. Now, any kind of food, I cook it," he says.

The restaurant offers some American foods, like chicken wings and cheeseburgers. All the meat is halal. Most popular is the chicken shwarma, which saw a big bump in popularity after the crave-inducing final scene of the Avengers last summer. As a Middle Eastern food snob, I gave the side-eye to numerous Yelp reviews evangelizing La Shish's version, posted by first-timers who'd never had the dish. But after ordering, I had to agree — this was the best chicken shwarma I've ever tasted.

Everything is homemade, from the falafel, hummus and baba ghannouj down to the delightfully garlicky red and green hot sauce. The food is spicy but not hot, except some items, like the Kami Kebob, named for the city in Turkey where it originates. The dish is lamb covered in a mix of flavorful ingredients that will, indeed, make you break a sweat. Like a few other offerings, the Kami is not listed on the menu, but Freitekh is glad to expound on any item in the shop.

Creative Loafing: What is the No. 1 thing you wish people knew about this type of cuisine?
Izzat Freitekh: The No. 1 question people ask is what does halal mean? Halal is the way we prepare the meat. It is fresh, and when slaughtered the animal is hung upside down for three days to drain out all of the blood. It is also refrigerated immediately, to kill all bacteria in the meat.

Is there one specialty dish you offer that isn't readily available at most other places in Charlotte?
Mansaf, a lamb cooked in yogurt, famous in Jordan and Palestine. It is served over rice that is also cooked in the lamb broth. The dish takes four hours to make, and when done the lamb is so tender it falls off the bone. I make it Friday, and it's usually gone in two hours. So it is only available on weekends. Many people pre-order it because once it's gone, it's gone until next week.

What is your one guilty-pleasure midnight snack?
I go home and eat something light, because when you make the rice and the lamb every day, you want something different when you go home. And after cooking all day, I want someone else to cook for me, so my wife will fix me a sandwich, maybe a chicken Philly.