Julia Lucas missed her shot by 4/100ths of a second 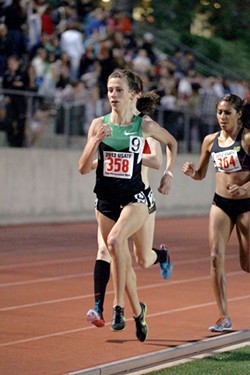 It's funny how true that little chestnut is.

My daughter, Julia Lucas, missed her recent shot at an Olympic berth by 4/100ths of a second in the women's 5K race on a recent drizzly night in Eugene, Ore.

Julia is 28 years old. She's spent half of those years running. Fifteen, 40, 100 miles a week, 40 weeks a year, for 13 years. Running on asphalt and concrete, grass, dirt, mud and gravel. In cold rain, warm rain, heat waves and through air cold enough to still the breath of a sled dog.

Running past seven stress fractures, one broken leg, through anemia, over missing toenails too ugly and numerous to count, past sleep and meals and dates with boys. She's run with an occasionally swollen ego, and less occasionally a shattered one. Running to get better and better, faster and faster. Running to be the fastest girl at Myers Park High School, at North Carolina State University, in the Atlantic Coast Conference and this great state, in our part of the country, the rest of the country, running to be her best. She ran all the way to the starting line of the Olympic Trials as the fastest American woman to run the 5K this year. And it only took 13 years.

She toed the start line fit, willing and ready for the biggest run of her life.

Julia is a hometown favorite in Eugene, and she was cheered when she took the lead with 1,000 meters to go. I could not see the finish line, but I heard the collective groan as the woman chasing Julia caught and passed her with a chest and shoulder lean at the line. I looked at Margaret — my wife, Julia's mother — and we shared a hard instant that stole a piece of our hearts. That collective groan was for Julia, and we knew it.

The stadium stilled to silence for a few seconds. The hushed rising murmur around us confirmed her unlikely loss. I stood, stunned and reeling, surprised to find my feet still holding me up. Margaret and I weaved through various no-entry zones to find Julia.

We found her 15 minutes later, on the rubber walkway between the media and athlete's tents, being escorted by an Olympic monitor to the drug testing area (as an official alternate, she's required to be tested). She looked like I felt: bound up in a world of unexpected hurt. Her mother wrapped her in a full body mother's hug. I joined with a double wrap. The Olympic Official looked away and waited.

I could not be more proud of my daughter. She has worked relentlessly for what she has achieved. Always gifted — beginning with sprints to her bus stop in Cotswold — she has repeatedly out-worked and outrun those more gifted than she.

What makes Julia a winner in the long-term — a lifetime — is her courage and resilience; her ability to rebound, reassemble and remake herself for all the many tomorrows left to come. I look forward to her next rising.

My daughter will move on, in the running world and beyond. She needs no litany of clichés to get back on her feet, or back in the saddle, or to keep her eyes on the (next) prize. That's inside her and always has been.

And she doesn't need more hugs, or cries or consoling texts, voice- or e-mails; though they keep coming and she keeps mustering the good will and grace to accept them.

And my bird-boned, lion-hearted, muscle-y daughter doesn't need her father's endless expressions of the pride and joy he feels for her giddy wins and hard losses, her courage, and for her continuing fearsome struggles.

Those are burdens she's gonna have to bear.