The city's orchestra has survived wars and recessions. Can it survive the 21st century? 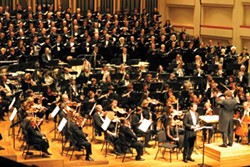 Trombonist Tom Burge arrived in Charlotte in 2006 from his hometown of Sydney, Australia, to join the local symphony. He teaches private lessons and DJs at WDAV Classical Public Radio, but his full-time job is playing in the symphony.

The music grows increasingly louder during practice at St. Luke's Lutheran Church on Park Road one chilly day earlier this month. Burge, dressed in a simple black hoodie and jeans, is having a hard time concentrating on questions he probably doesn't want to think about. Questions like, will he stay in Charlotte if the symphony shuts its doors? How will he make his mortgage if he doesn't have a steady source of income?

The Charlotte Symphony Orchestra has survived wars and recessions. It has watched, and some would argue has helped, Charlotte grow from a sleepy Southern town to the emblem of the "new South." But this year presents an unprecedented challenge for the institution, currently in its 81st season: If it doesn't raise $950,000 in donations by July, it will be forced to shut its doors for good.

The symphony's troubles started years earlier. Between 2005 and 2006, it operated with an $8.5 million budget. But after corporate donors, including local energy companies and financial institutions, and the United Arts Fund reduced donations during the recession by about $700,000 and $1 million, respectively, the symphony began losing about $2 million a year. It was forced to cut $1 million from its budget to survive and did so by decreasing staff salaries by about $250,000 and musician wages by about $750,000. It implemented hiring freezes, laid off employees and eliminated positions, all while increasing the number of concerts. In 2006, the symphony had 24 staff members. It had 18 by 2009.

Then, last November, the symphony announced the 10-year, $40 million New American Orchestra Campaign. The symphony will focus the first five years of the campaign on generating operating capital, or money used for day-to-day necessities it lost during the recession, like employee compensation. It will spend the next five building a sizeable endowment. Dividing operating-capital generation and endowment building in that order is a necessity since corporations and the arts fund supplied about a third of the symphony's operating capital, or, as Executive Director and President Jonathan Martin puts it, "just cash."

Those donors also made the Charlotte Symphony's funding model different from others around the country, which are primarily supported by individual donors. The local symphony's model, which relied on large donations, sustained it for years. So when local companies and government-supported cultural funds took a hit in the recession, so did the symphony. "In past recessions, you would see incremental drops in our ticket sales, but our basic funding models stayed intact," Martin said. "When [the most recent] recession blew that model up, that's made our circumstances now very different than in the past."

Donations, particularly large ones, are usually apportioned out throughout several years. That works for endowment building, where such donations are deposited into bank accounts, from which organizations, typically universities or nonprofits, collect earnings on a yearly basis. However, that model no longer generates enough operating capital, which explains the immediacy to raise funds.

"You can talk about building endowment all you want, but if you're not here a year from now because you didn't build operating support back up, then it's an irrelevant conversation," Martin said.

He remains hopeful of the campaign's success. So far, it's raised $1 million in donations and has seven solicitations out to corporations, foundations and individuals, whom Martin expects will respond generously. Nationally, there's been a 29-percent decrease in adults attending classical music events since the early '80s that may signal a declining interest in the music or in live events. But local ticket sales to the symphony have increased 32 percent in the past six years. Martin said that's primarily because it now offers a wider variety of entertainment, including shows that combine a visual element with music, and has increased its usefulness to the community by offering after-school children's music-education programs.

"Not only are we doing a better job of operating our business, but there's been an increasing demand for the symphony here," he said.

Those at the St. Luke's rehearsal hug, laugh and exchange small talk between warming up.

Trombonist Burge, 43, looks out at the crowd of musicians, some of whom, like him, aren't American, and explains that his green card will allow him to stay in the States should he lose his full-time gig. But if the symphony ends, many of his friends whose residency status relies on work will be both jobless and homeless.

"Many of them will be in that situation," he said.

Practice is going to start soon, so Burge politely excuses himself. Concentration replaces worry on his face as he brings his instrument to his lips. Right now, Burge just wants to keep playing.