Can independent business owners hold on as the boom continues in South End? 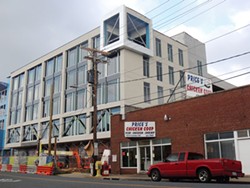 On a sunny Friday afternoon in July, hundreds of residents from Charlotte and beyond flocked to a dirt lot at the corner of Park Avenue and Camden Road where food trucks were gathered to serve the masses, as they have year-round since February 2012.

Diane McLaine drove down from Huntersville with her family and her parents, who live in Davidson. McLaine, sitting on a picnic blanket with her young daughter, said it was her first time at the event but that she would love to come again. Greg Hunt, down with his girlfriend from Concord, said, "This is our Friday night thing."

But according to multiple sources familiar with land dealings in the area, within the next two to three years the food trucks will have to find a new place to park and peddle.

Local developers and business owners told Creative Loafing ongoing negotiations should wrap up soon that will lead to the redevelopment of the entire triangle between Park, Camden and South Tryon Street, home to many locally owned businesses.

The triangle hosts the food truck lot, Common Market, Black Sheep skate shop, Modern Fabrics and other stores. Management at Common Market confirmed there are discussions happening between developers and their property owner, but they are not participating in the talks and are waiting to hear if anything is finalized.

Gaines Brown Jr. is listed as owner of the Common Market property. He is known for buying multiple properties in the area when South End began revitalizing in the '90s and leasing them to locally owned, niche companies that helped create a trendy community in the neighborhood. Brown could not be reached to comment on possible negotiations.

Common Market moved into its spot in South End in 2008 and quickly became a favorite among locals. According to owner Chuck Barger, the feeling is mutual. He said he could not comment on any negotiations, as he is waiting to hear news like everyone else, but that he hopes Common Market can find a way to stay in the neighborhood.

"That would be our desire," Barger says. "It's a great neighborhood that's been good to us, so we would definitely want to stay in the area."

Nevertheless, it's clear Common Market is doing its research on different spots they could call home within Charlotte, just in case things don't go as planned. Polls have appeared on different neighborhood groups on the social media website Nextdoor, apparently posted by Common Market management, asking residents how they would receive a new location there. Such a poll was recently posted on the page of the Oakhurst community in Cotswold and taken down days later.

Barger bounced around the question of whether this research is part of a pre-planned expansion or an answer to the possibility of needing to leave his current property.

"We think there are a lot of neighborhoods where we would do well, and that would benefit from having us there," Barger says. "We are thinking about expansion. We want to remain in South End no matter what happens here, but we are looking at other places."

Many people in Charlotte are familiar with the changing face of the South End neighborhood. Starting with the development of the Atherton Mill and Factory South in the '90s, the area went from blighted and abandoned to a hip hangout. More recently, the arrival of the light rail brought a boom of housing development, breweries and national chains like Publix and Anthropologie.

Anthony Pressley had the idea to develop Atherton Mill in the '90s and decided to keep working, along with his son, Rob, to revitalize the economy in the area.

"He was very instrumental in bringing that area of town together in a cohesive nature, and even named the community South End after visiting Dallas' North End," says Rob, currently a partner at MECA Realty. "We helped pull together the business owners and formed Historic South End (now run by Charlotte Center City Partners). It was pretty amazing. I think even dad's grandest vision would pale in comparison to what has actually occurred."

For Steven Price, owner of Price's Chicken Coop, a staple on Camden Road for over half a century, the only option is to "roll on" as he watches businesses come and go.

"We just sort of sit here and watch the world go along around us," he said.

Price owns the building that houses his nationally-recognized restaurant and said he isn't planning on going anywhere.

Price's father opened "the Coop" in 1962 and Steven said he's watched it go from a vital retail area surrounded by higher-class residential areas, to a neighborhood where "you couldn't come or go unless you were packing a pistol," to the present-day "stepping stone" for 20- and 30-somethings who live there while they build a career before moving on to the suburbs.

He watched locations like Common Market and Black Sheep move in just before development boomed, and now he's seeing that boom go off while he operates right in the blast zone. In development right next door is 1616 Center, a 75,000-square-foot office and retail development. It's already beginning to dwarf the old-style, one-story Price's building. Price doesn't mind, but said his only concern is with the roads and infrastructure surrounding all the new developments.

"The city has kind of bit themselves in the butt. They've allowed the high density but they don't do anything with the infrastructure, the traffic, the congestion. That's our concern now is people getting in and out," Price says. "We are a destination place. Yeah, we cater to the neighborhood but we've also got people coming in and when you've got the congestion and you've added all these people without doing anything with the streets, the light rail only serves a certain segment of the population."

As far as the local businesses along Camden, Price thinks they'll be gone within a few years, but he can't dwell on it.

"You have to learn to live with it and roll on. I think SouthEnd as a whole is being gentrified," Price said. "That whole row of storefronts may be gone. When you see the surveyors out and all the corners staked out like I have, you know there's something going on."

One of those businesses is Black Sheep skate shop, owned by Josh Frazier. Creative Loafing recently talked to Frazier about how the arrival of Common Market helped bring people into the neighborhood as a destination spot.

"Common Market is such an asset to this area and to Charlotte," Frazier says. "It brings a diverse crowd to the neighborhood: people who work downtown in suits, people on bikes, people on skateboards, people with tattoos, white people, black people, everybody in the world is hanging out in Common Market. We need more spots like Common Market and not less."

Frazier explained that he opened his business there in 2003 with the hopes of forming a tight-knit arts community.

"Our vision for it was a funky, eclectic, diverse, art-based neighborhood and that's why we chose to open here, because that's a part of our whole philosophy. We do art shows, we work with local artists for our graphics, we're into music, fashion, skateboarding, and to me there's a common thread there."

Frazier said he's seen the development accelerate since the light rail opened, and called it "good up to a point," but wishes the city would save some of the buildings that have been around a while.

"We've seen a lot of older architecture being torn down to build high-rise apartments and office space, and that's a little bit less exciting to a lot of people, at least our clientele, myself included," Frazier says. "Independent specialty retail is something we feel is bringing value and character to our neighborhood, beside adding apartment units. I personally feel like Charlotte has enough Starbucks and Dean & Delucas and huge grocery chains."

Developers don't agree, as just two miles south of Black Sheep demolition recently began on Sedgefield Shopping Center, which had sat at that location since 1952. Marsh Properties will open a new $190-million mixed-use development anchored by Harris Teeter — which sat in the original shopping center more than 60 years ago — in 2017. The development, which also required the demolition of 303 brick-duplex family units along a street shaded by large oak trees, will sit three blocks from the new Publix, which opened in April.

What's more, the 78-year-old building in which Black Sheep sits may have already been grabbed up by developers who are just waiting out the current leases, as multiple sources have told Creative Loafing. Frazier said he's heard similar rumors, but nothing confirmed. Brian Barwick, with property-owner and real-estate company Barwick & Associates, said he can't comment on any plans at the building due to a confidentiality agreement included in a current contract for the property.

Pressley, who was a major player in the development that brought South End's tax base from $100 million to the current $1 billion in a span of 20 years, said the removal of some of the more niche-based businesses is part of the "natural evolution" of the neighborhood.

"It will be sad that they have to relocate, but the good news is there are places for them to relocate. Even if there weren't, it's not going to have a major impact on the greater neighborhood," Pressley says. "(South End) has become an extension of Uptown. The good news is there are still neighborhoods like Plaza Midwood and Noda that have an organic feel. That won't change, it just wont be South End. At one time for South End that was the basis, but as urban living becomes hipper and cooler and more people move in, they have needs and demands that are not unlike the suburbs."

In early July, Pressley and his brother, Andy, moved the MECA offices from South End to Wilkinson Boulevard, and he said he hopes to bring the same revitalization to that corridor in the west.

"We have moved on to the next frontier. We believe very much that the growth and the things we helped build and learned from (in South End) are now getting ready to occur on Wilkinson heading west," Pressley says.

"Businesses like Common Market and Black Sheep like affordable rent in a hip area and South End is becoming more retail-modern; the retail demands are greater. Word is that all of those stores will have to move on. If you watch, those businesses will gravitate to new trendy areas. That's why we moved to Wilkinson. We plan to do it all over again."