Capsule reviews of films playing the week of Sept. 7 | Film Clips | Creative Loafing Charlotte
Switch to the mobile version of this page.

Capsule reviews of films playing the week of Sept. 7 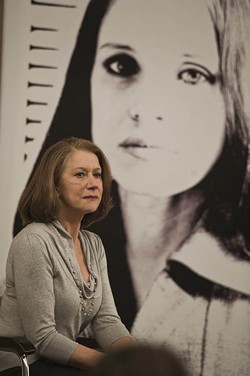 BAD TEACHER It's no Bad Santa, but Bad Teacher brings just enough naughty behavior to the table to make it a decent watch for viewers tired of PG-13 timidity. In her best role since 2005's underrated In Her Shoes, Cameron Diaz plays Elizabeth Halsey, a gold-digging middle-school teacher who, having just been dumped by her wealthy fiancé, sets her sights on substitute teacher Scott Delacorte (Justin Timberlake), who happens to be the heir to a watch-making dynasty. Elizabeth is manipulative, deceitful, insensitive and lazy, and she's forced to use all her cunning to dislodge Scott from the grip of a perpetually peppy teacher named Amy Squirrel (Lucy Punch). Meanwhile, nice-guy gym teacher Russell Gettis (Jason Segel) hangs around, hoping to get past Elizabeth's obvious disinterest in him. Hollywood, which fashions itself as a bearer of moral messages, usually feels the need to take down its flawed characters before the closing credits, with the arrogant/narcissistic/self-centered protagonist miraculously transformed into a wellspring of small sacrifices and big embraces (e.g. half of Jim Carrey's canon). To its credit, Bad Teacher doesn't resort to such shameless pandering: Like Billy Bob Thornton's Willie in Bad Santa, Diaz's Elizabeth Halsey bends but doesn't break, and the film has no need to automatically punish the wicked for their indiscretions. On the downside, the combination of a short running time, often erratic pacing, and a number of red-band-trailer moments conspicuously missing from the finished piece suggests that the studio ultimately didn't have quite enough faith in the picture to let it all hang out. This Bad Teacher is amusing enough to earn a passing mark, but we'll have to hope for an unrated director's cut on DVD/Blu-ray in order to fully gauge this school project's merit. **1/2

BRIDESMAIDS Bridesmaids can't maintain a high level of hilarity over the course of its 125 minutes, but when its game is on, it ranks among the funnier endeavors of the past few years. Judd Apatow is one of its producers, and the film certainly falls in line more with his brand of product — raunchy comedies that often reveal unexpected depths (e.g. The 40-Year-Old Virgin) — than with the usual formulaic rom-coms with female protagonists and wedding themes (e.g. the abysmal Something Borrowed). But let's be quick to steer most of the credit away from Apatow — and even director Paul Feig — and place it where it clearly belongs: at the feet of Kristen Wiig. The talented comedienne has perked up many a movie in supporting roles, and she's sensational in her largest part to date. Working from a screenplay she co-wrote with Annie Mumolo, she plays Annie, who's been chosen by her lifelong best friend Lillian (Maya Rudolph) to serve as her maid of honor. But Annie feels increasingly threatened by the presence of Lllian's new friend, the lovely and wealthy Helen (Rose Byrne), and matters soon get awkward and out-of-hand. Wiig possesses the same sort of brashness that the likes of Madeline Kahn and Bette Midler used to display in comedies, yet her more delicate features allow her to smoothly apply the brakes and ease back into the more vulnerable aspects of her characterization. As expected, the film contains a smattering of gross-out gags, yet while some are undeniably funny, they can't compete with the moments in which the laughs stem mostly from Wiig's genuine comic chops, whether it's the perfect scene involving a microphone stand-off or the sequence in which she unwisely mixes booze and pills while aboard an airplane. Granted, the actress has been around for years, but with Bridesmaids, it's not exactly inappropriate to declare that a star is born. ***

CAPTAIN AMERICA Even moviegoers suffering from superhero burnout might want to stand up and salute Captain America, which doesn't match the excellence of X-Men: First-Class but ranks ahead of fellow summer stablemates Thor and Green Lantern. I've long held a soft spot for 1991's The Rocketeer and 2004's Hidalgo, two box office underachievers that refreshingly stripped away the modern era's automatic coat of cynicism and instead delivered old-fashioned thrills with no trace of irony or condescension. Both films were helmed by Joe Johnston, and coming off the disastrous monster muddle The Wolfman, he's back in his gee-whiz element here. Chris Evans stars as Steve Rogers, a scrawny kid whose 4F status repeatedly prevents him from being accepted into the army during World War II. But responding to the youth's inner decency rather than his outward lack of muscles, a kindly scientist (Stanley Tucci) turns him into the ultimate super-soldier. The sickly Steve Rogers now sports a Charles Atlas physique, and he eventually goes after the man who has emerged as his arch-nemesis: Johann Schmidt (Hugo Weaving), a Nazi whose use of the same serum has transformed him into the appropriately named Red Skull. As expected, the movie has the requisite CGI bombast, although the most unique visual effect involved digitally altering the buff Evans so that he would appear emaciated in the early sequences — an approach that works far better than the technique for which The Curious Case of Benjamin Button managed to grab a Visual Effects Oscar. Aside from the effects, the movie generally takes a decidedly more low-key approach, both in tone and performance. Balanced enough to offer entertainment to young and old alike, Captain America should make us all proud to be moviegoers. ***