The prognosis on latest CAST production

Used to be, people who died were laid to their eternal rest. Nowadays, thanks to the wonders of modern medicine and technology, old folk who are quite alive are also laid to eternal rest in hospital rooms or nursing homes. Until the money runs out for their IV refills. That's the new reality in Lucas Hnath's ironical Death Tax, currently at Carolina Actors Studio Theatre through Dec. 16, and it causes a provocative set of situations that Maxine, her caretakers and her heirs must adjust to. 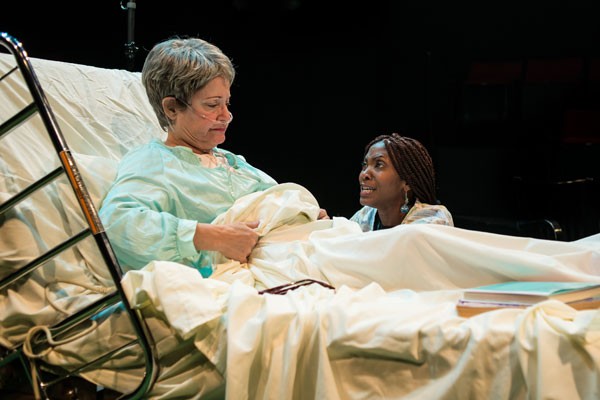 Somewhat paranoid as she watches her life trickling away, Maxine suspects her daughter of conniving to speed the process along. Here is where contemporary fiscal-cliff politics peep into this fresh script, which premiered at the 2012 Humana New Play Festival. If Maxine lives until Jan. 1, she will still be in possession of her sizable wealth, but the amount her daughter and young grandson actually inherit will be greatly reduced by new government taxes that take effect. So yes, it would make sense for Maxine's daughter to offer Nurse Tina a tempting amount of cash if she can make sure the patient doesn't survive until the new law takes its toll.

Maxine confronts Nurse Tina and, despite her credible denials, doesn't take no for an answer. A Haitian immigrant, Tina is wary of jeopardizing her chances to remain in the U.S. or to regain custody of her son, who has been abducted by her ex-husband and whisked off to their native land. But Tina is far from stupid. She's willing to tell Maxine what the daughter has offered if that's the only way to move the conversation forward to a counteroffer. It's mighty convincing: $1,000 a week until the first of the year and a $200,000 payout if Maxine survives till then.

Hnath's plotting is rather wobbly in setting up his drama. With more than $200,000 to throw away, Maxine should go directly to a hospital administrator to upgrade her care and protect herself from Tina. When a superior, Todd, does team up with Tina, agreeing to pocket half the proceeds, the leverage he has on his employee — who happens to be his former lover — is even more ludicrous. A photo has come into Todd's possession that shows Maxine handing Tina one of those $1,000 checks she has earned.

Once these hurdles are surmounted, the remaining action flows relatively smoothly. Knowing that Todd has her back, Tina can bar Maxine's daughter from visiting her — and make sure that the daughter's written renunciation of her inheritance doesn't reach the hand that's writing those tasty checks. Instead of trusting Tina, the daughter should have tried to smuggle the document into Maxine's room with her grandson, whom the nurse says is permitted to visit. But we don't always make the best decisions when the stakes are high, and perhaps the daughter is sincere when she says that reconciliation with her mom is her top priority.

We never see her again after intermission. Surprises and reversals abound in Act 2, but Hnath and CAST conspire to keep the key changes veiled in the playbill, so I'll be circumspect about these. Unfortunately, Hnath displays the timidity of emerging playwrights, hesitant to overstay his welcome. So the time necessary to develop and hammer home the full thematic import of what has happened is severely clipped — to under 40 percent of the 100-minute running time.

Fortunately, director Michael R. Simmons props up the unrefined script with compelling production values and a superb cast. Polly Adkins has perfected the ability to deliver willful, seriously flawed women to a depth where we feel compassion for them. She did it most notably in August: Osage County, and she does much the same here with the older, bedbound Maxine, beautifully fusing her selfishness with her vulnerability. Another Osage County standout, Frances Bendert, portrays Adkins' daughter, so bad-girl brazen in her confrontation with Tina that we're never sure of her ulterior motives — only that she hasn't bought this nurse before.

Nicole Watts and Robert Crozier do the remaining roles. Of their two confrontations, the one we see in Act 1 is the most sexually charged and exquisitely balanced. Todd has the power — and the evidence — to ruin Tina and her dreams of recovering her son, but she has all the sexual artillery and experience, plus the checkered past that emboldens her to go for the gusto when Maxine opens her checkbook. The dance Watts and Crozier do around each other requires cultivating a complex chemistry where domination and subjection are constantly flickering on and off. Watts alternates between poignant mommy and devastating siren while Crozier is equally adept at zigzagging between efficient professional and romantic naif.

But the hospital room is always the backdrop, wallpapered with cardiograms in Robert Lee Simmons' fine set design. So the central question hovers constantly over the action, as pervasive as the dialectic of a presidential campaign: What really is the most worthy use of our money — keeping ourselves alive or actually living?