Fan of the Opera? 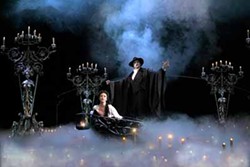 After hearing an astute theatergoer at opening night of The Phantom of the Opera declare that he liked the action and special effects but couldn't follow all the conversation -- I'm guessing he was referring to the climactic Act 1 sextet -- I chanced upon the question that pierces directly to the tension at the palpitating heart of Andrew Lloyd Webber's most ambitious creation. Was Lord Lloyd attempting to glorify opera in lush melodies and orchestrations to attract a new generation to the art form, or was he heaping ridicule and mockery upon it, attempting to bury opera forever?

There are no less than three fictional operas within the Phantom book, co-written by Richard Stilgoe and Lloyd Webber, including two that are in the Paris Opera rep and one, Don Juan Triumphant, that is imposed upon management by the lunatic Phantom. So our heroine, Christine Daaé, is an aspiring opera singer who gets her big chance at stardom when her "Angel of Music," an aspiring opera composer, achieves his evil design.

Listen to Kim Stengel sing the role of Carlotta Giudicelli, reigning prima donna at the Paris Opera, or give an ear to her perennial co-star, John Whitney as tenor Ubaldo Piangi, and you will get the impression that Lord Lloyd despises opera with a passion. The scenes from Hannibal, Il Muto, and Juan Triumphant only clarify the composer's distaste, brimming with antiquated, flamboyant and melodramatic excesses.

Yet the best of Phantom is in these same idioms. The "Masquerade" chorale, opening Act 2 with its New Year's Eve saturnalia, is everything you could ask for if Poe's "Masque of the Red Death" were done by Verdi. As hackneyed as the "Phantom of the Opera" journey to the lower depths may be with its organ runs, this Phantom-Christine duet is the crème de la crème of melodrama. And of course, the sheer spectacle of Phantom pushes the envelope, telling able practitioners of the operatic form -- are you out there? -- where they could and should take the medium.

So where does this lead me? To the delicious conclusion that the Phantom is Lloyd Webber himself. Like his roguish hero, Webber is ambivalent about opera, melodrama, and the diva he tutors. If those parallels aren't sufficient, consider: It was Lloyd Webber who elevated the original Christine, Sarah Brightman, to superstardom, writing Phantom especially for her and marrying his protégé along the way. To the discomfiture of Spouse #1.

Of course, in the three lead roles, you need true crossover talents, and the current touring production at Belk Theater has these quite bountifully. Tim Martin Gleason gives Monsieur Phantom more of a Freddy Krueger aspect than I've seen before, harder to empathize with and all the more menacing for it. The opera he writes emerges as a snare for Christine rather than a personal ambition.

Trista Moldovan is quite the songbird as Christine, not especially torn in her attitude toward the Phantom, a sensible reading given Gleason's crazed monster portraiture but not all that can be unlocked in the role. She's best as the action heats up deep into Act 2, about the time she visits Daddy's grave. Here the focus has shifted to the fulfillment of her relationship with the Vicomte de Chagny, her childhood admirer Raoul. Sean MacLaughlin traces a nice arc in the role, priggishly possessive when we first see him, dashingly intrepid at the end, with velvet vocals and standard-issue handsomeness throughout.

Costumes? Scenery? Lighting? Special effects? All spectacular, but you knew that.