Feds step in at crime-ridden strip mall in Charlotte 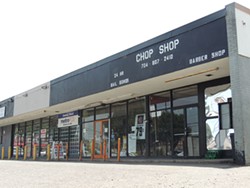 The federal government has gotten involved in a fight to reduce crime at a west Charlotte strip mall, threatening to seize the property altogether.

The strip mall, at the intersection of LaSalle Street and Beatties Ford Road, houses a multitude of businesses and has been known by police to be a hotbed for drug activity.

On June 11, federal authorities filed an affidavit stating the property may be subject to forfeiture to the United States government due to "probable cause to believe the property was used and intended to be used" to violate federal drug laws.

The U.S. Department of Justice could not comment on the ongoing investigation but said its Asset Forfeiture Program encompasses the seizure and forfeiture of assets that represent the proceeds of criminal activity or are used to facilitate federal crimes.

"In many instances, through asset forfeiture the government can disrupt or dismantle criminal organizations that would continue to function if we only convicted and incarcerated specific individuals and in a manner that enhances public safety and security," Lia Bantavani, spokesperson for the U.S. Attorney's Office in the western district of North Carolina, which filed the affidavit, says.

In the affidavit, a CMPD detective testifies the property is known as an "open air drug market" where individuals frequently loiter to buy and sell crack, cocaine, heroin and marijuana.

The detective states that some of the stores in the strip mall are associated with the criminal activity happening on the property, naming the Chop Shop barbershop and Cricket store specifically.

The strip mall rests on the corner of Washington Heights, one of Charlotte's most historic black suburbs, which opened in 1913.

"The history of the strip mall is one where small black businesses would thrive," says Tiffany Fant, a nearby resident and local businesswoman who works with Historic West End Partners, an organization that promotes economic development along the historic Beatties Ford Road corridor. "It used to have a clothing store, an ice cream shop, viable businesses that helped the community. In more recent years, it's turned into the more cookie-cutter check cashing, cellphone and convenience store location. Unfortunately, it's not really so much a gem in the community anymore."

Fant hopes the property owners – with the help of business owners and community members – can rally to curb the crime problem without needing any intervention federal authorities.

"It's a catch-22," she says. "What community doesn't want to see a drop in crime? At the same time, do you really want the federal government coming into your community? I'm all for police presence, as long as it's not an overbearing presence that hinders the sense of community."

The Cricket store named in the affidavit has since shut down. Management at a Cricket store across the street stated they are a separate entity and said the store at the strip mall was known as a drug dealing spot. The Chop Shop barbershop was padlocked on the two afternoons Creative Loafing visited the strip mall. Calls to the number listed on the storefront went unreturned.

One business owner in the strip mall, who did not want to be named, refuted allegations that some businesses are complicit in criminal activity. She still sees the strip mall as crucial to the community.

"We are here to help the neighborhood people," the woman said. "Many people come from walking distance and they don't have a lot of places to go. Nobody's doing anything illegal and it's not right."

The woman implied gentrification spreading outward from Uptown is behind motives to shut down the old strip mall.

"We are all minority business owners and we are feeling discriminated against," she said. "They just see this as a prime location and they want to take over a prime location."

Fant says she thinks some business owners are well aware of what's going on around their stores, but believes they should share some accountability for that activity with police. She says she has seen more police presence at the mall and believes oncoming development is why.

"That mall has been a part of Charlotte that's been neglected for a long time, but now with all the revamping that's been going on they have to pay attention to this part of the city and are seeing what's going on here," Fant says. "The business owners have known what's going on, but now that they're looking, the police activity is happening as it should have been."

J.D. Thomas, CMPD Metro division captain, has served in that role for just over a month, but is familiar with the Beatties Ford Road corridor. He served as sergeant of a drug unit there two years ago.

CMPD has been running undercover drug campaigns in the area, according to Thomas, targeting repeat offenders and buying three to four times from a suspect before making an arrest to ensure longer sentencing. A recent "round-up" following such a campaign in the area resulted in 21 arrests.

When told of Fant's beliefs that it will take a partnership between owners, police and residents to clean up the corner in question, Thomas agreed wholeheartedly.

"We generally try that first, and if it doesn't work we have to move to harsher measures," Thomas says.

It is unclear at this time whether the USAO will issue an indictment following the investigation and whether the remaining businesses will be able to stay open.

"Some of these business owners are doing everything they can," Thomas said, speaking about the Beatties Ford corridor in general and not the current investigation. "If they see somebody doing something wrong they call us. If you own businesses there and people are selling drugs out of your parking lot and you're calling us and doing everything you can to make sure your business is safe and not harboring people or being part of the problem itself, we're always going to work with you."

Still, it wouldn't be a stretch to think it may already be too late for the strip mall with two strikes.

"When you're a business owner and turn a blind eye or it seems like your business is a refuge, that's when your building is just as much part of the problem as everything else and that's when we take different measures."